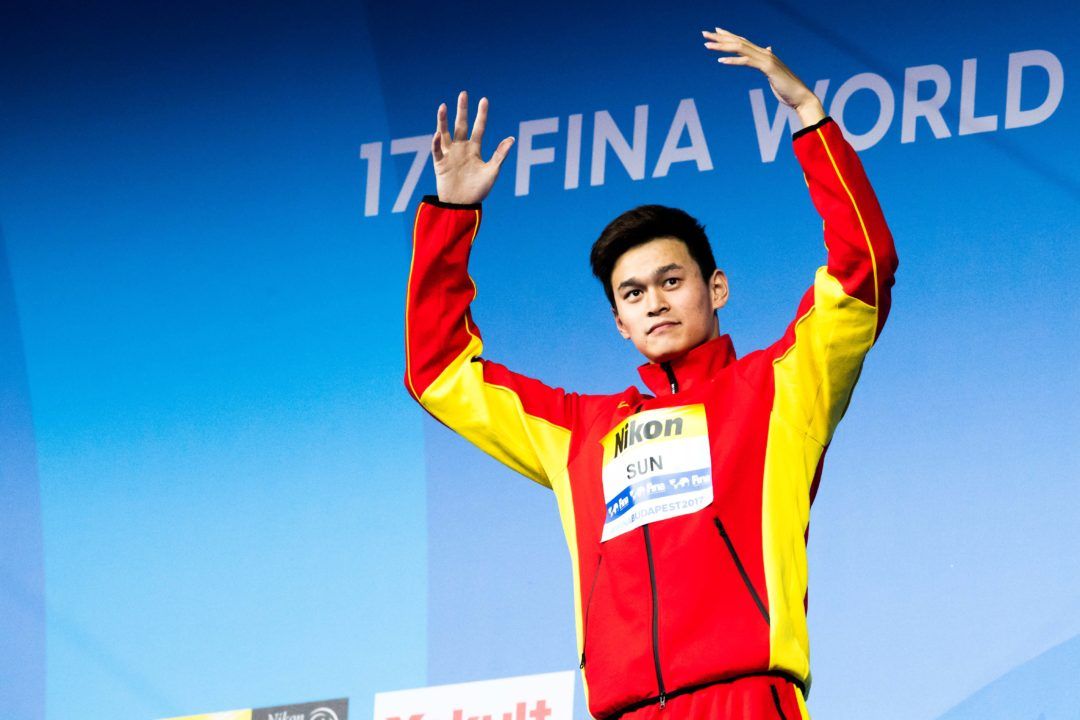 Sun Yang claimed his 2nd title of the National Games of China, winning the 200 free in 1:45.15. Controversial swimmer Qiu Yuhan is also making her mark in the women's version of the event. Archive photo via Mike Lewis/Ola Vista Photography

After head-turning swims on day 1 and 2 in Tianjin, the impressive results continued tonight at the 2017 National Games of China. Olympic champion Sun Yang, already with a 400m freestyle victory here under his belt, secured his 2nd individual title by topping the podium in the 200m freestyle.

After clocking a solid semi swim last night to earn the top seed in 1:47.84, Yang crushed the field tonight, cranking out a winning mark of 1:45.15. For perspective, Yang was 1:44.39 in Budapest and 1:44.65 at the 2016 Olympic Games, with his time tonight swift enough to have earned silver in Rio and bronze in Budapest.

The 25-year-old registered the only time under the 1:47 threshold tonight, as Ji Xinjie claimed silver in 1:47.34, followed by Xu Qiheng who touched in 1:48.03 for bronze. For Xinjie, this is his 2nd silver behind Yang at this meet after finishing behind the superstar in the 400m free as well.

Fu Yuanhui, bronze medalist at the 2016 Olympic Games, clinched the National Games title in the women’s 100m backstroke. Establishing herself as the top seed last night in 1:00.70, Yuanhui fired off a winning mark of 59.40 to represent the only swimmer under the minute mark tonight for gold.

The men’s version of the 100m backstroke race saw Xu Jiayu surge to the wall first, taking the final gold in 52.60. Although off his own national record of 51.86 from the Chinese National Championships earlier this year, Jiayu’s time of 52.60 tonight was enough to beat Zhejiang teammate, Li Guangyuan, by almost a second. Guangyuan touched in 53.50 to make it a 1-2 finish for the squad. Jiayu made history in Budapest by becoming the first Chinese male swimmer to ever become World champion in the men’s 100m backstroke.

Olympic finalist Shi Jinglin came on strong again tonight, racing her specialty, the women’s 100m breaststroke. After leading the field during last night’s semi with the only sub-1:08 mark of 1:07.64, Jinglin cranked out a winning time of 1:06.71 to win easily over He Yun who touched in 1:07.72 for 2nd. Most recently in Budapest, Jinglin managed to produce a quick 1:06.43 for 5th place, so her time tonight was within 3 tenths of that performance.

National record holder Li Zhuhao made his presence known across both prelims and semi-finals of the 200m butterfly on day 3. After clocking the top seeded time of 1:59.81 in the AM, Zhuhao produced a mark of 1:57.69 to represent the only swimmer under the 1:58 mark tonight.

Zhuhao is looking for redemption of sorts in this 200m fly event after coming up short at the World Championships. The 18-year-old only mustered a mark of 1:58.63 to find himself 21st and out of the semi-finals in Budapest, although he did finish 6th in the 100m fly in a new Chinese national record of 50.96.

There were 2 semi-finals in Tianjin tonight in the form of the women’s 200m freestyle and the women’s 200m IM. In the former, controversial swimmer Qiu Yuhan came out on top by just .01, establishing herself in the pole position with a time of 1:56.60. Zhang Yuhan was right behind in 1:56.61, while yesterday’s fireworks-producing superstar, Le Bingjie, fresh off her 400m free national and Asian record, has the 3rd seed in 1:57.25.

Yuhan raised eyebrows back in June of this year, when it was revealed the 2014 Youth Olympic double gold medalist and 2012 Olympian had tested positive for hydrochlorothiazide back in May of 2016 during an out of competition test. She was then handed out a 9-month ban, which removed her from any possible role in the Rio Olympics.

Ye Shiwen, who showed promise in the 400m IM earlier in the meet with a top seed after prelims only to find herself 6th in the final, looks to be in the hunt for the 200m IM. She produced a solid mark of 2:15.48 to set the pace in the morning and followed that up with a mark of 2:13.39 to be situated in the top-tier for tomorrow night’s final. Zhou Min and Zhang Jiqi, who earned semi times of 2:13.37 and 2:13.86, respectively, look to deny the 21-year-old a potential gold.

Bingjie 15:52 Nr now would be good for bronze at budapeste