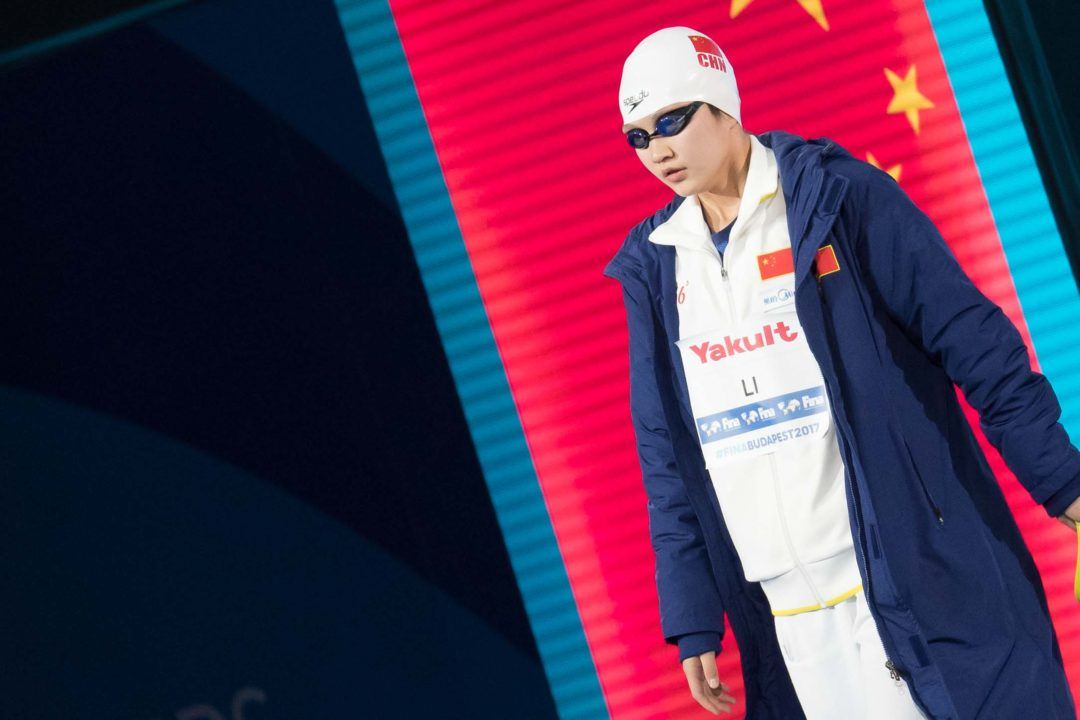 Li Bingjie raced her way to the top of the podium in the women's 400m freestyle on day 2 of the National Games of China, clocking a new national record in the process. Archive photo via Mike Lewis/Ola Vista Photography

After a commanding win in the men’s 400m freestyle last night in Tianjin to kick-off his 2017 National Games of China campaign, Olympic champion Sun Yang was back in action today to contest the 200m free event. Establishing himself as the leader early with a field-leading 1:48.36 prelims swim, Yang upped the ante in the evening, clocking a mark of 1:47.84 to take the top seed.

The next-closest competitor was Ji Xinjie, the man who captured silver behind Yang in the 400m free on night one. In this 200m event, Xinjie registered a time of 1:48.58 to land the 2nd seed, with countryman Xu Qiheng knocking on his door with a time of 1:48.65. With reigning Olympic gold medalist and World champion Yang in the field, however, the 200m free is his race to lose tomorrow night.

The men’s 100m backstroke saw both prelim and semi heats transpire today, with Xu Jiayu making his presence known. After clocking a solid 55.31 in the morning, the national record holder earned a speedy 55.04 to establish himself as the 2nd seed behind Li Guangyan‘s time of 54.78, the only sub-55 second outing of the field. Jiayu made history in Budapest by becoming the first Chinese male swimmer to ever become World champion in the men’s 100m backstroke, so look for him to come on strong come tomorrow’s night’s final race.

The women also contested the 100m backstroke today in Tianjin, with China’s Olympic bronze medalist from Rio, Fu Yuanhui, taking the top seed. After touching in 1:00.63 in the morning, the national record holder maintained her position with a very similar time of 1:00.70 at night to be the one to beat in the event.

Olympic finalist Shi Jinglin was in the pool today as well, racing her specialty, the women’s 100m breaststroke. She leads the pack with the only sub-1:08 mark on the day, taking the pole position in 1:07.64. Most recently in Budapest, Jinglin managed to produce a quick 1:06.43 for 5th place, so look for the 24-year-old Jiangsu athlete to hack off even more time tomorrow night.

In terms of event finals, fireworks flew in the women’s 400m freestyle, where Li Bingjie fired off a monster time of 4:01.75 to take gold by almost 3 solid seconds, while also cranking out a new Chinese national record. This morning, Li produced a nice prelims swim of 4:08.15 to take lane 4, only to hack off just over 6 seconds to take things down to a new level of 4:01.75, the first time a Chinese woman has ever delved into sub-4:02 territory. The previous national record stood at 4:02.35 from Chen Qian from this same meet back in 2009.

Entering the meet, Li’s fastest effort was the 4:02.52 she collected at Chinese Spring Nationals, a time that was already within two tenths of the national record. She then earned bronze at the 2017 FINA World Championships behind gold medalist Katie Ledecky (USA) and silver medalist Leah Smith (USA), racing her way to a mark of 4:03.25. Her time tonight not only beats both of those efforts, but would have garnered bronze at the 2016 Olympic Games.

The other women’s final came in the form of the 100m butterfly, where Zhou Yilin took a hard-fought gold among a very tight field. With the top 5 seeds all entering tonight’s race with times within .7 seconds of one another, Yilin was able to rise above and charge to the wall first in 57.41. That was just .03 ahead of silver medalist tonight Zhang Yufei, who touched in 57.44 for the only other sub-58 outing of the pack. Bronze tonight went to Olympic finalist Lu Ying in 58.18 carrying outside smoke from lane 1.

For the men’s 100m breaststroke final, national record holder Yan Zibei got the job done in 59.23, a time slower than his semi-final last night. In that semi, Zibei registered the only sub-59 second mark of the evening in 58.97, a mark just .05 off of the national record he clocked in April of this year. However, his time today was still quick enough to hold off Tan Haiyan who cruised to a silver medal in 59.57.

Finally, the squad from Liao Yu Guangdong took the men’s 4x100m freestyle relay in 3:14.70, while Team Zhejiang & Hong Kong finished less than half a second behind in 3:15.09 for silver. Beijing-Tianjin-Hebei-Shanghai men were next in line for bronze in 3:18.25. Splits and relay swimmers were not available at time of publishing.

Li Bingjie looks like a 15 year old, is not afraid to attack races as she showed in Budapest, and like her compatriot Ai Yanhan, has beautiful technique. Her progress has been steady and consistent. There’s no reason to believe she is doping.

she looks very legit to me too . Talented with a very nice stroke .

Hope she continues to improve, she and Leah could push each other under 4 and Ledecky could have some challengers and she always swims well when challenged. Worried she may follow the Chinese trend of phenomenal as a junior but unable to match as she gets older but hoping she can at least improve through 2020.

Why are chinese so good at distance free? Its quite a spectacle.

The same with Italians.

Why are so many of their swimmers so good at big meets in China, but not major international competitions?

There must be something in the water

two silver and one bronze medals in Budapest

Carson Foster is the same age and did that in the 200 back- a much shorter event.

This comp decides the funding for the various sports & centres . Its their pathway .

Because winning a medal at these Games is not just a medal, its a life-changing event for them: financially, culturally, and social status…

I obviously don’t understand, but why wouldn’t a world championship performance have done the same thing?

Because winning in China in front of your peers is 1000 more important than at Worlds. You’d have to live here (I live in China) long enough to really understand the culture and the values they place on “face” and success in their home country…

Many havent got the memo yet – i got it . I understand the degree of importance it has for them , not for other nations necessarily .

If she also drops time in the 800, she’s going to be the first real challenger to Ledecky. She’ll be sub 8:10 by Tokyo.

Yeah I don’t know if her turns have improved but if she has improved her turns off the wall then going a sub 8:10 is not out of the question. She has a pb of 8:15 now so taking half a second off the walls off each turn could mean hacking off over 5 or 6 seconds off her pb to bring her to a time of at least 8:09.

Bad calculation on my part. Hacking off half a second off each turn on the walls is an 8 second drop in the 800 free. So that means an 8:07 for her in theory, based on her 8:15 pb.
Unlikely at the moment. But if her turns have improved. Who knows what could happen.

why stop there, if she can speed up each turn by a second she could break 8:00.

If she just turns at the flags every time she’ll cut even more time.

Are you talking about ledecky?
Breaking 8 minutes ?

Interesting, Tan Haiyan’s time would have won him gold at the world juniors in the breaststroke…

To Chinese swimmers, National Games is more important than Jr Worlds. In fact, I don’t think China even sent a team to Indy, as the two meets are so close. No surprise to see some fast times by 18U Chinese swimmers that would medal or even win at the Jr Worlds.

China had a team in Indy

She will probably go for Jr olympics next Year i would not be surprised by a sub-4 and 8:10 by them..

Yeesh. Ledecky level time drops are inhuman. We can’t be applying those to any swimmer

Still think Ledecky will have dropped 1500 by then and be focusing on 400-800m. Will be close with li in 400 IF li can continue improvement

No way Ledecky drops 1500 in 2020. She’s going to cement her legacy by being the first woman to win the 1500 at the Olympic games. I can see her dropping it after that though

Are you kidding? For all intents and purposes, she’s THE single biggest reason the women’s 1500 was added. No way she drops it.