2017 NCAA Division III Men: Scoring the Psych Sheet – Can Denison Do It Again? 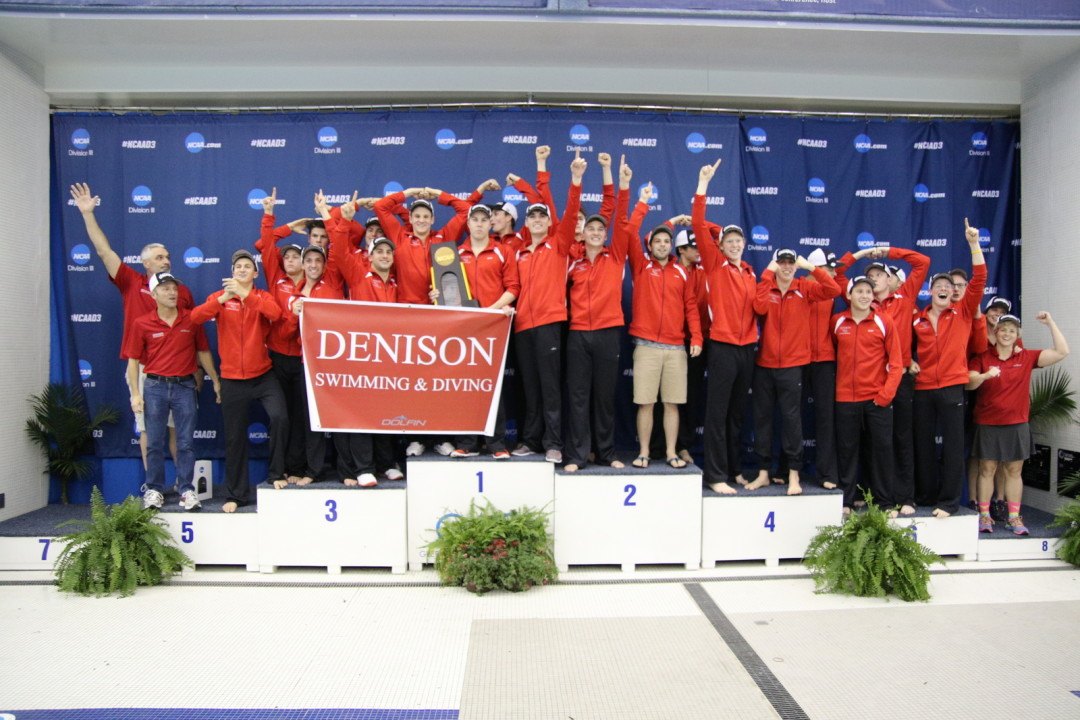 Denison is looking for a repeat, but the Big Red must get past Andrew Wilson and the rest of the Emory Eagles, as well as Kenyon, to get the job done. Archive photo via Allen Rich

The 2017 NCAA Division III Championships, hosted jointly by The City of Shenandoah and the Southern Collegiate Athletic Conference, will begin on Wednesday, March 15, at the CISD Natatorium in Shenandoah, Texas. We have already scored out the women’s psych sheet; we now turn our attention to the men’s.

236 swimmers from 52 teams have been selected to compete at the Division III men’s meet. Denison and Kenyon have 16 invited swimmers apiece; MIT, Johns Hopkins, and Emory follow with 14, 13, and 12, respectively. And while Emory may have fewer athletes, when one of them is Andrew Wilson, suddenly the Eagles look like contenders. Wilson took last year off to train for Olympic Trials. His presence on the roster at this year’s meet makes a world of difference for Emory: Wilson will likely win all three of his individual events and he’ll be a major factor on Emory’s medley relays. Christian Baker, Oliver Smith, and Thomas Gordon will also be key contributors for the Eagles.

Defending champions, Denison, has several new names on the roster this year, but senior Jackson Lindell, who won three individual events in 2016, will be expected to lead the Big Red’s efforts in the pool. Veterans Jason Wesseling and Stuart Hohm should bring in points again this year, as should a coterie of freshmen and sophomores, including Robert Wang, Kenny Fox, and Jacob Ball.

Last year’s NCAAs was an exciting matchup between the two NCAC rivals, Denison and Kenyon. The Lords were only 37 points out of first place last year, and they return some of their biggest stars, including Arthur Conover and Ian Reardon. Kenyon freshmen Michael Bartholomew and Connor Rumpit are expected to contribute, as is sophomore Jonathon Zimdars.

Johns Hopkins and MIT are also strong contenders. Hopkins seniors Evan Holder and Andrew Greenhalgh, as well as junior Mark Wilson, were all big point-winners in 2016 and are back this year. MIT, meanwhile, will be relying on freshmen Bouke Edskes, Tim Kralj, and Gabriel Schneider to lead their efforts.

While we cannot yet add estimated diving point to our totals, it’s worth mentioning that Denison scored 97 out of 310 possible points in diving last year, with three A finalists in each diving event. While they graduated 37 points, Denison could still break away from the rest of the field with their divers. SUNY Fredonia (42), SUNY Geneseo (36), and Tufts (24) also benefits from the boards last year.

Here is the psych sheet scored –without diving– for the 2017 NCAA Division III Men’s Championships:

Denison’s diving will probably be the deal-breaker here (again). But then again, unlike, Dension, Emory kind of only has one way to go since some many of its points come from first place seeds (5 individual firsts and three relay firsts = 240 points). In contrast, Denison is first in just one relay and one individual (60 points). Also, Kenyon has several seeds that are likely to move way up (medley relays, for example), so they might be in the mix too. For Emory to win this, their non-Wilson team members are gonna have to crush it. Gonna be a great meet to watch.