The women of Emory and the women of Kenyon lead all programs with 17 apiece invited to the NCAA Division III Championships based on psych sheets released Wednesday night. Stock photo via Tim Binning/TheSwimPictures.com 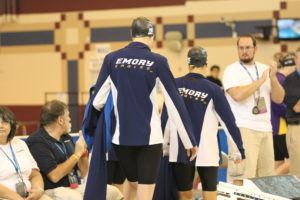 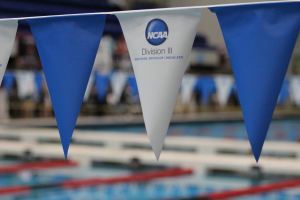 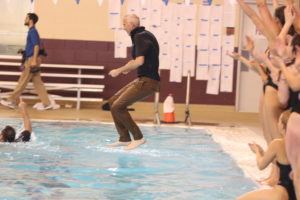 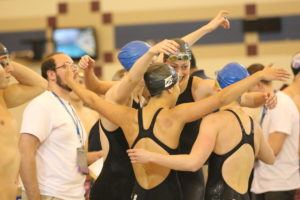 To finish off their utterly dominant NCAA D3 Championships performance this week, the Emory women won the 400 free relay in a new D3 record. 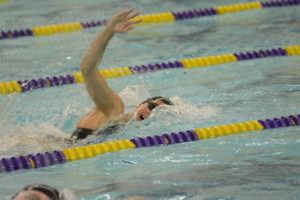 Williams junior Emma Waddell is the second seed in the women’s 100 free on Day Four of competition at the 2017 NCAA Division III Championships.

The women of Emory and the women of Kenyon lead all programs with 17 apiece invited to the NCAA Division III Championships based on psych sheets released Wednesday night.

There’s also a tie atop the men’s side, as Denison and Kenyon each have 16. Teams are only allowed 18 total, with diving selections yet to come.

All of the NCAA selection documents are below:

The women’s teams with the most invited athletes:

The men’s programs with the most invited athletes:

The NCAA’s selection process is as follows, as spelled out in Braden Keith‘s report from earlier this week:

All swimmers who have achieved NCAA Automatic “A” Qualifying Standards are entered in the meet first. Next, the top 16 qualifying relay teams (and 24 qualifying divers) are entered.

Then, entries will be added 1-per-event until the entry caps noted above (260 male and 267 female) are hit. On the “row” where the entry cap is breached, swimmers are ranked based on whose percentage is closest to the NCAA Division III Championship meet record and selected until the cap.

Unlike in Division I, Division III swimmers invited to swim on relays only can swim up to 3 events in which they have “B” time standards, regardless of whether they were selected individually in those events.

Each team is capped at 18 student athletes of each gender. Divers count only as 1/3 of a competitor.

Page 21 of the championship manual listed above spells out the selection procedure in its entirety.

What is the likelihood of an alternate making it into the meet?

Barb – it seems to happen every year. Top of the list is a good spot to be.

I am a coach for one of the swimmers on the alternate list. We got an email from the NCAA yesterday that we were second alternate and now we have moved down on this published alternate list.

Absurd that the men’s meet had to cut down to 15 relays and the individual line only completed line 14 individually before incompletely filling line 15.

I was a d3 swimmer so I know there are financial constraints, but I think a very easy and logical argument could be made that at least the top 16 must be invited.

It is unfortunate that the top 16 time in prelims is often slower than an invite time. There are so many swimmers who dream to compete at this meet only to be a few hundredths off the cut time.

The financial constraints are imposed by the NCAA. They don’t want to pay for those extra 20+ swimmers. My proposal, off the top of my head, is to select individual swimmers first through line 16 then start relay selection until you reach 16 and then invite more individual swimmers until you reach the maximum. This year we would have probably lost one line of the relays for the men and no change for the women.

Can anyone help me out and explain how the selection process works? I read how it goes but am still a little confused. Also what does the “Optional Entries Below This Line” mean? Were those swimmers the ones without the “A” cut and they were invited? And lastly how come theres swimmers with times WAY slower than the “B” cut on the psych sheets? Thanks in advance!