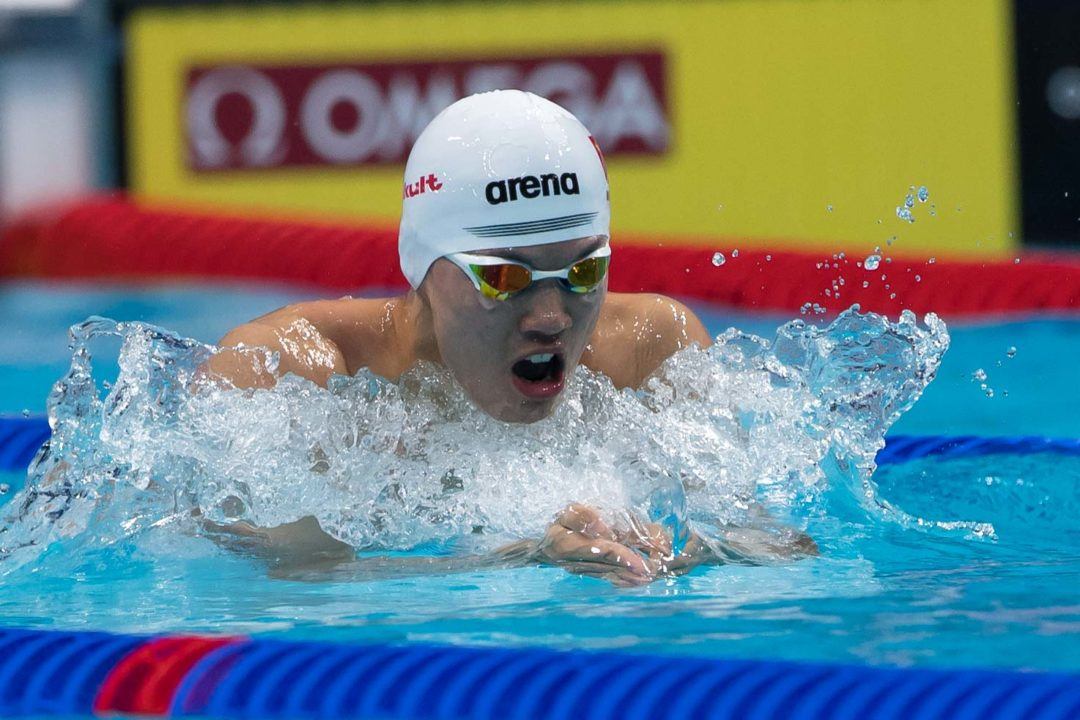 Wang Shun followed up his 400m IM victory in Tianjin with a 200m IM win on night 6, while Ning Zetao established himself as the top seed in the men's 50m freestyle heading into tomorrow night's final. Archive photo via Mike Lewis/Ola Vista Photography

Day 6 of the 13th Annual National Games of China brought more quick swims from some of the nation’s most notable competitors. The men’s 200m IM bronze medalist from the 2017 World Championships, Wang Shun, doubled up on his 400 IM victory to also take gold in the shorter IM here in Tianjin tonight.

The men’s 200m IM field held its cards close to its chest through prelims and semi’s, with no competitor cracking the 2-minute boundary. Come finals, however, Shun fired off a speedy 1:57.02 to top the podium over countryman and reigning world junior record holder Qin Haiyang. Hiayang finished in 1:57.71, less than a second off his 1:57.06 WJR produced for 6th place in Budapest.

Shi Jinglin won the women’s 200m breaststroke handily tonight, touching in 2:22.66 to beat the field by over 2 seconds. Jinglin earned bronze in this event in Budapest with a mark of 2:21.93, therefor, the 24-year-old continues to knock on the door of China’s national record mark of 2:21.37 set by Qi Hui at this same meet back in 2009.

Women also battled the 100m freestyle final this evening, with Zhu Menghui taking the top prize in a time of 53.40. Representing the only swimmer of the field to delve into sub-54 second territory, Menghui crushed the 53.85 she produced to finish 11th at the World Championships this past summer and inch closer to the national record of 53.13.

Finishing with silver tonight in the women’s 100m free was Wang Jingzhau, who clocked a final time of 54.53 to shave .05 off of her semi effort of 54.58 from last night. Li Zhesi, who competes for the Ohio State Buckeyes stateside, earned bronze in a time of 54.56.

Doubling up on his 100m backstroke victory here in Tianjin, World Champion Xu Jiayu churned out a winning time of 1:55.42 to stand atop the podium in the men’s 200m backstroke. His time tonight falls just .16 shy of the 1:55.26 he produced to claim 5th place in Budapest after taking gold in the 100m distance. Behind Jiayu tonight was Zhejiang teammate Li Guangyuan touching in 1:56.36 for silver.

Reigning World Junior Record holder in the men’s 200m butterfly, Li Zhuhao led the men’s 100m fly semi-final tonight, clocking 52.47 to represent 1 of 2 sub-55 second swimmers on the night. In prelims, Zhuhao touched in 53.54 to lead Zhang Zhibin‘s time of 53.35 from heat 3, with Zhibin still in the mix tonight with a mark of 53.14. But also hunting Zhuaho is 2nd seeded Zhou Jiawei who earned a time of 52.99.

After claiming gold in the men’s 100m freestyle last night in a time of 47.92, Ning Zetao was back in the pool contesting the splash n’ dash. Establishing himself as the top seed of the morning in a time of 22.00, Zetao crushed the only sub-22 second outing of the evening semi-final, finishing in a mark of 21.98. That’s within .05 of Zetao’s own personal best and national record of 21.91 set at the 2013 edition of these Games. The next-closest competitor in tonight’s semi-final was Zhao Xianjian who touched in 22.19. The final takes place during tomorrow night’s final session.

The circumstances around Ning have made it that I’ll never believe any performance regarding him. Good time for Shun

Timing systems have become more advanced to accurately record a swimmer’a time. Unless someone jumped in for Ning during the middle of the race, in which case it would have been a DQ, SwimSwam made those times up merely for readership, or Ning somehow tampered with the timing system to misrepresent his performance, the times mentioned above are in fact what he went in those events. And whatever times Ning will put up in the future that show up in the timing systems will in fact have been the time that he went in whatever race he will have swam.

The doubt is not about the timing systems…

Wang shun needs to take the next step and improve from his 4:09 400IM personal best. Maybe he needs to go train with Chase kalitz while spying on him ?.

All the names making waves here are established names except the 12 year old who may not be 12. Maybe a misunderstanding.. however I think before this meet she had a pb oh 59 secs in the 100 fly from April or so.

I think these posters are from the State Department . One didn’t know who Ning was .

Does anyone know if this meet is sanctioned by FINA? Do these time count towards fina world rankings?