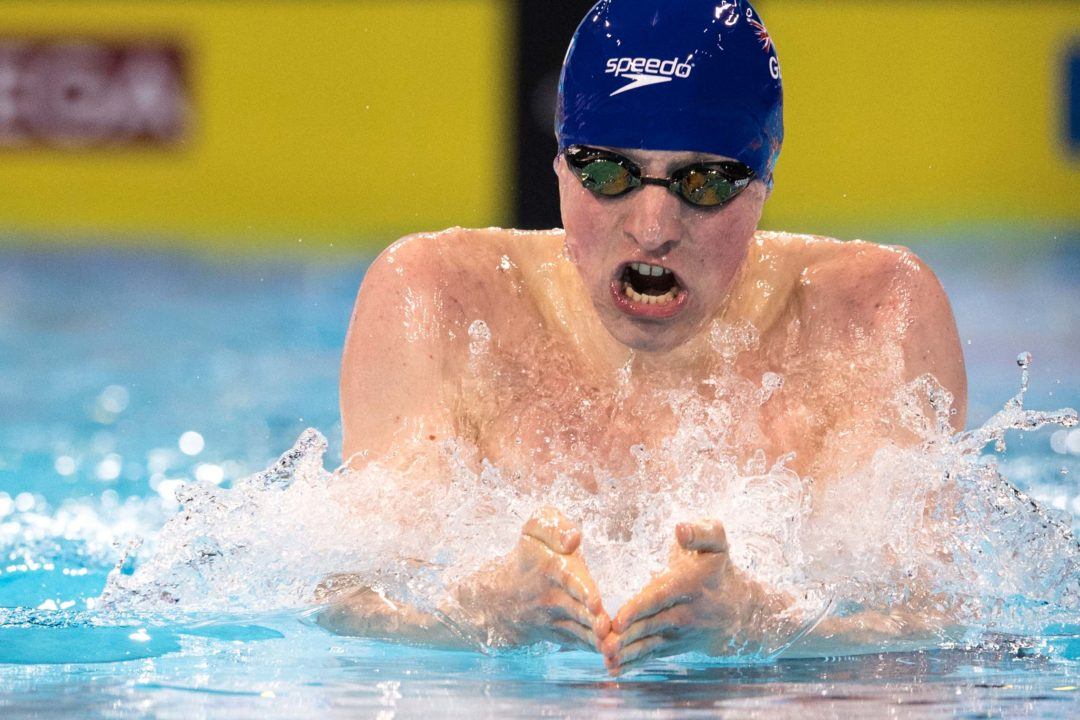 20-year-old Daniel Jervis was downright giddy after winning the men’s 1500m freestyle over two Olympians tonight in Sheffield. Taking the race out hard and not looking back, Jervis took down both Tim Shuttleworth and Stephen Milne, both of whom contested the 1500m heats in Rio.

Entering this meet, Jervis’ personal best was the 14:55.33 notched at the 2014 Commonwealth Games, a competition at which the Swansea Aquatics athlete earned bronze at just 18 years of age. After a quiet couple of years, however, Jervis wreaked havoc on that mark tonight, hitting a new low of 14:51.48 to finish well within the British consideration standard. This was the 2nd final Jervis made at these championships, having already finished in 7th place in the 400m freestyle on night 1 in 3:49.21. With his effort, Jervis now sits within the top 5 times of the world this season.

Earning her 2nd win of these championships, Loughborough’s Charlotte Atkinson led this women’s 200m butterfly wire-to-wire, even if the final 25m looked beyond painful for the athlete. Splitting 1:00.29 at the 100m mark, Atkinson closed in 1:06.77 to nail a final time of 2:07.06, well ahead of her personal best of 2:09.93 from this past February.

Atkinson’s 50m butterfly victory was the first British title brought home to the Isle of Man in nearly a half century, so now the 21-year-old has 2 titles collected, with the 100m butterfly yet to be contested. Atkinson now ranks 4th in the world this season with that effort and finished .92 ahead of the consideration standard, with her time progression making a case to include her on the Budapest roster.

If the race were 250m, then Swansea’s Alys Thomas most likely would have taken over a tightening-up Atkinson down the stretch. Instead, Thomas settled for silver in 2:07.87, marking the first time she’s ever ventured into sub-2:08 territory. She now ranks 7th worldwide with that career fastest performance and also finishes within the 2:07.98 consideration time.

Not to be overlooked is our bronze medal winner, Emily Large of Newcastle. The 15-year-old British national age record holder in this event holds a personal best of 2:08.87, but fell just off that tonight in 2:09.89, still an impressive swim at just 16. The women’s 400m IM victor, Hannah Miley touched in 2:12.06 for 5th.

22-year-old Max Litchfield simply lit it up in Sheffield tonight, throwing down a new British national record-setting swim of 4:10.63. The 2016 World Short Course silver medalist already held his nation’s fastest mark ever in the SCM version of this event and has publicly set his 400m IM goal at a sub-4:10 mark, not shying away from trying to become a major player in this grueling race.

Hitting right above that target tonight in 4:10.53, Litchfield destroyed his 4:11.62 4th place finishing swim from Rio while notching an automatic qualifying time for Budapest. The previous national record was held by last year’s bronze medalist at this meet and 2016 Olympian Dan Wallace at 4:11.04. Wallace opted not to swim the event this time around.

Litchfield now ranks as the 4th fastest swimmer in the world.

Crushing his 4th seeded 4:21.12 time from prelims was University of Florida Gator Mark Szaranek, who has now proven he’s got the stuff to kill this race both yards and meters. At this year’s NCAA Championships, the Gator junior tied Will Licon for the 200m IM NCAA national title, while earning a 3rd place finish in the 400m IM. Tonight in Sheffield, Szaranek hacked almost 2 seconds off of his personal best to collect the silver medal.

Younger Joe Litchfield made the podium a family affair, finishing in 4:19.18 for bronze tonight.

Ealing’s Anna Hopkin was able to upgrade her silver medal from last year to gold, as she cruised to a 50m freestyle victory in 25.07.  That shaves .10 off of her previous personal best of 25.17 from the BUCS Long Course Championships in February and smoked the 25.39 she produced last year.

Siobhan-Marie O’Connor finished 2nd tonight in 25.28 with Lucy Hope taking bronze in 25.42. 16-year-old Freya Anderson took 4th in 25.44, having only made the final after a Jessica Jackson scratch. She took the giant opportunity to clock a new personal best by .15.

However, the full effect of 2016 Olympic 4th place finisher Fran Halsall‘s retirement is continuing to be realized, as no woman notched a sub-25 second mark in this morning’s prelims or finals. Last year Halsall was the only sub-25 swimmer in even the final, taking domestic gold in a mark of 24.48.

The men’s 100m freestyle capped off a huge night of racing for the British, one that saw 2 national records fall in the span of 2 hours. After Max Litchfield‘s inspiring performance in the 400m IM, 19-year-old Duncan Scott from the University of Stirling proved once again he is indeed the real sprinting deal by becoming the first British man ever under the 48-second mark in the 100m free.

Entering the meet with the national record of 48.01 from his 5th place finish in Rio, Scott put the field on notice this morning with a super quick 48.58, the only sub-49 second out behind Adam Barrett.  But Scott fired off the big guns this evening, opening in 23.14 and closing in 24.76 to collect a national title and clear the automatic consideration time. Scott also now ranks as #1 in the world, ahead of Aussie maverick Cameron McEvoy.

Barrett bowed out of the 100m freestyle final, presumably to focus on his prime event the 100m butterfly, so that left the Edinburgh duo of Jack Thorpe and Kieran McGuckin in a good spot to take the minor medals. Thorpe finished in 49.65 for silver, with McGuckin just .03 behind for bronze.

Could tell after the 400 on the first night that he was on good form. His splits were so consistent throughout that 1500 just now too.

Charlotte Atkinson where did that come from? 3s PB! John Rudd always rated her at Plymouth… Coming to fruition?

Well if I was trying to think of events with 2 under the consideration time, the 200 fly definitely wouldn’t have been one!

Agreed! Loved how Atkinson said post-race, “Jocelyn proved anything is possible!” What a way to get the fire going in Sheffield!