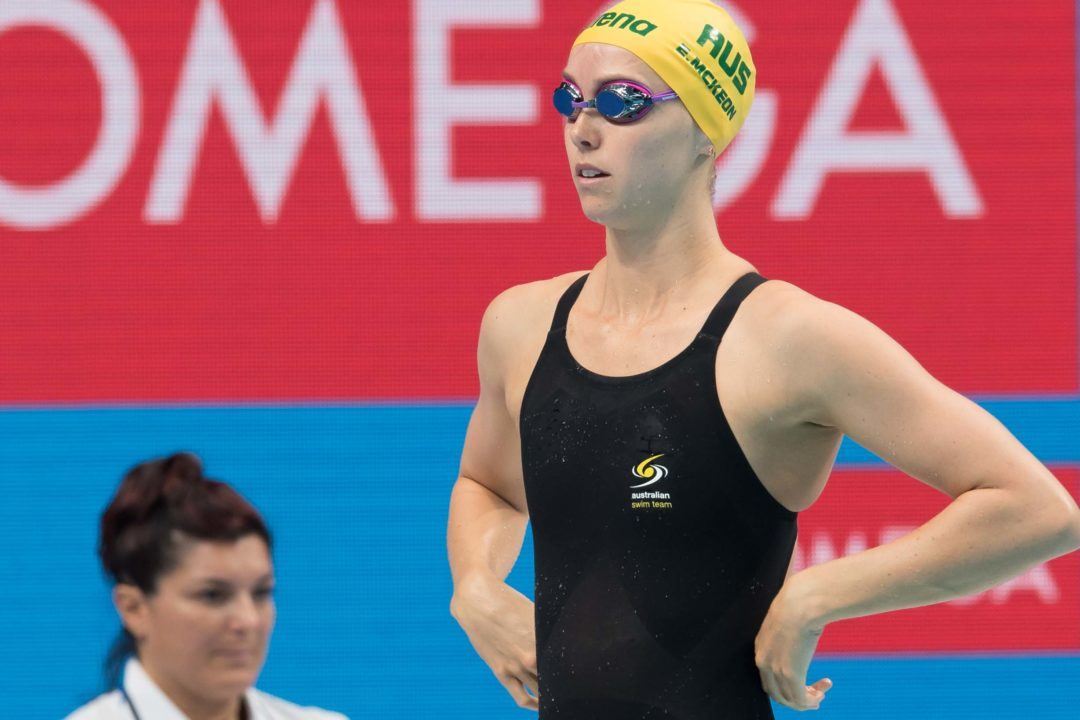 After Miguel Duran (above) and Albert Escrits Manosa took gold and bronze respectively in the 400 free, they shared gold this morning in the 800 free.

The 2017 Australian Short Course Championships wrapped up today, as the 3-day meet finished with more action in Adelaide. Already this morning we reported on young Minna Atherton‘s All Comers Record during the timed final of the women’s 50m backstroke, but several other timed finals were determined in prelims session as well.

Reigning 50m short course breaststroke national champion Georgia Bohl successfully defended her title, although by herself this time. Last year’s edition of the meet saw Bohl and Jessican Hansen tie in 30.93 to stand atop the podium together, but this morning Bohl touched all alone in 30.57 to take gold.

Visiting Lithuanian swimmer Ruta Meilutyte claimed her 2nd silver of the meet, taking the runner-up slot behind Bohl in 30.81. Hansen settled for bronze this year, clocking 30.86 for her efforts.

The men’s 1500m timed final saw a great battle between Aussie Joshua Parrish and visiting American Jordan Wilimovsky. The pair played cat and mouse throughout the entire 1500m, but it was 20-year-old Parrish who ultimately touched the wall first in 14:45.29, beating his title-winning time of 14:45.49 from last year by just two tenths.

Wilimovsy finished just .38 behind in 14:45.67 for silver, while Rio Olympian Jack McLoughlin rounded out the top 3 with his bronze medal-garnering effort of 14:53.18. Olympic champion in the 400m frestyle, Mack Horton, finished off the podium in 14:58.26. He is reportedly under heavy training with Italian training partner Gregorio Paltrinieri.

Of his race, Parrish commented, “It was good to get in and mix it with the big boys and come away with that win. I know I have to get under 15 minutes for long course and my best is 15:13 at the moment but that’s the aim. It would be everything to make the Commonwealth Games team – you put your heart and soul into it so that would be sensational.”

Of note, Olympic open water swimmer Jarrod Poort wasn’t in the race, as the athlete is currently serving a ban for having missed 3 out-of-competition doping tests.

Olympian David Morgan pulled off a double tonight, first taking the men’s 100m fly, then the 50m freestyle just minutes later. In the former event, the fly specialist stopped the clock at a mark of 50.55 to claim the only time of the field under the 51-second barrier. Also in the race was 100m freestyle champion Kyle Chalmers, who finished 6th in a time of 52.66.

Morgan then fired off a time of 21.46 in the men’s splash n’ dash, which proved fast enough to hold off Marion athlete Andrew Abood. Abood, who finished with the silver behind Chalmers in the 100m free event, touched in 21.67 to collected the only other sub-22 second result of the final. Chalmers wound up 9th overall after prelims in 22.49.

Chalmers and Abood both ended their meet with gold in the Marion men’s 4x100m medley relay. Joined by Mahoney and breaststroker Joshua Palmer, the foursome finished atop the podium in 3:33.19, including a 52.93 fly split from Chalmers.

Olympic medalist Emma McKeon added to her hardware haul on the meet, winning the women’s 200m butterfly in a time of 2:04.35, a new personal best. In fact, her outing tonight checks-in as the 7th fastest time ever by an Australian. McKeon says she may consider adding the event to her Commonwealth Games meet program, but will decide as the competition draws closer.

Behind McKeon was Olympic finalist in the 200m fly event, Brianna Throssell of West Australia, clocking a time of 2:06.52.

Finally, Japanese swimmer Daiya Seto highlighted the void of Australian men’s breaststroking, by easily taking the 200m distance tonight in a time of 2:04.57. He had earlier won the men’s 100m IM in the timed final of the morning, stopping the clock in 52.81 to win by well over a second.

‘Whilst Jasmine Greenwood took the gold in the woman’s SB 100 breastroke’. She has only just turned 13 for goodness sake and has been Swimming National Age Group Qualifying Times in breastroke of all things for a neuro. This is yet another example of Adam Pine / Jan Cameron abusing the system and the IPC turning the other cheek. Why, just why would you want your child to engage in ‘disability’ in any form when they clearly are not is completely beyond my comprehension. Jasmine Greenwood has had a long enough period involved in Para Sport now to realise that she isn’t actually ‘disabled”. She has only just turned 13. Someone ought to reach out and help her. This is… Read more »

Could not agree more with LMA’s comments, glad someone has finally spoken up. If able to achieve National Age Group Qualifying Times with a neuro condidion then there is cleary very little to no impact on swimming ability and should not meet the minimum criteria for classification in para sport. It belongs to those with a true disablity which Jasmine cleary does not have. A 13yr old neuro does not win National Championships, something is not adding up! Jasmine needs to take a good look around her and realise that she does not belong in para swimming, hopefully it will catch up with her very soon. It’s a very sad situation for a such a young girl.

Winning at a national multiclass level?… 1. It’s National Short Course Champs, with poor Para attendance, especially when held in Adelaide during end of year school/Uni exam time. 2. The event leads nowhere. No selection for teams, tours or chance of extra funding for higher world rankings. For most swimmers and entourage, it’s a lot of money to spend (airfares, accom) to attend for nothing. 3. Due to a lack of nominations there was no heats for this event, all 8 entrants progressed directly to the final. 4. No Madeleine Scott, no TTK, no Paige Leonhardt, all of whom placed ahead of Greenwood in 100m breaststroke at Open Nationals (LC) in April. 5. No country seems to take Para short… Read more »

Seto’s breaststroke is insane. Can only imagine what he can do in breast with a proper taper