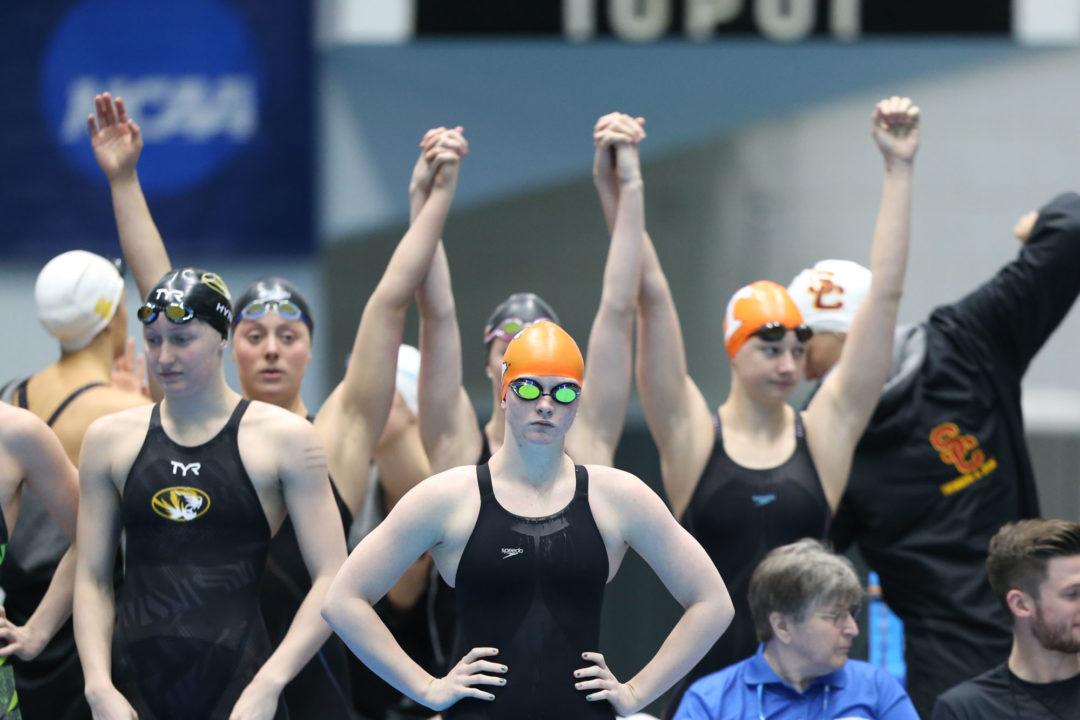 Who volunteered to make the biggest leap in our first Power Rankings after mid-season invites? Hint: they've got 4 sophomores in major NCAA scoring range, including the fastest 100 flyer in the nation. Archive photo via Tim Binning/TheSwimPictures.com

Winter invites have wrapped, and it’s time to count down our top 20 women’s swimming & diving teams in the NCAA, with an eye on the ultimate NCAA finish order.

This rank has a lot to do with star breaststroker Natalie Pierce, but even more to do with FSU’s medley relays, which both sit in NCAA scoring range. -JA

These Tar Heels can sprint! Caroline Baldwin is four one-hundredths of a second out of leading the nation in the 50 free (21.48) and the depth is good enough to rank 6th nationwide in the 200 free relay and 11th in the 400. -JA

Tip your hat off to Beata Nelson, who after stumbling freshman year, has become a potential triple A-finalist at NCAAs. Her 50.79 in the 100 back was the highlight of her meet, and ranks her 2nd in the country behind only Kathleen Baker. -KO

Cierra Runge is officially done in Madison, and that’s a big hit. Still, its softened by home-state product Beata Nelson coming into her own, particularly in the backstrokes, where she was 50.7/1:51.2 at the Texas Invite. -JA

Freshman Mackenzie Padington is already breaking school records (1:44.1 in the 200 free). Breaststroker Lindsey Kozelsky didn’t look her best, but she also dropped about two seconds each in her 100 and 200 breaststrokes between mid-season invites and NCAAs last year, so there’s not too much reason for concern. -JA

Mackenzie Padington pulls it all together. Lindsey Kozelsky may not have been rested for the Minnesota Invite, but the medleys could be in trouble if she’s having an off season. -KO

Todd Desorbo has these Cavaliers headed in the right direction. Caitlin Cooper threw down lifetime-bests in the 50 and 100 frees (21.8/48.2) at the Georgia Invite and the 200 and 400 free relays rank 3rd nationwide. Hmm, an ACC team rocketing to national significance on the backs of relays and sprint types… sounds like something another coaching staff has done in recent memory. If only we could remember who. -JA

Good things are happening under Todd DeSorbo and his sprinters– their 400 free relay is 3rd in the NCAA right now. Megan Moroney is back, and while she was well off her bests, she’s a potential scorer should she get back to where she was in 2016. -KO

Key players are still missing, and the sprint group is looking thin without those swimmers. -KO

Where’s Courtney Caldwell? Ky-Lee Perry is lonely in a once-deep sprint crew. Still, the relays are in decent shape even without Caldwell, and Hannah Moore is currently ruling the mile within the ACC. -JA

Annie Ochitwa threw down a 47.5 at the Mizzou Invite. Sharli Brady looked strong, too, and Hannah Stevens is a big reason why Mizzou is knocking on the door of the top 10. -KO

How about Sharli Brady going lifetime-bests in the 200 IM, 400 IM and 200 fly at Mizzou’s home invite? The Tigers have an outside shot to score all five relays at NCAAs, which would be a huge points boost. -JA

Backstroke U has been complemented nicely by freshman breaststroker Bailey Bonnett, who has been shaving off time like crazy and doesn’t seem done yet. -KO

Asia Seidt‘s 200 IM at the Ohio State Invite (1:53.84) might’ve been the swim of invite season. She cut 1.2 seconds and went from a borderline A finalist to potentially competing for a top-3 finish, at least based on last year’s NCAA times. -JA

Erika Brown is absolutely on fire, leading the country in the 100 fly (50.33) and also throwing down a 21.50 last weekend in the 50. Stanzi Moseley looks more at home after transferring from USC, and the team should have some great relays this spring. -KO

Erika Brown is a machine. She’s got top-5 NCAA ranks in the 100 fly (1st), 50 free (3rd), 100 free (5th) and could carry the Volunteer relays come March. The Vols were the true breakout team of invite season, surging up 9 spots in our ranks for the biggest gain of any program. -JA

The Hoosiers are the only team in the nation under 1:35 in the 200 medley relay after nearly breaking the NCAA record at the Purdue Invite. The team is performing well as a whole– it’s not JUST the King show. Freshman Grace Haskett is quickly developing into the sprinter that IU has desperately needed. -KO

Breaststroke isn’t an issue and Louise Hansson is killing it in her multitude of events, but the freestyle group has been quiet and the team feels… small. -KO

Most of USC’s studs had gone so fast already this fall, there wasn’t much room for improvement at the Texas Invite. Still, breaststroker/IMer Riley Scott had three great races and freshman Marta Ciesla continued a nice rookie season. -JA

I’m high on Texas. Their free relays in particular are going to score a lot of points, and they’ve got the firepower in fly and back to not be too one-dimensional. -JA

Quinn Carrozza really performed at the Texas Invite, and the sprints looked strong. Medley relays still need to come around, though. -KO

Louisville’s got young free relays with some of the highest ceilings in the nation. Did you know that none of the Cardinals’ five relays ranks lower than 7th in the NCAA, and that there’s not a single senior among all 20 of those legs? -JA

Arina Openysheva is coming around, and Grace Oglesby hammered down bests in the 100 and 200 fly at Winter Nationals. Comerford is doing Comerford things and looks great. -KO

Sprint depth and relays will hurt Georgia come NCAAs, but the Bulldogs are fast almost everywhere else. Courtney Harnish‘s freestyle has never looked better, even if her fly and back were off at the Georgia Invite. -JA

Though UGA had some big swims at their own invite (like Courtney Harnish‘s 4:35 in the 500 free), Michigan was stronger in sprints, which makes all the difference come March. -KO

Getting G Ryan back healthy is a big boost to a roster that was already flying high. Siobhan Haughey looks like a world-beater and that 6:55 800 free relay will be a tough opponent for anyone. -JA

Though it was without Simone Manuel in the mix, the Aggies actually outperformed Stanford at the Art Adamson Invite. With about half of the top 10 carrying a big breaststroke problem, A&M looks poised to capitalize: they’ve currently got 5 swimmers in scoring range in the 200 and 3 in the 100, including #1 Sydney Pickrem and #2 Bethany Galat in the 200. -JA

The best 200 and 400 free relays in the NCAA by half a second apiece. Medleys ranked within a second of the national lead. Sarah Darcel is already putting it together in yards. It’s a good time to be a Golden Bear. -JA

Simone Manuel‘s absence gets more concerning with every passing meet. The Cardinal are still fine behind Katie Ledecky and Ella Eastin, but the relay hit from Manuel’s absence is clearly evident. -JA

Told you the Lady Vols are coming on very quickly. Look for them to finish in the top 8 at NCAAs!

IMO, Erika Brown had the breakout performance of December 2017. As a freshman, she was a relay-only qualifier for NCAAs. 9 months later, she is a serious title contender in the fly, and potential A finalist in the other sprints.

Ya gonna have to come through College Station, Texas first! Good luck in driving down that road! Ask Stanford about the “pot holes” they encountered on the way out of town! Not many pot holes comin down but plenty driving back home?