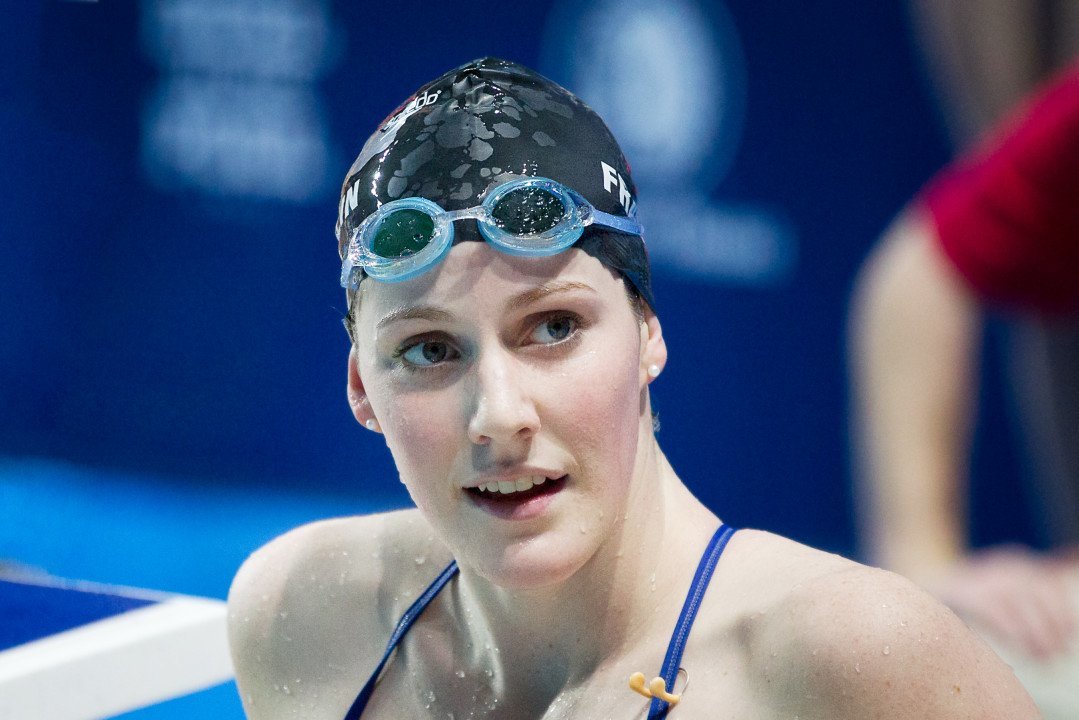 Cal's Missy Franklin beat out Simone Manuel of Stanford in the marquee matchup of the meet so far. Archive photo via Tim Binning/TheSwimPictures.com

Night 3 of the Pac-12 Women’s Championships will no doubt be highlighted by the huge 200 free matchup between Missy Franklin of Cal and Simone Manuel of Stanford. Two of the best freestylers in the nation right now, Franklin and Manuel will meet for potentially their only time head-to-head at the Pac-12 Championships, depending on Franklin’s event selection tomorrow.

Cal has been on fire lately, and we’ll get to see breakout sprint star Farida Osman chase her second title in the 100 fly. Kelly Naze (400 IM) and Rachel Bootsma (100 back) also hold top seeds.

Meanwhile Stanford sits atop the 100 breast (Sarah Haase) as they try to reel in the Golden Bears.

Keep refreshing this page for event-by-event updates, and check out @SwimSwamLive on Twitter for more up-to-the-second news and highlights.

A night where Cal is set up to score monster points started as well as it possibly could, with sophomore Celina Li leading a 1-2 finish in the 400 IM.

Li went 4:06.09 to pick up the win, really tearing away from the field on her 1:10 breaststroke split. That’s not quite a season-best for Li, but was plenty enough to win the title.

Stanford’s Tara Halsted led the second wave of finishers in, going 4:12.75, with USC’s Margaret D’Innocenzo just behind in 4:13.95.

Outside of Li and Naze, Cal also had Alicia Grima in the A final, and the junior went 4:14.86 for fifth, just ahead of UCA’s Arlyn Upshaw (4:16.12). That wasn’t a great showing for Upshaw compared to prelims, but it does kick off a night where UCLA should be in line to score some points. They’ll hope to pass up Arizona for fourth – the Wildcats took 7th in the A final iwth Shannyn Hultin (4:18.33) and won the B final with Jenna Bauer (4:16.66).

USC’s Kendyl Stewart, one of the breakout swimmers from last summer in the U.S., passed up top-seeded Farida Osman of Cal to win the 100 fly. Stewart threw down a big front-half of 23.87 to build a lead, then held off Osman at the wall to win 51.10 to 51.14.

Those are season-bests for both women, and move them to numbers 4 and 5 in the NCAA rankings. Currently Louisville’s Kelsi Worrell looks like the swimmer to beat, but Stewart and Osman can no doubt push into the 50-points in a race where perhaps more than half the A final could break 51.

Cal’s Rachel Bootsma, swimming the first half of a 100 fly/100 back double tonight, took third in 51.79, with her teammate and breakout Canadian freshman Noemie Thomas fourth.

Stanford’s Janet Hu broke up a run of Cal swimmers, taking 5th in 51.93, and just behind her was another Golden Bear, freshman Jasmine Mau, in 52.40.

Stanford’s Lindsey Engel, yet another freshman, went 52.57 for 7th. 4 of the 8 swimmers in this A final were first-year NCAA swimmers.

The race of the night was an absolute slugfest between quite possibly the two best swimmers in the NCAA right now.

Ironically, it was the more mid-distance-oriented Franklin who went out fastest, flipping at 49.72 to Manuel’s 50.19 at the 100-wall. But Manuel started to show off her blazing top speed in the back half, reeling in Franklin over the final two splits and bringing things right down to the touch.

It was Franklin who pulled out the win 1:41.09 to 1:41.15. Those are season-bests for both women, and notably for Franklin, it’s a good 1.2 seconds faster than she went at Pac-12s last year. Franklin, of course, went on to break the American record at NCAAs with a 1:40.31, and is suddenly looking like a very real threat to throw down the world’s first sub-1:40 swim in the event.

USC’s Chelsea Chenault continued her strong run at Pac-12s, taking third in 1:43.17. Just behind her was breakout Cal freshman Cierra Runge, who threw down a 1:43.31 for fourth. That’s the second-best swim of Runge’s career, behind only her 1:42.73 leadoff leg from that monster 800 free relay on day 1.

Cal’s Camille Cheng barely touched out fellow senior and teammate Caroline Piehl 1:45.03 to 1:45.04 for 7th. Those two are in a tight competition for the final slot on that 800 free relay at NCAAs, but Cheng would now appear to have the advantage after splitting better than Piehl on Wednesday, qualifying better in prelims and then beating Piehl head to head in the final.

Stanford finally broke through for its first swimming win of the 2015 Pac-12s, getting a 58.60 from junior Sarah Haase to take the 100 breast title.

That’s Haase’s first time under 59 seconds in the event. It seems like the Stanford breaststrokers, a deep group, tend to have a swimmer get hot and take the lead for a time – last year it was Katie Olsen who really sizzled towards the end of the year, and this year it’s Haase.

UCLA also got a big boost from a junior as Allison Wine took second in 59.75. That caps off a big season for Wine, who was the Califonia Junior College Women’s Athlete of the Year in 2014.

Stanford freshman Heidi Poppe broke a minute in prelims, but couldn’t quite dip back under in the final, going 1:00.15 for third. Arizona’s Emma Schoettmer was 1:00.40 for fourth, just eking out that spot over USC Trojan Andrea Kropp (1:00.55) and Stanford senior Katie Olsen (1:00.61).

Meanwhile in the B, Cal’s Marina Garcia pulled out a 1:00.88 to earn 9th place. Garcia, a long course star for Spain, has been a bit of an enigma in her two seasons with Cal, never quite transferring her speed to the smaller college pool.But this was a lifetime-best for Garcia, and should suggest she’s got the potential to perhaps sneak under a minute on a relay split – the breaststroke is still Cal’s biggest Achilles Heel on the medleys.

An NCAA champ as a freshman, Cal’s Rachel Bootsma looks to be bouncing back from a rocky sophomore season as she won the Pac-12 100 back title. Bootsma went 50.84, improving her second-ranked time in the nation and blowing out the field by nearly a full second.

The former Olympian will have to overcome Virginia’s Courtney Bartholomew, who is on fire at the moment, for the NCAA title, but at the very least, she’s looking much-improved from the swimmer who didn’t even make the NCAA’s A final in the event last year.

Stanford freshman Ally Howe came up with second place, touching out Cal’s Melanie Klaren 51.72 to 51.90. In a big event for freshmen, USC’s Hannah Weiss came next, going 52.39 for fourth.

UCLA continues to make a points charge, with Linnea Mack going 52.68 for fifth, and her teammate Madison White was seventh in 53.03.

Between them was another freshman, Cal’s Jasmine Mau, who took sixth in 52.96.

Rounding out the A final was Arizona State’s Ingibjorg Jonsdottir, who went 53.26. USC’s Kendyl Stewart, coming off her big win in the 100 fly, won the B final with a 53.67.

In the women’s 1-meter diving, Arizona’s Samantha Pickens picked up the win at her last PAC-12 conference meet. Pickens scored 351.55 points to earn first place. The senior topped Stanford’s Kassidy Cook by 4 points. (Cook was 347.55). Cook, along with teammates Alex Clay and Kelly Markie, helped close the gap in the overall rankings, as Stanford currently sits behind Cal.

With one event remaining on the night, Cal now leads by about 55 over Stanford, not an awful margin for the Cardinal. USC and Arizona are still in a tight battle for third, though, with the Trojans leading 351 to 346.

Stanford made it two in a row and three of the last four to end the night, taking the 400 medley relay in 3:29.56. That’s just a tenth off their mid-season rest time, which currently ranks second in the nation.

The Cardinal were led by an otherworldly split from Simone Manuel on the anchor leg. Manuel went 46.15 – while she was a mind-blowing 45 earlier in the year, this is still an outstanding split.

Also on the squad were two other freshmen: Ally Howe (52.32 on backstroke) and Janet Hu (52.18 on fly). Holding it all together was junior breaststroker Sarah Haase, who went 58.91 after winning the individual breaststroke race earlier in the night.

Cal bettered their mid-season time, but will still rank #3 in the NCAA after going 3:30.21. They were faster than Stanford on both back (Rachel Bootsma‘s 51.32) and fly (Farida Osman‘s 51.28), but lost a lot of ground on breaststroke, where Marina Garcia was 1:00.65. And even with Missy Franklin anchoring in 46.96, the Bears weren’t able to overcome Stanford.

I’m extremely impressed by Franklin/Manuel and would love to see a vid of the 200 if anyone has one. Even by their standards this was amazing and it’s not impossible that they could both push each other under 1:40 in March!

the best line -up we could witness in this summer or next year . Love that line up . Monster line up