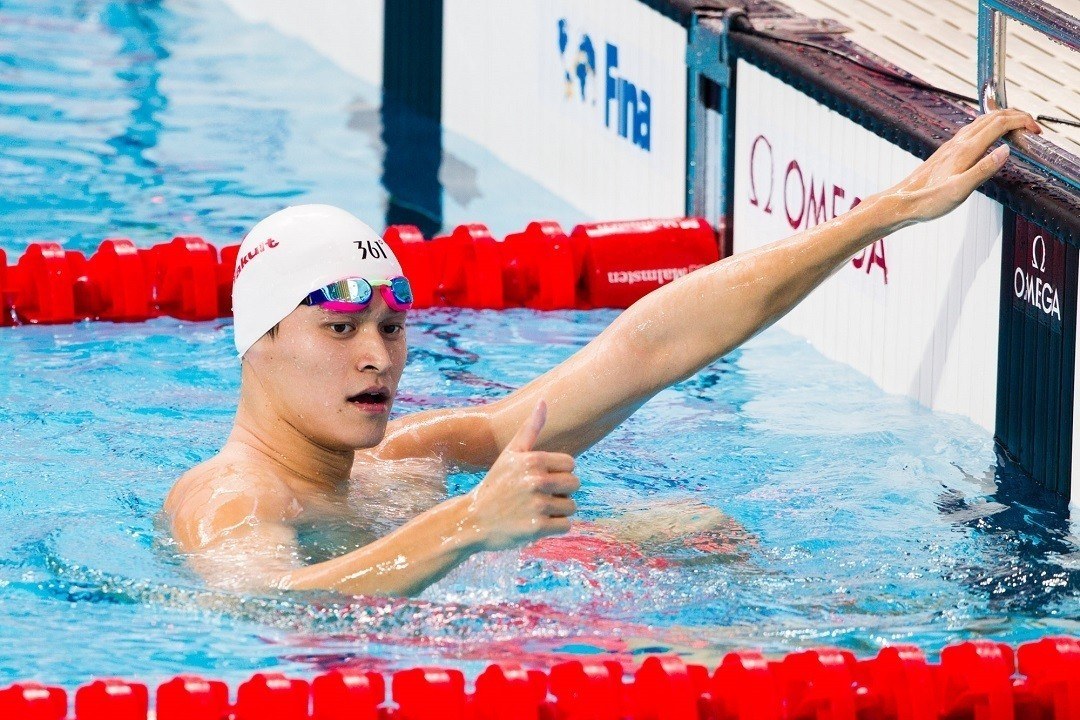 Sun Yang will look to win his second straight title and third straight medal in the men's 400 freestyle Current photo via Tim Binning/TheSwimPictures.com 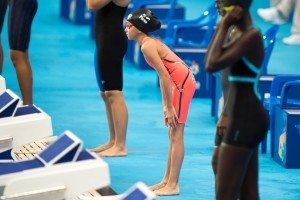 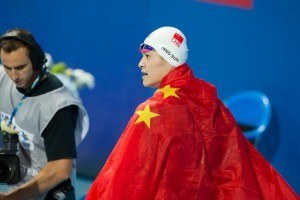 The first session of the world championships has been completed and we await the start of the first finals session. The preliminaries featured some very fast performances along with some surprising ones; setting us up for a terrific first night at the pool.

Not surprisingly Sweden’s Sarah Sjostrom paced the field this morning swimming a 56.47, 1.32 seconds ahead of her next competitor. Sjostrom will be a lock to qualify for the final and will look to push Dana Vollmer‘s world record of 55.98 and her own championship record from 2009 of 56.06. In the first semi-final we will see 2014 European champion Jeanette Ottesen (lane 4) battle with 2012 Olympic silver medallist Lu Ying of China (lane 5). They both qualified comfortably this morning in 2nd and 4th respectively. In the second semi-final we will Sjostrom in 4 along with Inge Dekker (NED) in lane 5, Katerine Savard (CAN) in lane 3, and American Kendyl Stewart in lane 6. The 8th fastest time this morning was a 58.12 by Australian Emma McKeon, so we can expect somewhere around a 58 flat to be required to make the final. Rachael Kelly of Great Britain earned her spot in the semi-final after defeating Farida Osman of Egypt in a swim-off for 16th place. Lili

The first medals for swimming at these championships will be handed out to the medallists of the men’s 400 free, and it is going to be a very exciting final. 1st place through 8th place was only separated by 2.20 this morning setting up a very fun race tonight. Sun Yang of China led the way with a time of 3:44.99, placing him in lane 4 for the final. He’ll be flanked by long time rival Ryan Cochrane of Canada (3:45.86) in lane 3, and rising star James Guy of Great Britain (3:45.37) in lane 5. A few surprises from the heats included Poland’s Wojciech Jacek Wodjak qualifying for the final in 5th (3:46.67) and Australian stars Mack Horton (#1 ranked in the world) and David McKeon both missing the final. Americans Connor Jaeger and Michael McBroom will have lane 6 and 7. Sun will be looking for his 3rd consecutive medal in this event and to defend his 2013 title, Jaeger will hope to win a second straight medal and Cochrane of Canada will look to rectify his 4th place finish from two years ago.

Hungary’s Katinka Hosszu had her first of many swims at these championships this morning, swimming a new personal best and European record in the 200 IM of 2:07.30. Over 1.5 seconds ahead of 2nd placer and 3 ahead of 3rd, Hosszu will be tough to beat. She could easily cruise this semi-final and qualify, but I expect we’ll see her push for a new personal best. Siobhan Marie O’Connor of Great Britain finished 2nd in 2:08.82 and Kanako Watanabe was 3rd in 2:10.37. In the first semi-final we will see O’Connor in lane 4 along with Canadian Sydney Pickrem in lane 5 who broke her Canadian national record this morning in 2:10.94. Along with them we’ll see American Melanie Margalis in lane 3 and young breastroke talent Viktoria Zeynep Gunes in lane 7. The second semi-final will feature Hosszu in lane 4, along with some other big names in Ye Shiwen (lane 3), Kanako Watanabe (lane 5), and Hannah Miley (lane 6). The 8th fastest time this morning was 2:12.27 so we can expect the cut off for finals to be around the 2:12 flat mark.

Florent Manaudou of France asserted his dominance in his first swim of the meet leading the pack going 23.15. The preliminary heats were very fast this morning, with 23.67 being required to qualify for the semi-finals. This kind of speed may of caught two-time defending champion Cesar Cielo off guard, as he barely qualified finishing 14th in 23.66. Tonight the first semi-final will feature some heavy hitters, with Cielo in lane 1, Andrii Govorov of Ukraine in lane 2, Cielo’s teammate from Brazil Nicholas Santos in lane 3, and short course world champion Chad Le Clos in lane 6. Laszlo Cseh and Konrad Czerniak will have lane’s 4 and 5. The second semi-final features Manaudou in 4, along with Joseph Schooling in lane 3 and world record holder Rafael Munoz in lane 5. It is going to be a very tight couple of heats tonight and we have to expect some big names will miss the final. Based off of the heats, expect around a 23.4 being what it takes to qualify for the final.

To no one’s surprise American Katie Ledecky paced the preliminaries of the women’s 400 free this morning going 4:01.73, almost three seconds clear of her closest competitor. Ledecky will have lane 4 in the final and will look to win her second straight title and challenge her own world record of 3:58.37. Australian Jessica Ashwood looked strong this morning qualifying 2nd in 4:04.47 and will have lane 5 beside Ledecky tonight. Lauren Boyle (NZL) and Jaz Carlin (GBR) will also be in the hunt tonight in lanes 6 and 7. Sharon van Rouwendaal (NED) qualified 3rd this morning and will join Aswhood, Boyle and Carlin in the battle for the minor medals as I don’t think we can expect anyone to challenge Ledecky for the title.

Adam Peaty and Cameron van der Burgh asserted themselves this morning posting the top two times by a wide margin. Peaty went 58.52 in a new championship record, and van der Burgh was 58.59. Both will have lane 4 in their respective semi-finals tonight and should have no problem advancing to the final. The majority of the major players advanced to the final, with a few exceptions. Christian Sprenger, Daniel Gyurta and Damir Dugonjic were the three who failed to qualify who surprised me the most. Sprenger came in with the 3rd seed but clearly hasn’t fully recovered from his past injuries and isn’t on form. In semi-final 1 van der Burgh will be joined by Japanese star Koseki Yasuhiro in lane 2 and Peaty’s teammate Ross Murdoch in lane 5. In the second semi Peaty will be joined by Pan American champion Felipe Franca Silva in lane 3 and Dmitriy Balandin of Kazakhstan in lane 5.

After some confusion with the scoreboards, the Americans prevailed this morning posting the top time of 3:35.52. They were followed closely by Australia (3:35.86) and the Netherlands (3:35.91). The most impressive splits from this morning were Sarah Sjostrom with a 52.75 for Sweden and Femke Heemskerk with 53.00 for the Dutch. The Americans will look to sub-in Missy Franklin and Simone Manuel for tonight, keeping Margo Geer and Lia Neal from this morning. The Australians will sub-in Cate Campbell, Bronte Campbell, and Emma McKeon, along with Emily Seebohm from this morning. The other qualifying countries 4th through 8th were Sweden, Canada, China, Italy and France. Expect this to be a 4-team race for the medals with USA, the Netherlands and Australia looking the fastest and Sweden has an outside chance with someone like Sjostrom on their side.

The Russian men swam well this morning as the coaches appeared to send out their top men for the prelims just to get a taste of the action. Andrey Grechin, Danilla Izotov, Vladimir Morozov and Alexander Sukhorukov combined to lead the pack with a time of 3:12.46. Brazil finished in 2nd, well back in 3:13.99, and will likely be subbing in Cesar Cielo for tonight. The biggest shock of the session came when the Americans (T-11th) and Australia (13th) failed to qualify for the final for the first time ever. Each team had a pair of 49-plus swims that ruined their chances. Along with Russia and Brazil, the final will feature Italy, France, Japan, Canada, Poland and China. Certainly a different looking final in this event than we are used to. No one had a split that jumps out, with Sukhorukov, Marco Orsi of Italy, Kyle Chalmers of Australia and Pieter Timmers of Belgium the only ones under 48 seconds. Russia, Brazil and France will battle it out for the medals tonight.

Anybody find a stream for finals…starting soon. i watched prelims on USAGOALS but no finals being streamed on it

I got a eurosport stream going right now.

Is SwimSwam about to crash? Too many visitors?

Cielo won’t swim. Seems he is injured or sick.