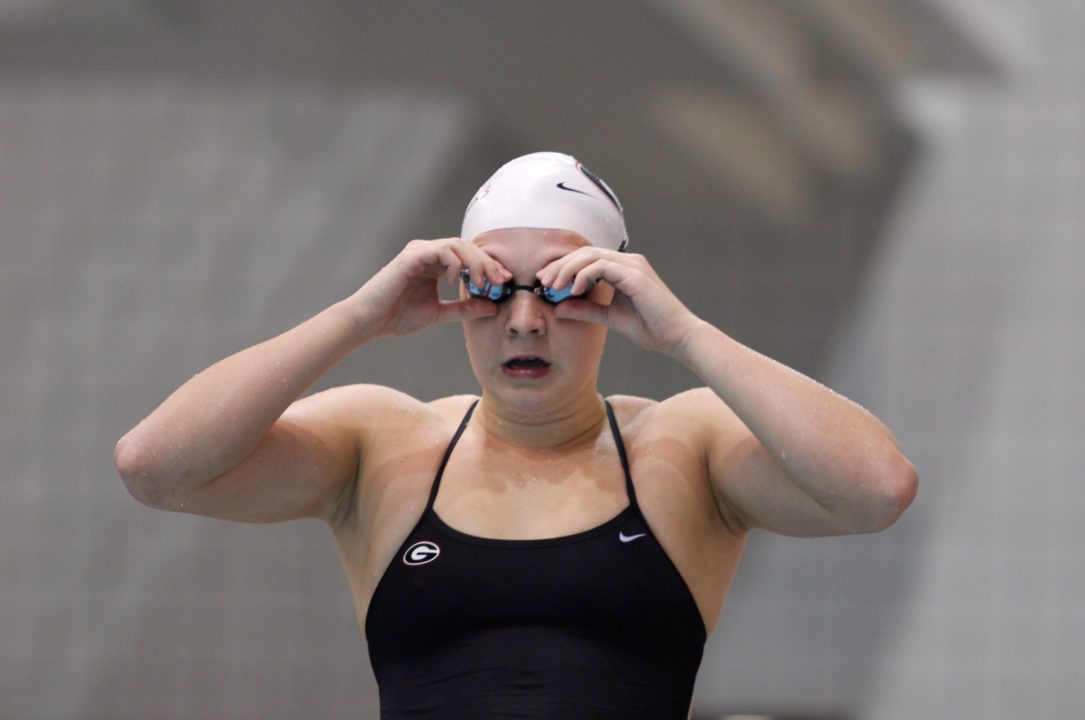 Georgia sophomore Brittany MacLean comes in with the time to beat in the mile, but there are a lot of veterans who are looking to take the crown. Archive photo via Shanda Crowe

If you know a little something about the mile at a championship meet you know it’s really two races: there are the top eight who get to swim against each other at night, and then there’s everyone else competing in the morning heats. That group has a tough job; in vying for a spot on the evening podium they need not only to beat everyone else in their heats, but also to hope someone in the championship final doesn’t drop any more time. It happens, though. Last year Brittany MacLean was the fastest out of the morning by 10 seconds, which put her ahead of two top-eighters.

Being one of only two events (with the 800 free relay) that is swum as timed finals, the mile doesn’t allow swimmers the luxury of being able to refine their race strategy between prelims and finals. And there is almost a different strategy for every miler: some take it out early and hope to hold on; others are known as back-half swimmers; still others build into their finish. Some are so consistent they don’t even vary their tenths; others make you wonder if the pool isn’t tilted just a bit.

This year’s milers are fast. The entire championship heat, plus the top two morning swimmers, all come in with “A” cuts; this hasn’t happened in the last three years. It’s interesting to note, though, that with the exception of Stephanie Peacock’s meet record-setting swim in 2012, the first, eighth, and sixteenth place times have remained somewhat stable over the past five years. (Author’s note: I couldn’t find psych sheets prior to 2011.)

The eight who will be competing in this year’s championship heat are:

Brittany MacLean, sophomore, Georgia (15:40.77): MacLean comes in with the fastest seed time by 5.5 seconds, which she obtained when she broke the meet record at SECs. (Interestingly, four of the other seven lanes in the championship final will be made up of SEC milers.) MacLean was seeded with a 16:02 last year and dropped 8 to rise to the top of the early heats. This year she is 22 seconds faster. That’s almost a 50.

Alicia Mathieu, senior, Florida (15:46.17): Mathieu finished fifth last year, twelfth in 2012, and sixteenth in 2011. Her seed time, from the Ohio State Invitational in November, is 13 seconds faster than her 2013 entry time. Mathieu finished fifth at SECs, off her time by about 12 seconds. But with the NCAA’s top performance already in her pocket, Mathieu could afford to use the SECs as a trial run and yet she still put up a pretty good swim.

Leah Smith, freshman, Virginia (15:47.99): Smith has had an incredible freshman year, going best times and leading the Cavaliers’ distance group. Her seed time comes from ACCs in February, in which she beat Stephanie Peacock by 4 seconds.

Amber McDermott, junior, Georgia (15:50.45): McDermott comes in with a seed time 11 seconds faster than last year’s. At 2013 NCAAs she was seeded eighth, dropped 9 seconds in finals and ended up fourth on the podium. She has been a consistent point-winner for the Bulldogs and we like her chances this year.

Sarah Henry, junior Texas A&M (15:52.74): Henry was runner-up in this event at 2013 NCAAs and thirteenth in 2011. Her seed time comes from her third-place finish (behind MacLean and McDermott) at SECs and is about 7 off her entry time last year.

Danielle Valley, freshman, Florida (15:53.94): Valley has had a successful freshman year with the Gators, achieving lifetime best times in both the 500 and 1650. She finished fourth at the super-loaded SECs, just ahead of teammate Mathieu.

Lindsay Vrooman, senior, Indiana (15:54.68): Vrooman finished third at NCAAs last year and sixth the year before. Her seed time is from Winter Nationals, although she was within a half a second of it when she won B1Gs in February. Both times are about 3 seconds behind her 2013 entry time. Vrooman is a strong, consistent miler and this could be her year.

Who to look for in the morning heats:

Samantha Harrison, sophomore Oregon St (15:55.57): Harrison is the early-heat favorite, having dropped 20 seconds to win Pac12s over some strong competitors. The question is how much more she’s got in her. She swam a very well-paced mile at Pac12s; it would be nice to see a western presence in the top eight.

Samantha Harding, sophomore, Minnesota (15:58.12): Harding finished second to Vrooman at B1Gs, going her best by 20 seconds and picking up the last “A” cut of the 2014 mile entrants. She’s had quite a breakthrough this year and may have a bit more in the tank.

The only others seeded under 16:00 are two freshmen: Rachel Zilinskas, Georgia (15:59.51) and Tjasa Oder, Arizona (15:59.88). Zilinskas is obviously thriving at Georgia; she took sixth at SECs and went her best by 30 seconds. Oder competed for Slovenia in the 2012 Olympics, finishing 25th in prelims of the 800. It’s hard to assess whether she’s still getting acclimated to yards in her first year of collegiate swimming or if she’s got a big swim in her, but she’s someone we’re keeping an eye on.

It is interesting to look at which teams have been the biggest beneficiaries of the distance points at NCAAs over the last several years:

We don’t say go get em tiger for nothing! We know she has lots of power still left in her! Sammy has made huge strides this year and moving up into the championship heat is putting even more fire in her!