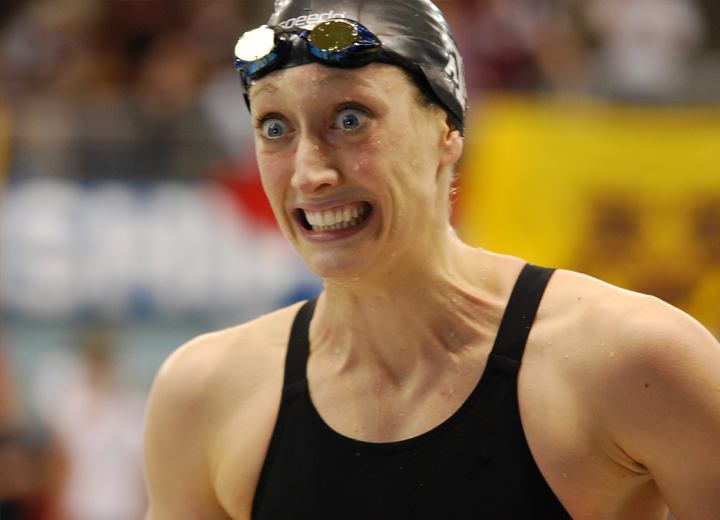 Texas A&M's Breeja Larson got one of two NCAA Records on the second night of the 2014 NCAA Championships. Current photo via Janna Schulze/SwimSwam.com

The middle night of racing at the women’s NCAA Championships starts at 7 PM Central tonight, with Georgia looking to extend its lead after a big first day. Stanford hopes to stay hot after sweeping the relays on night 1, and Cal will have its stable of 100 backstrokers pushing to get the Golden Bears back into contention.

We’ve also got a rematch of Missy Franklin vs. Brittany MacLean in the 200 free after MacLean won a touchout for the NCAA record in the 500 last night.

Our prelims recap is here.

Check out our analysis of the ups/downs and our scoring comparison of prelims vs the psych sheets here.

All the links you need to follow the meet, including video, are here.

What’s really intimidating about that relay is that they only graduate Lee, and their medleys should actually get scarier next year with the addition of swimmers like Janet Hu and Simone Manuel, among others.

Tennessee, the defending champions, took 2nd in 1:35.32, with a 26.40 split from Molly Hannis. Florida was 3rd in 1:35.42 with a 21.29 Natalie Hinds anchor and a 22.71 Ellese Zalewski fly split, and neither of those splits was the beneficiary of any particularly impressive exchange.

The USC women, with Kendyl Stewart appearing to feel significantly better in the evening session, won the B Final in 1:36.20. Stewart split a 23.20 on her fly leg, which was the third-fastest of the entire field. Carlson also split 25.78 on the breaststroke leg, which as far as we can tell is the fastest breaststroke split in history.

Stanford head coach Greg Meehan hammers his swimmers on their walls, on their turns, on their underwaters. It’s been obvious all weekend in Felicia Lee’s swims, and coming off of the final turn of the women’s 400 IM, it was obvious for Maya DiRado. The senior DiRado swam a 3:58.12 in the 400 IM, just three-tenths shy of the American Record, and won her second individual NCAA title of this meet.

This race was a battle the whole way between DiRado, Florida’s Elizabeth Beisel, and Georgia’s Melanie Margalis. Beisel came out of the breaststroke first, but it was her and DiRado nose-to-nose for the first 75 yards of freestyle. But then, coming off of the final wall, DiRado just bounced like it was a trampoline. It wasn’t even her streamline that was so particularly great, but she was in and off of that turn in an instant, and by the time her feet hit the wall she had about a yard on Beisel, and wouldn’t relinquish it.

This women’s 100 fly almost became the biggest “where did that come from” NCAA title we’ve seen in a while, as SMU’s Marne Erasmus held a sizable lead on everyone but Cal’s Cindy Tran at the turn. But Erasmus tightened up at the finish, and Stanford’s Felicia Lee, with the advantage of fantastic underwaters probably leaving her just a little bit more on her last couple of strokes, winning in 50.89.

Denver’s Sam Corea won the B-Final in 51.62. Her fastest time, and the school record, coming into this season was just a 53.20. Liberty’s Jess Reinhardt took 10th overall in 51.72, making her the second All-American in school history.

Missy Franklin, one of the greatest female athletes on the planet, set Minneapolis on fire with a blistering new NCAA Record, American Record, U.S. Open Record, and fastest of all-time swim in the 200 yard free, posting a 1:40.31 to win.

As they say in golf, sometimes, you have to let the big dog eat. While ‘team’ is very important in college swimming, as it is in all team sports, when it’s time, the stars have to take over. It was clear from the beginning of this race, that this was Missy’s moment – she split 23.4 on her first 50, and a 48.7 in her first 100 yards. That time was her first career NCAA title, in a relay or an individual swim. (Read more about her record-breaking swim here).

Penn State’s Alyson Ackman, a two-time Big Ten Champion, took 5th in 1:43.81. As compared to last year, when she took 37th, another year’s experience has done wonders for her carrying her speed through to NCAA’s.

Coming out of prelims, this women’s 100 breaststroke, this race was wide-open. In finals, though, Texas A&M’s Breeja Larson closed the door on her second 50 with a total time of 57.23, splitting 27.0/30.2 en route to her 3rd-straight title in this event.

Right with her at the turn, though, was a crew of the best women’s breaststrokers we’ve ever seen at the NCAA level, certainly if you take time without context at least. Wisconsin-Milwaukee’s Emily McClellan placed 2nd in 57.76, Notre Dame’s Emma Reaney was 3rd in 57.79, and USC’s Kasey Carlson took 4th in 58.47. Note that the swim for the senior McClellan would have broken the NCAA Record as it stood when she enrolled at UW-Milwaukee, which is a significant milestone for her.

Stanford’s Katie Olsen took 5th in 58.70, leaving her as only the second Cardinal swimmer in history under 59 seconds (behind only the great Tara Kirk). Tennessee’s Moly Hannis placed 6th in 59.66, Alabama’s Kaylin Burchell was 7th in 59.84, and SMU’s Tara-Lynn Nicholas was 8th in 1:00.44.

Texas A&M senior Paige Miller, who we didn’t even pick to be in our top 8 (though A&M fans knew better), just missed her leadoff split from the relay, but in yet another great finish at this meet just snuck past Cal’s Cindy Tran for a 50.81.

Indiana’s Brooklynn Snodgrass took 4th in 51.05, and Virginia’s Courtney Bartholomew was 5th in 51.12. Bartholomew had the fastest in-season time in the country this year, and wound up not too far off of that in finals.

In the B-Final, Georgia won another heat, though not having any scorers in the A-final, with a 51.47 from Olivia Smoliga. Florida’s Sinead Russell finished 10th in 51.82.

The flood gates are open for Georgia diving. When senior Laura Ryan transferred in from Indiana prior to last season, the Bulldogs didn’t have a single NCAA diving champion (on the women’s side) in their history. Now, Ryan has won two this year, and the platform (which was her best event last season) is yet to come.

Ryan posted a score of 423.15 on the 3-meter, which was over 20 points clear of Texas’ Maren Taylor. That’s a huge move-up for both swimmers as compared to last year, where Ryan took 13th and Taylor took 17th.

The Texas women scored two in that A-Final, plus one in the B-Final, which is a good boost for their chances at top 10 finish.

Missy Franklin, after a relatively quiet first day of this meet, caught fire on day 2 of the 2014 NCAA Women’s Championships.

We’ll cut straight to the end of this race, where Stanford was charging hard on Georgia, and the two were each two seconds. It would have looked like it was a two-team battle, if you didn’t know that Cal’s anchor was Missy Franklin, who about an hour earlier had swum the fastest 200 yard freestyle in history.

To the amazement of all in attendance, Franklin split a 1:40.08 and made up the two-and-a-half second gap on both Georgia and Stanford to give Cal the win in 6:54.94.

After this year’s class graduates, it looks like MacLean is ready to take the mantle of the next great Georgia freestyler, as she’s shown that great improved speed that all of the Georgia middle-distance swimmers develop as their career goes on.

Top 5 team standings after day 2 are below. A full scoring breakdown after day 2 can be seen here:

Congrats to Stanford on another upset relay! Is the 23.56 leadoff by Flea an American Record?!

I don’t think 50 SCY Fly, Back, and Breast times are considered American Records. I am pretty confident that Coughlin was 23.4 and Bootsma was 23.4 last year.

U.S. Swimming started keeping records last year I think, but you’re right, but I just looked it up on their website and Bootsy’s got the record from last year’s NCAA’s, 23.40.

Also look at USC’s splits to win the B final – Carlson almost out split some backstrokers with an amazing 25.7! Half a second faster than Larson.

Anybody know why Brandon scratched 200 free this morning? Never saw the news.

I follow Arizona on Instagram and it said she was getting IV’s this morning hoping to return to the meet. Out with a stomach bug that has taken down two Wildcats. So unlucky, Bear Down girls!!

Kendyl Stewart was sick too which is too bad as she could have had a shot at the 100 fly title but only got 18th.

Kasey Carlson’s 25.7 breast split is the fastest I can ever remember.