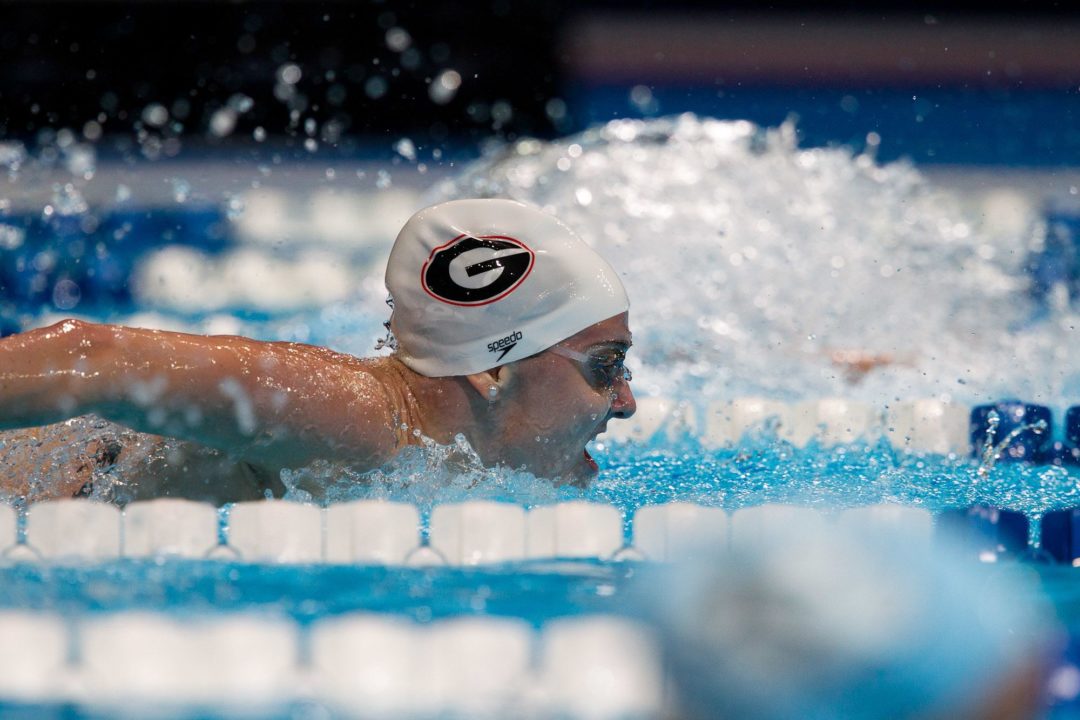 Georgia's Lauren Harrington should certainly place higher than her seed in the women's 100 fly, and will be looking to win as her team hasn't lost a race yet at the 2014 SEC Championships. Archive photo via Tim Binning/TheSwimPictures.com

Day 3 of the 2014 SEC Championships are underway in Athens, Georgia, and after a blistering first two days of the fastest conference meet in the country, things really begin to get interesting on Thursday with no relays, but a lot of individual swims.

The 3rd out of 5 days will include the 400 IM, the 100 fly, and the 200 free. On the women’s day, that should mean another huge day for Georgia (who’s thus far undefeated in events). On the men’s side, Florida has been outstanding, but Auburn still holds a huge lead; Florida has a chance to really cut into that on Thursday, though there’s probably not enough events for them to actually overtake the Tigers in the scoring.

To see an update of scoring through two days, see our day 2 recap.

It’s hard to draw a ton of conclusions about favorites coming out of prelims of a 400 IM, as all of the title contenders, almost by definition, have to conserve energy in prelims.

Still, the favorite at SEC’s, Florida senior Elizabeth Beisel, has taken the top seed in the women’s 400 IM with a 4:05.64 and will hold a middle lane tonight. The only leg where she was really pushing was her breaststroke; the rest of her IM looked pretty casual for her. She’s already been 4:00.5 this season.

Florida’s Jess Thielmann was 7th in 4:13.03, and Tennessee’s incoming transfer Lauren Driscoll rounded out the A-final by dropping almost 9 seconds for a 4:13.37.

Texas A&M’s Cammile Adams, who would’ve certainly been a top three contender, at least, in this race was DQ’ed after putting up a 4:05.8 of her own. That’s a huge blow to the Aggies, as Henry was their only other entry.

The defending NCAA Champion Chase Kalisz took the top seed in the men’s 400 IM prelims with an extremely fast prelims time of 3:41.85. In many cases, that would put him comfortably ahead of the field, but in this one, he’s got Florida junior Dan Wallace close behind in 3:42.45.

Given that Kalisz was a best time in the 200 IM on Wednesday, and with how well Wallace swam to run away with the 500 free on Wednesday, it’s going to take sub-3:40 to win this race, that’s for sure.

Meanwhile, in terms of the team battle, though they can’t formally score points in prelims, Florida made a big dent on Auburn with depth in the 400 IM that they really needed. They’ve got three swimmers in the top 8, to Auburn’s none. Aside from Wallace, Matthew Elliott is the 3rd seed in 3:44.17, Carlos Omana is the 4th seed in 3:44.30, and Connor Signorin is the 7th seed in 3:44.88.

Kentucky’s Christina Bechtel had a huge swim in the 100 fly mid-season, and so far at SEC’s she’s backed it up with a 51.70 for the top seed headed into finals.

Depending on where she’s at with her rest right now, she could be an NCAA title contender this year in what appears to be a wide-open field.

Florida’s Ellese Zalewski was 2nd in 51.90, followed by Missouri’s Dani Barbiea. Those three are the three fastest 100 butterfliers in the country coming into this meet, which should line up for a big final (even though we can assume pretty safely that all three have their eyes set beyond this meet).

This race will have a lot of very important swims from the programs outside the “big players;” as compared to what we’ve seen for most of this meet, there’s only 9 out of 24 finalists from Georgia, Florida, and Texas A&M, leaving a lot of room for swimmers from the rest of the conference (like Bechtel, whose Kentucky team is in 10th) to shine.

The Florida and Auburn men about held-serve in the day’s second event, with placings in the A-finals having the potential for big point swings here.

Florida’s Marcin Cieslak took the top seed in 45.59, followed by Georgia’s Doug Reynolds in 45.86, as part of a senior-heavy final.

One of the exception to that senior rule was Auburn’s Arthur Mendes in 46.33 for the 3rd seed. Auburn has been waiting for him to explode since he arrived on campus mid-season last year with big long course credentials, and that swim is a new lifetime best for him.

But sandwiched in between them is Tennessee’s Lindsay Gendron, who unlike her first swim in this meet in the 500 was taking no chances of missing out on the A final wutg a 1:44.37.

She will be swimming in a sea of red tonight; in addition to the two swimmers to her right, Vreeland and Mattern, she will have Brittany MacLean, the 4th seed (1:44.96), to her left on the blocks. MacLean already won the 500 earlier in the meet.

The men’s 200 free was another big “win” in prelims. Though you can’t score points in prelims, you can certainly miss opportunities to score them, and Florida didn’t miss many on Thursday.

Freshman Mitch D’Arrigo took the top seed in 1:33.70, followed by sophomore Corey Main. D’Arrigo was also the top seed in the 500 free earlier in the meet, and seems to have no fear of going after his prelims swims.

Alabama’s BJ Hornikel was 3rd in 1:34.32, and Florida’s Sebastien Rousseau was a 1:34.43, meaning that Florida will head into the evening session seeded with three of the top four swimmers in this event.

Is this all butterfly kicks on the the breaststroke turns?

She truly wasn’ dq. The one judge admitted to mistake. But since official raised her hand, the call stands. Sucks for the swimmer.

The Referee will consult with the judge before the call is official. If the judge truly did not want to stick with his call, it will not stand. In addition, no one except those on the deck will have any information on how that discussion went.

KY’s Bechtel was out like a bat out of hell in that 100 fly – 23.6. A back half that’s anywhere near that good would get her into 50-point territory.

Tons of points in the 400 IM and 200 Free…that lead is going to shrink big time!