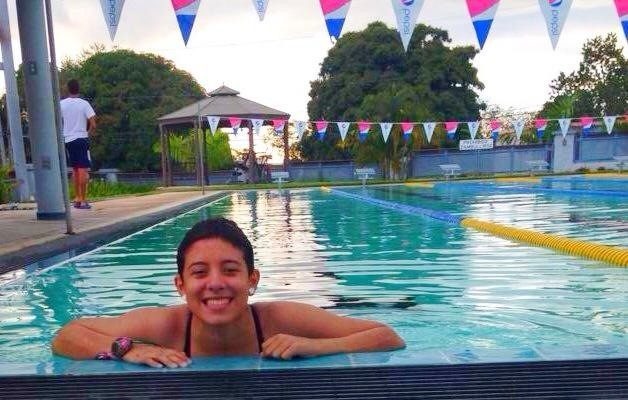 It's been a whirlwind 10 months for 17-year-old Angeli Rivera. But for the Puerto Rican swimmer, the roller-coaster ride is right back where it started - in the pool. Current photo via Angeli Rivera

It’s been a whirlwind 10 months for 17-year-old Angeli Rivera. But for the Puerto Rican swimmer, the roller-coaster ride is right back where it started – in the pool.

Heading into her senior year of high school, Rivera was hit with the landslide no one, much less an ambitious, college-bound athlete with a bright future, wants to face. On August 2, 2013, Rivera was diagnosed with Hodgkin’s Lymphoma, a cancer of the lymph nodes.

Rivera says she first noticed something wasn’t right with her body while putting in lengthy summer swim practices. Doctor appointments revealed a cancerous tumor between her heart and lungs, and suddenly a carefree senior year turned into a carousel of treatments and medical visits.

For Rivera, though, the darkness of that situation was always contrasted by an unflinchingly positive attitude.

“I saw it as an opportunity to discover more of myself,” Rivera says. “And now I really see it as a blessing.”

August to December were filled with chemotherapy, multiple surgeries and intense radiotherapy for Rivera, who had her final installment of the painful treatments on December 31st. But as the dawn of January 1st brought in a brand-new year, Rivera, too, began a new chapter in her story – a brighter chapter. 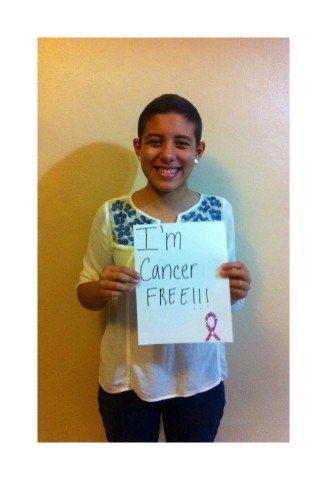 “On February 6th, I was declared cancer-free,” Rivera said. “Words cannot describe how great that felt.”

And it wasn’t long before Rivera, a longtime competitive swimmer, was back in the pool. In April, just four months after finishing treatment, she started training once again, ready to jump-start her career at the college level. (The headline photo above was taken on Rivera’s first day back in the water.)

“Truth is, you can take a girl out of swimming, but you’ll never take swimming out of a girl,” Rivera said this week.

“I’m trying to get back into shape to swim in college,” said the 200 breaststroker who will attend the University of Puerto Rico next fall.

The struggle to do so will be significant. Doctors have told Rivera that due to the physical toll cancer and chemo have taken on her body, she’ll likely never get back to the physical state she was once in, and that reaching her old lifetime-bests might be an unattainable goal.

But Rivera doesn’t seem to settling on those predictions as set in stone. Far from it. In fact, in Rivera’s mind, she’s coming off a resounding win in the biggest race of her life, and the momentum is all hers.

“In August my new competition was against cancer,” Rivera said. “It was my biggest meet yet and the feeling of just being cancer free is better than winning a gold medal at the Olympics.

“Now, my competition is against the odds. Doctors told me my performance would never be the same due to the surgeries and to the chemotherapy. I’m competing against all odds and I’m hoping for the best.”

Rivera says her overall goals at this point are to get to a better physical and mental condition than she was in before, to swim faster than her previous lifetime-bests, and to return to the top of her native breaststroke events.

Rivera is also a writer, and kept a blog the past year to document her journey. It’s called “Playing the C-Card,” referring to the dreaded c-word “cancer,” and you can read more about her journey by following this link.

Swimming has long been an influential part of Rivera’s life – “If anything has taught me about life, it’s swimming,” she writes in a blog post dedicated to the sport – and it appears the sport’s presence in her life will continue. And even though she’s making the leap to the college level, Rivera seems well-equipped to handle the transition to a new swimming arena.

After all, she’s already beaten cancer. How much harder could the competition be?