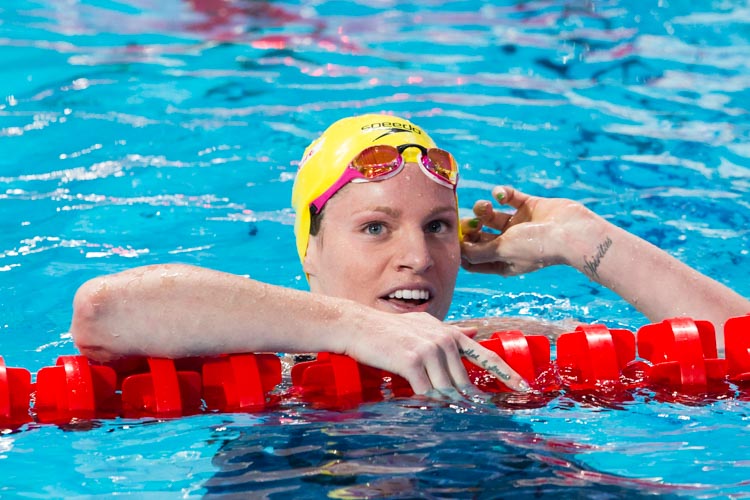 A Couple of Thoughts on Day Three of the Australian Championships

The 2015 Australian Short Course Championships wrapped up in Sydney this past weekend, but not before two world records, over a dozen All-Comers records and numerous Commonwealth and Australian records hit the floor.

Mitch Larkin was one Dolphin swimmer who scored a shiny new World Record this past weekend, registering a mark of 1:45.63 in the men’s 200m backstroke. Larkin also laid waste to the Australian and All-Comers Records in the 50m and 100m backstroke events, earning gold in each with times of 22.91 and 49.04, respectively.

As such, Larkin was a monster contributor to his club’s, St. Peters Western, overall team title at the meet, where they swam away with the championships with a total of 534 points. Emma McKeon was another star of the St. Peters Western show, claiming titles in the 50m butterfly and 200m freestyle, wrangling in new Australian and All Comers’ Records in the latter.

Young rising breaststroke star Matthew Wilson scored first place points for his Sydney Olympic Park Aquatic Center (SOPAC) squad, while the likes of Jessica Ashwood and Ellen Fullerton did their part for Chandler to come in 4th place as a team.  Ashwood stood atop the podium across the 3 women’s freestyle distance events – 400m/800m/1500m – while Fullerton beat the field in the women’s 400m IM.

Although not within the top 5 clubs, Cate Campbell’s Commercial Swimming Club and Emily Seebohm’s Brisbane Grammar fall within Swimming Queensland, who took the state title with 239 total points.  Campbell scored an incredible new world record in the 100m freestyle (50.91) as the first half of her 200m free race and also registered a new women’s 50m freestyle All Comers record en route to winning the gold.  Individually Campbell also won the 100m freestyle to double up on sprint events.

Seebohm rocked wins across the trio of backstroke events to score major points for Brisbane and, in turn, Swimming Queensland. Seebohm racked up All Comers Records among the trifecta of golds and also scored a new Australian record in her 200 backstroke.

QLD & NSW may be relatively even at Age Group level, but when you get to Open jeez there is a big differences.

The best of the NSW swimmers leave for greener pastures . Perhaps SNSW needs to look at the other states for guidance.
JF’s habit of importing swimmers to NSWIS may be finally hitting hard.

I hope some mature ex swimmers might take over the board of SNSW and lead NSW swimming to greater things.

Serious problems in NSW swimming, continually getting dominated by QLD