Last year there were three swimmers who went sub-53, led by Cate Campbell at 52.62, and two this year with Bronte Campbell and Femke Heemskerk tied at 52.69. Based on the fast performances the last few years, we should see some more 52 second swims this summer. Archive photo via Victor Puig 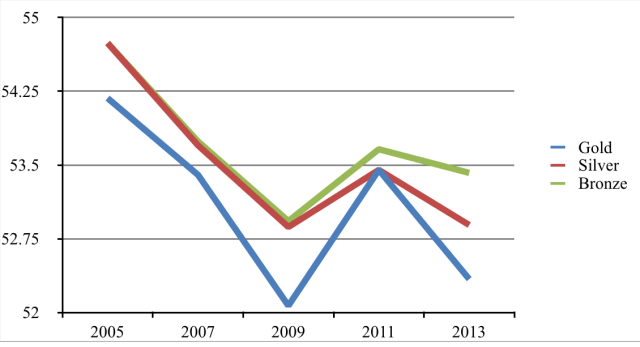 Last year there were three swimmers who went sub-53, led by Cate Campbell at 52.62, and two this year with Bronte Campbell and Femke Heemskerk tied at 52.69. Based on the fast performances the last few years, we should see some more 52 second swims this summer.

Cate Campbell has really established herself the last few years, having or sharing the top time in the world in this event the last three years, including a world title in 2013, and gold at both the Pan Pacific Championships and Commonwealth Games. She leads an amazing group of female Australian sprinters, who among them hold 5 of the top 8 times in the world this year. She will be the one to beat, and will look to improve her 52.34 from the last world championships.

Femke Heemskerk has really come on the last few years, with a 5th place at the 2013 World Championships, the 4th ranked time in the world last year and a share of the top time in the world this year at 52.69. She also became the short course world champion in December in the 100, and swam well at the Arena Pro Series in Santa Clara this past weekend, winning the 100 freestyle with back to back 53 second performances in prelims and finals at the outdoor pool where fast swims are usually hard to come by. She should be very fast in Kazan and will challenge for the gold medal.

Bronte Campbell has become a top performer in the sprint freestyle events recently, including cracking the 53-second barrier last year. If she can do that again she’ll be in contention for a spot on the podium. Ranomi Kromowidjojo ascended to the top of the world in the event when she won gold at the 2012 Olympics. Since then she has been fast but has been replaced at the top by Heemskerk, Sjostrom and the Campbell sisters. She currently sits 7th in the world this year, and will look to regain her place as one of the top 100m freestylers in the world this summer.

Americans Simone Manuel and Missy Franklin both showed great form last summer posting the 5th and 6th fastest times in the world last year. Manuel has looked strong this year, however Franklin has hardly swum any long course meets until this weekend in Santa Clara. She did okay in Santa Clara considering she was tired, but she swam exceptionally at the NCAA championships earlier this year. Now that she is a professional we can expect her to be ready to go for the world championships.

Michelle Coleman is a young Swedish sprinter who has come onto the scene the last few years. She had a 12th place finish at the 2013 championships, and followed that up with a 10th ranked 53.66 last year along with a 5th place at the short course championships. She hasn’t swum much long course this year, but she did post a strong 54.23 at the Australian Nationals this year. Despite not racing as much as some of her competitors this season, she could make a push for a finals berth this summer if she can perform how she did last year.

My darkhorse selection is Pernille Blume of Denmark. Jeanette Ottesen has long been Denmark’s top female sprinter, but Blume has slowly been working her way through the world rankings the last few years. She was 19th at the 2012 Olympics, 12th at the 2013 Worlds, and swam a 11th ranked 53.69 last year. She has been racing a lot this year, with 7 meets already under her belt in 2015, swimming well throughout. Come the peak meet of the year at the world championships, should could continue the improvements she has shown and make a push for a spot in the top 8.

Others to watch for in this event include Siobhan-Marie O’Connor and Francesca Halsall of Great Britain, Arianna Vanderpool-Wallace of the Bahamas, Charlotte Bonnet of France, and Belarusian Aliaksandra Herasimenia.

Hate to think where James is pulling these projected times from but they are certainly optimistic to say the least. A time below 52.5 from anyone is far from a given as we haven’t seen one since 2013. I can see only 4 likely sub 53s; namely C1, Heemskerk, Sjostrom & C2. Kromowidjojo hasn’t been there since 2013 and hasn’t really threatened to do so. Manuel is still some way off; her PB last year (surfing C1’s bow wave in a relay leg) frankly looked an anomaly against her other performances at that meet and elsewhere. IF she can get back to that time in Kazan, that would frankly be a step forward. Whilst C1 deserves favouritism due to the… Read more »

Not sure what your beef is with Manuel, but I doubt there was much surf given it was a RAINY winter night in Australia. Same scenario indoors, and she probably would have been sub 53.

I am not sure why you’d think CW has “beef” with Manuel. Her 53.25 was an outlier, she wasn’t that side of 53.5 at any other point. She is clearly an extremely talented athlete, but look at the list of 52s swimmers and she just doesn’t have the same pedigree just yet…

Of course, stats are merely stats, but the general rule is that you need a lot more speed than Manuel currently has to go sub 53.

Coach; these were Manuel’s other 100s at the very same meet. Heats 100:53.75 Final 100: 53.70 Anchor leg 4xMED: 53.45 As far as I’m concerned these times stand as “facts” and support an assertion that the 53.25 was an outlier influenced by the circumstances of that particular swim. If she WAS on that sort of form then her 100final & medley relay anchor should be “in that same ball-park” (ie within 0.25) …… but they weren’t. We had no reports that she suddenly got ill; which in any case should have seen her “withdrawn” from these events. She may blitz the world in Kazan, or in Rio …. or in the future but, at this point, we can only go… Read more »

The operative word is ARGUABLY; flying start relay legs don’t count as valid times. I would agree with you that C1 appears the “most likely suspect” to go significantly below 52.5.

Of course, I don’t remember the RT of Campbell for the 51’59 but I think it was a quite safe relay change… and it would not represent 1 full second anyway. But there are other parameters.

She split 26.8 for the final 50m of that relay split. Absolutely nuts split. RT was 0.30… She probably would have cracked 52.0 or come close with a regular start. If she can put the race together (easier said than done) then 51 high is her’s