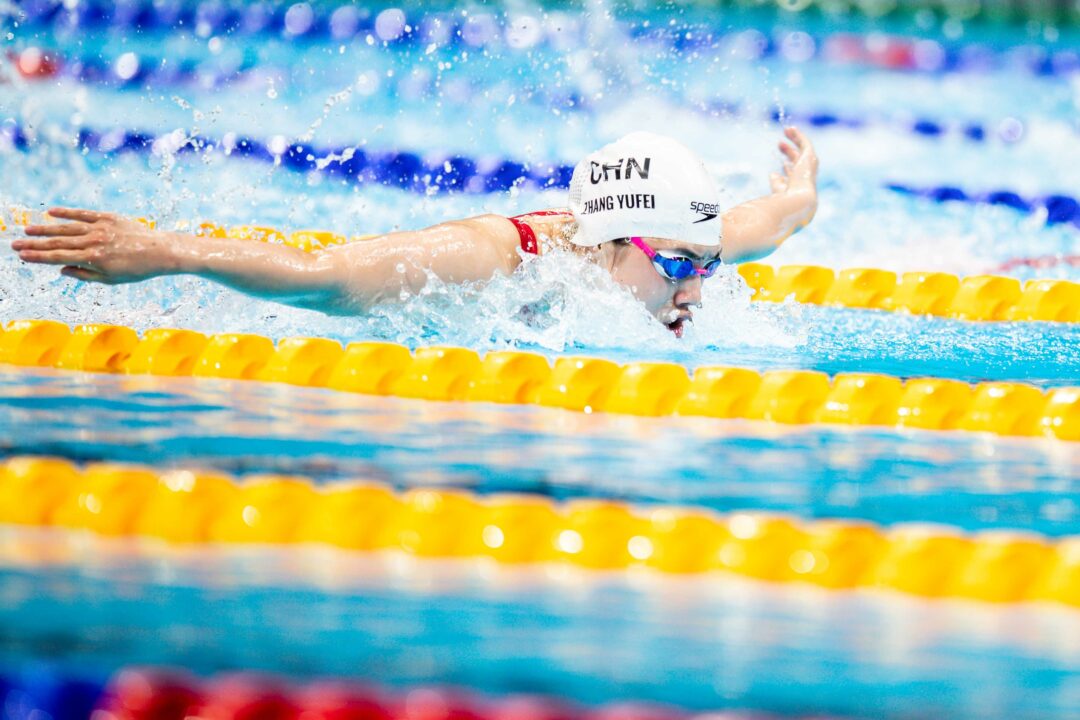 Zhang Yufei already leads the world rankings in the women's 100m fly event but the Chinese swimmer put up another solid performance in the event. Archive photo via Jack Spitser/Spitser Photography

If you’ve been following our Asian swimming coverage, then you know that the Chinese National Swimming Championships originally set to be held in April were postponed due to coronavirus concerns.

As such, China’s elite swimmers are taking advantage of every racing opportunity in order to prove their worth and earn a spot on the 2022 World Championship roster. A spot on the Asian Games team was also in their sights before the competition was postponed last week.

Zhang’s top swim came in the women’s 100 fly, where she clocked in at 56.49 in the prelims to approach the 56.24 world-leading effort she logged at September’s National Games. She nearly matched her time from the heats in the final, touching in 56.56.

Zhang had the best year of her career by a mile in 2021, winning gold at the Tokyo Olympic Games in the women’s 200 fly and 800 free relay in addition to silver in the 100 fly and mixed 400 medley relay.

Qin also snagged a solid 200m breast mark of 2:08.44, rendering the 22-year-old the seventh-fastest performer in the world this season.

Qin been as quick as 2:07.35 in his career, a result he achieved in 2017 to remain as China’s national record holder for the past 5 years.

At last summer’s Olympics, Qin clocked 2:08.48 in the prelims before being disqualified, losing a spot in the semi-finals where he would’ve qualified in a tie for fourth overall.

our ladies are coming for her.

Still the favorite for Budapest.