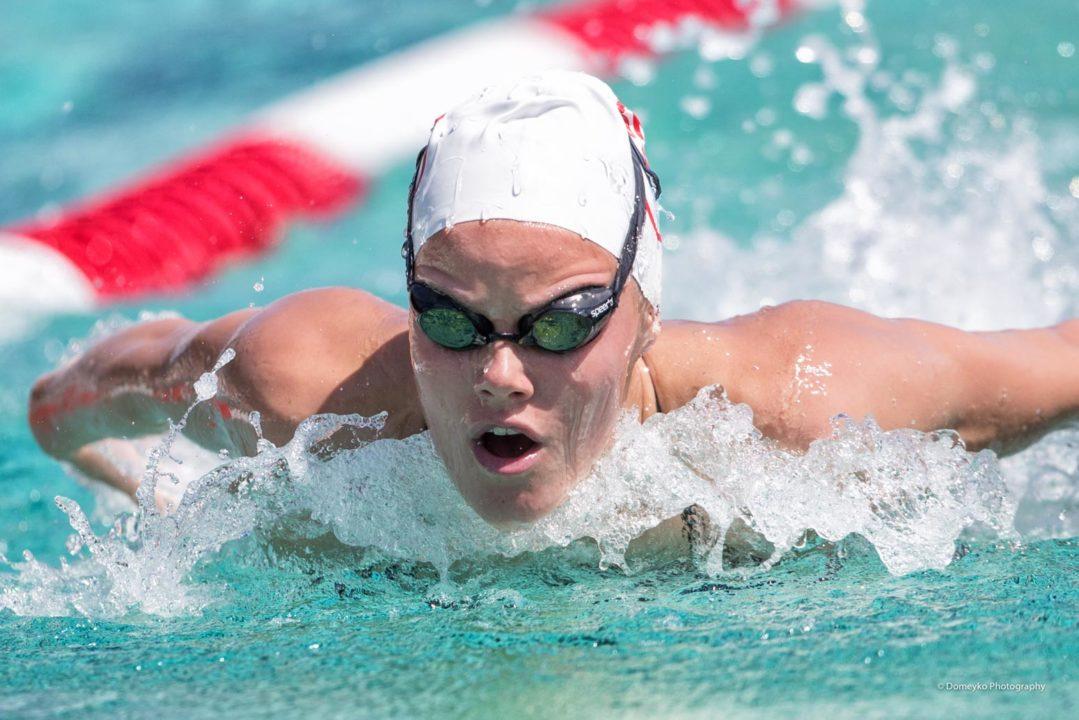 The Gators extended their winning streak over state rival FSU on Friday as the men and women beat the Noles in dual meet action. Freshman Mabel Zavaros had a strong showing for the women, winning 3 events. Archive photo via “Rafael/Domeyko Photography”

The Gators extended their winning streak over state rival FSU on Friday as the men and women beat the Noles in dual meet action. Freshman Mabel Zavaros had a strong showing for the women, winning 3 events. She got started with a 1:48.28 in the 200 free to top the field by over a second. Zavaros then had a huge margin of victory with her 1:56.85 in the 200 back, where FSU’s Shelly Drozda (1:59.32) was the only other swimmer under 2:00. In the 100 fly, teammate Georgia Marris picked up the early lead, but Zavaros chased her down on the back half to win 54.96 to 55.35.

There was an interesting result in the women’s 100 back. It’s the only judges decision result made in recent memory at a D1 swim meet. The scoreboard showed Florida State’s Emma Terebo winning a close race in 54.84, but Florida’s Emma Ball‘s touch didn’t register with the timing system. The timers for both women had clocked them at 54.65, so the judges ruled the result a tie for 1st place.

TALLAHASSEE, Fla. – Stanley Wu led the Gators with two individual event victories. The No. 3 ranked Florida men’s swimming & diving team defeated No. 21 Florida State for the eighth-straight meeting in the Fresh From Florida Sunshine Showdown at the Morcom Aquatic Center on Friday, 170–128.

Florida State jumped out to an early lead after it won the 200 Medley Relay. Bayley Main, Marco Guarente, Maxime Rooney, and Kacper Stokowski finished second with a mark of 1:28.63. Dakota Mahaffey, Chandler Bray, Isaac Davis, and Kieran Smith placed third with a time of 1:30.16.

Main collected a first-place finish in the 100 Back with a swim of 48.59. Dakota Mahaffey posted a season-best time of 49.01 and finished second.

Will Davis recorded a third-place finish in the 50 Free with a swim of 20.47, tying his personal-best time, and stopped the sweep by FSU.

Gezmis collected his second individual event win in the 500 Free with a swim of 4:30.33. Robert Finke clocked a personal-best swim of 4:30.42 and finished second. Grady Heath posted a season-best mark of 4:33.33 and placed third as Florida completed another sweep.

Fresh From Florida Sunshine Showdown
“Agriculture is a $100 billion industry in Florida, and Floridians can support their neighbors and communities by buying locally-grown and harvested products. For more information about the Florida Department of Agriculture and Consumer Services, visit FreshFromFlorida.com, or follow Fresh From Florida on Facebook, Twitter and Instagram.”

In the 200 Free, Mabel Zavaros posted a personal-best time of 1:48.28, which is the nation’s 18th-fastest time, and finished first. Tori Bindi recorded a season-best swim of 1:49.79 and notched a third-place finish.

Pearl claimed her first individual event victory when she won the 200 Breast with a time of 2:13.29.

Mabel Zavaros picked up her second individual event win in the 100 Fly with a swim of 54.96. Marris notched a second-place finish with a season-best time of 55.35.

Burns posted another season-best time with a swim of 2:01.65 in the 200 IM and won her second individual event of the day. Pearl added a second-place time of 2:02.30. Savanna Faulconer swam a 2:05.39 and placed third to complete another event sweep for Florida.

Garofalo, Dressel, Ball, and Fertel finished the meet with a combined time of 1:32.63 in the 200 Free Relay and placed second.

Fresh From Florida Sunshine Showdown
“Agriculture is a $100 billion industry in Florida, and Floridians can support their neighbors and communities by buying locally-grown and harvested products. For more information about the Florida Department of Agriculture and Consumer Services, visit FreshFromFlorida.com, or follow Fresh From Florida on Facebook, Twitter and Instagram.”

TALLAHASSEE, Fla. –  On a brisk day at the Morcom Aquatics Center, the nationally-ranked Florida State swimming and diving teams battled No.10/3 Florida on Friday in the Fresh from Florida Sunshine State Showdown.

Florida State showed its strength in the relays, sweeping all four while posting times ranked within the top 10 nationally, in addition to winning three of the four diving events.

“We pride ourselves on winning the relays,” FSU head coach Neal Studd said. “Sweeping the relays was really fun. We had some spots where I thought we could be a little bit better but overall I’m pretty excited about the day.”

The women’s team opened up by holding off Florida in the 200 medley relay for the win, touching with a season best of 1:38.97 behind sophomore Madeline Cohen, freshman Ida Hulkko, senior Leila Johnston and junior Nika Blank.  The time is the fifth fastest in the country this season.

Florida answered with a sweep in the 1000 free.

Freshman Laura Jensen led the Noles in the 200 free, posting a season best of 1:49.75 for second place and her classmate Kertu Alnek showed her consistency in the event, posting a 1:50.09 for fourth place.

Sophomore Emma Terebo worked out of lane six, touching with a season best of 54.84, tying for the win based on a judge’s decision.

The Seminoles finished first and second in their strongest event as Hulkko touched with a time of 59.03 and Kucheran was second at 1:00.71 behind season best swims. Senior Natalie Purnell also contributed fourth place points, touching at 1:02.44.

Hulkko became the second woman in FSU history to break the 1-minute barrier and now ranks second in school history behind Natalie Pierce (58.25). Kucheran’s swim moves her up to fifth place all-time.  Her swim is also the fastest in the nation this year.

The Gators answered with a sweep of the 200 fly and posted a one-two finish of the 50 free.

Junior Ayla Bonniwell continued her dominance of 3-meter from last week, winning with a score of 344.33 ahead of freshman Grace Cable in second at 313.05.

Junior Shelly Drozda led the 200 back for FSU, touching with a time of 1:59.8 for second place, holding off a pair of UF swimmers.

Florida put the meet away after sweeping the 100 fly and 200 IM.

Junior Molly Carlson and Cable added second and third place points on 1-meter with scores of 293.85 and 285.38 respectively.

The Seminoles fought until the end, coming from behind the final event, as Alnek split a 22.53 as the anchor for the win. Blank, Terebo and Johnston helped FSU touch at 1:32.48. The performance is currently the 10th fastest in the country this season.

“We had some really great swims in spots,” Studd said. “We just got out-touched. It’s one of those tough deals where you need those nine points. But we keep moving forward and we’re doing great things and we just need to keep focused.”

The Noles started the men’s meet by edging out Florida for the win, thanks to a strong back half. The team of senior Emir Muratovic, freshman Izaak Bastian along with seniors Kanoa Kaleoaloha and Will Pisani turned in a time of 1:28.38.

Florida answered with a sweep in the 1000 free and a one-two finish in the 200 free as freshman Max Mccukser led the Noles with a season best of 1:40.39.

Bastian swam a strong 100 breast, clocking 55.28 for second place. Later in the meet, Bastian closed out his 200 breast strong, surging into the wall to finish in second place with a time of 2:02.24.

Kaleoaloha went under the 20-second barrier for the third time this season, matching his 19.95 swim from last week for the victory.

Following the break, Muratovic cut into the 63-87 UF lead and turned in a first place finish in the 100 free, leading wire-to-wire at 44.45.

Kaleoaloha added another win, touching at 47.74 in the 100 fly, leading from start to finish.

Thatcher and Faminoff provided a one-two showing on 3-meter as Thatcher won the event with a score of 361.72 ahead of Faminoff at 348.40.

“Our first event was lights out,” FSU head diving coach John Proctor said. “We ran out of gas a little bit on the second, but other than that we’re doing awesome. They just keep getting better. The chemistry is awesome and they’re driving and pushing each other.”

The Seminoles closed out the meet strong, touching with a time of 1:20.31 in the 200 free relay behind Pisani, Kaleoaloha, freshman Cooper DeRyk and Muratovic for the win.

The Seminoles will host a quad meet on Saturday at 1 p.m. featuring Florida Southern, West Florida and North Florida. Florida Southern will field both a men’s and women’s team, while UWF and UNF will compete in the women’s meet.

I attended the meet and saw several FSU swimmers actually suited up for this dual meet….could explain the 59 and 1:00 100 breastrokers in November? Doesn’t make much sense to do that so early in the season….

Why does it matter? I’m sure the swimmer that went 59.0 in the breast has a lot of confidence now, and will only help her as she season progresses. I just don’t understand why suiting up in a dual meet is looked upon so negatively. I realize it’s kind of an unwritten rule, but why? The Florida swimmers could have suited up too, they didn’t, which is fine too. I don’t see any negatives with swimming a 59.0 dual meet 100 BR.

That 59.0 qualified her to NCAA. Now she can just focus on training til March.

I have no problem with that.

Yeah but that also means she won’t be able to sleep at night until March knowing that she cheate….I mean suited. 5 months without sleep can’t be good for her training. [/sarcasm]

She was the only swimmer to wear a suit, I was also there.

It’s cheating, no way around it! It is very rare that people suit up for a dual meet this early especially against a rival team. Fsu swimming is not what it used to be. Hope they can score well at conference because dual meets aren’t the ultimate determination of how talented a team is.

Seriously!? The teams are both doing exponentially better. The fact that one swimmer needed to get her cut early should not be an issue. The fact that a Gator mom wanted to spread missinformation is more of an issue for me.. Give it up!

Yeah, have to chuckle a little at the implication that a swimmer going the #1 time in the nation is a sign of the impending doom of a program. I know there’s lots of different pseudo-psychology about when to suit or not to suit up…but I can’t think of a swimmer in the country who wouldn’t take a 59.0 on November 2nd.