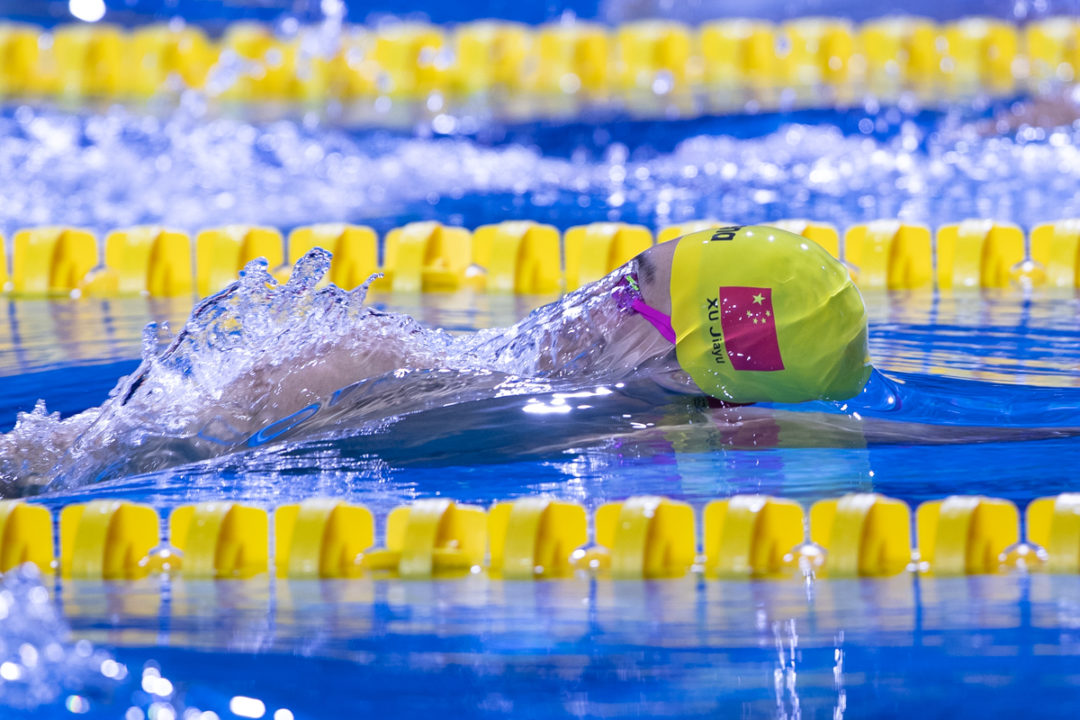 Xu Jiayu hit a morning 100m back time here at the Chinese Swimming Championships that would have taken gold at Worlds last year. Archive photo via “Rafael/Domeyko Photography”

The prelims session on day 4 of the 2020 Chinese Swimming Championships was highlighted by a history-making swim by 22-year-old Zhang Yufei.

As we reported, the woman cranked out a huge lifetime best of 55.62 in the 100m fly. En route to grabbing the top seed, Zhang crushed the previous Chinese national record and Asian continental record of 56.07 Liu Zige put on the books way back in 2009. You can read more about Zhang’s impressive outing here.

Another record-breaker here in Qingdao, Yu Hexin, was back in the water to do more damage. The man who crushed a new Chinese standard of 21.79 in prelims of the men’s 50m free earlier in this meet took on the 100m free this morning.

Hitting the wall in 48.44, Yu will have to settle for that as his final time, as he is unable to advance to the finals due to not finishing strongly enough in the pre-competition testing.

As a consolation, his 48.44 does check-in as a new personal best, overwriting his previous career-quickest of 48.47 from the 2016 Chinese Spring Nationals.

World champion and Olympic medalist Xu Jiayu made his presence known in the men’s 100m back, producing a super solid 52.37 to take the top seed by over 2 1/2 seconds. His outing here outperforms the 52.53 it took for the 25-year-old to grab gold in Gwangju last year, as well as checks-in among the top 30 fastest performances of all-time.

Finally, the women’s 200m free heats saw Yang Junxuan come out on top in a time of 1:56.38. She is China’s national record holder with her lifetime best of 1:54.98 from the FINA Champions Series this past January.