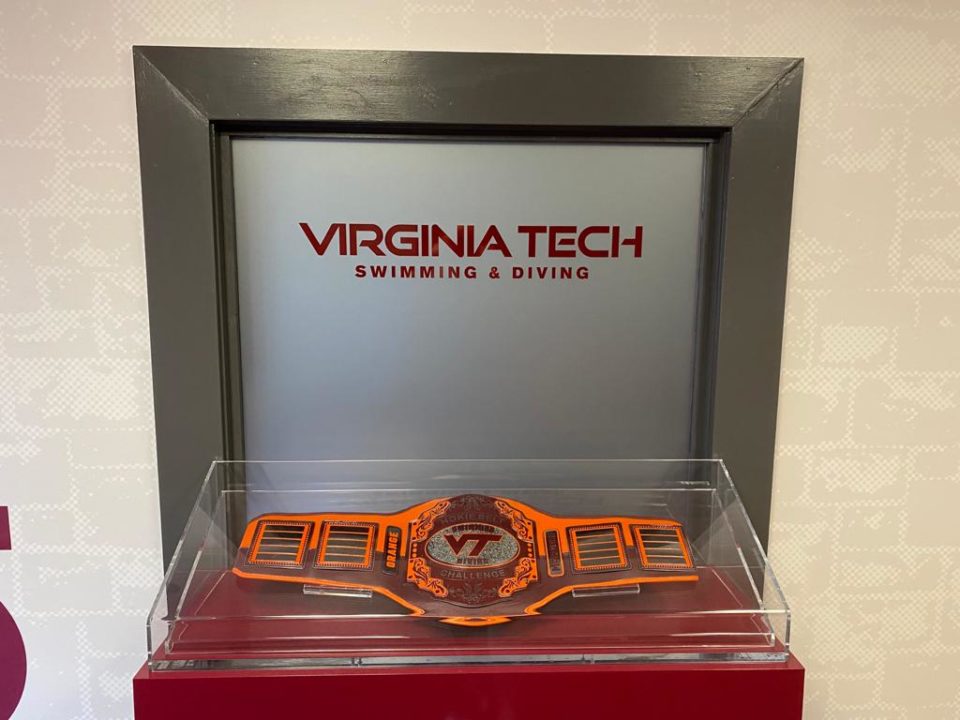 After the first of 3 intrasquad meets over the next month, the Orange and White teams are tied in the battle for the honorary team belt. Archive photo via Sergio Lopez-Miro

The Virginia Tech Hokies kicked off the first of a 3-meet intrasquad series that they’re dubbing the “Hokie Belt Challenge.”

The series is designed to give the team some healthy competitive motivation ahead of their first intercollegiate dual meet on November 7th when the team travels to race against Duke.

As a freshman (or incoming transfer), each swimmer and diver are placed on one of two teams: Orange or Maroon, representing the school colors. They remain on that team throughout their careers at Virginia Tech.

Athletes are awarded ‘points’ both for performance in the pool and performance out of the pool, which includes awards for academic success and “Hokie Spirit.” Teams can also lose points if their members are late to practice, miss class, or have other negative marks on their record.

“The idea is to keep the team competing in a healthy way internally during the year and to keep building our tradition and to keep learning and understanding what it means to be a Hokie,” head coach Sergio Lopez said in describing the purpose of the contest. “The team takes a lot of pride in it.”

Last year, the first year of the contest, the Maroon Team won both the men’s and women’s side. Winning teams have their honors permanently etched onto a ceremonial belt, akin to those used for boxing champions.

After the first Intrasquad, the teams are currently tied with 22 points each. The Orange Team won the women’s and overall combined scoring, which was good for 20 points, while Maroon won the men’s scoring, good for 10 points. Maroon, however, has made up the gap with out-of-the-pool recognitions.

The Orange Team women won by a narrow 157-151 margin, though the highlight performer of the day was actually Maroon’s Emma Atkinson. The freshman, who was ranked as an “Honorable Mention” among SwimSwam’s top recruits in the class of 2022, won all 3 individual events she swam on the day.

Last season, now-senior Emily Meilus was the Hokies’ top backstroker, with season bests of 54.18 and 1:55.00, respectively to score 18 points at the ACC Championships. Atkinson is already faster than that time in the 100 back, and just .01 seconds away in the 200 back, showing what an immediate impact she’ll have on the program.

Atkinson also split a new best time of 24.93 leading off Maroon’s runner-up 200 medley relay. That gave her team an early lead, but Orange charged late and eventually won the race easily, thanks in large part to a 23.89 fly split from junior Joelle Vereb.

The team’s other highly-ranked recruit, #16 Chase Travis, picked up a pair of wins in her Hokie debut representing the Orange Team. The U.S. National Team member in open water won both the 1000 free (10:13.62) and 500 free (4:59.87). In the latter race, she just-out touched her sophomore sister Brooke Travis, who swam 5:00.61. Brooke opened her season last year with a 5:05 in the 500 free, so Saturday’s swim is a significant improvement on that result.

As tight as the 6-point gap was on the women’s side, the men’s battle was even tighter, with just 2 points separating the teams at the end.

That means the battle came down to the final 200 free relay, and it was the Maroon team’s depth, going 1-3, that was enough to pip Orange for the event and meet title.

That winning Maroon Relay, which swam 1:21.28, included a 20.12 split from incoming Spanish freshman Carles Coll Marti, and a 19.91 anchor from the team’s top sprinter Thomas Hallock.

With leadoff leg Blake Manoff splitting 20.53 and Will Koeppen swimming 20.72, that was enough to hold of Orange’s top relay, even with a pair of 20.14 splits for the later team on the end.

His other event at the ACC Championships was the 50 free, where he swam 20.55 and finished well out of the points. While he’s capable of much faster than that (and was much faster than that on a relay leadoff at ACCs), his 100 back swim on Saturday might push him more toward that day 3 double.

Among the other noteworthy swims was a win in the 200 back from sophomore Forest Webb of the Orange Team, topping his Orange teammate Samuel Tornqvist 1:48.41 to 1:50.05. At last season’s ACC Championships, Webb finished 9th and Tornqvist 3rd.

This makes me happy! Glad to see this 🙂 Go Hokies!

Blake Manoff somehow is getting younger each year…listed as a 17 year old!