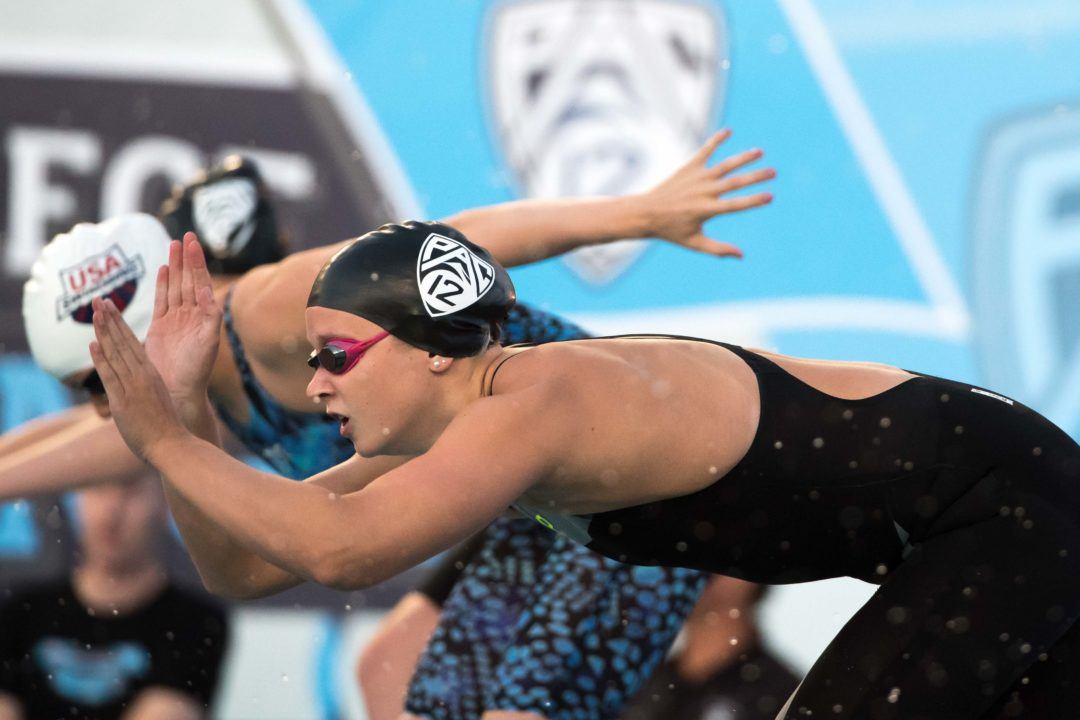 After a wave of graduations swept five of eight 2017 NCAA finalists out of the 100 breaststroke pool for 2018, underclassmen, including Finland's Arizona State swimmer Silja Kansakoski (pictured) have stepped right into the open lanes. Current photo via Mike Lewis/Ola Vista Photography

Among this weekend trifecta of big pre-Thanksgiving invitationals (the Georgia Tech Fall Invite, the Art Adamson Invitational, and the Purdue Invite) the women’s 100 breaststrokers of the NCAA have thrown down fast early-season swims. In an event where five of the top eight (and eight of the top 16) swimmers at last season’s NCAA Championships were seniors, a new group of breaststrokers are stepping in to fill the holes left by the now-graduated Andrea Cottrell and company.

In an event relatively unaffected by the plague of injuries and absences down the NCAA roster in the fall of 2017, it’s uplifting to see the women’s 100 breaststrokers stepping up to the plate pre-Thanksgiving. Though no swimmer has hit the NCAA ‘A’ mark of 58.85 so far this season, 10 swimmers have come in under the the time it took to get invited to NCAAs last year.

The fastest swimmer of the year so far has been Finland’s Arizona State sophomore Silja Kansakoski, who went 58.96 to win the event at this weekend’s Art Adamson Invitational. Lilly King of Indiana is a close second with 59.12 from this weekend’s Purdue Invite, and Texas A&M’s Jorie Caneta is third, with 59.21 from Art Adamson.

So far this season, 11 swimmers are under the 1:00.34 that it took to get invited to the 2017 NCAA Championships, though no swimmers have made the A standard 58.35. Other swimmers under the mark are last season’s Florida State success story Natalie Pierce, Hawaii’s Franziska Weidner, Texas A&M’s Bethany Galat, USC’s Riley Scott, Texas A&M’s Anna Belousova, Alabama’s Justine Macfarlane, USC’s freshman all-star Maggie Aroesty, and Rice’s Marie-Claire Schillinger.

Outside of A&M’s Caneta, USC’s Scott, and Indiana’s King, this is an entirely separate group from the top 10 at this point last year. Comparing the two lists shows that the NCAA swimmers are up to the challenge of replacing the graduated swimmers.

The other apparent difference between 2016 and 2017 is King’s early-season performance. In November 2016, King went 57.30 at the College Challenge to come within half a second of the then-American record. At this point in the 2017-2018 season, King is about a second and a half off where she was last year. Indiana’s only short course meet remaining this semester is a dual against Arizona State December 20th.

Better watch out for A&M in this event. Appears that 3 of the top 10 times were posted by Texas A&M. Just sayin!

USA College Challenge is a meet where people go really fast, especially on the conference side (which King was last year). I don’t think we should be worried.

Supposedly King didn’t wear a racing suit in her individual races so she is still the clear favorite in the 100. I think the 200, there might be logical choices for an upset!