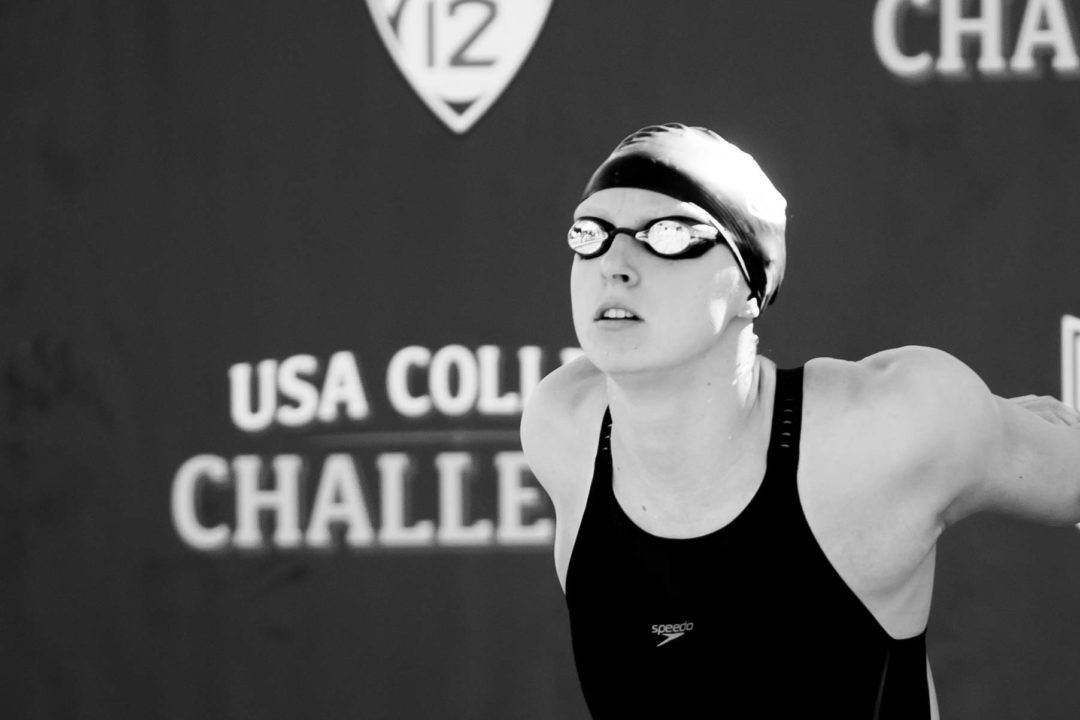 While Katie Ledecky shied away from swimming the 400 IM at her first NCAA Championship in March, instead focusing on the more predictable 200-500-1650 freestyle event lineup, she’s proven that, at least in short course yards, she might be the best 400 IM’er in the NCAA.

The latest data point was her 3:59.69 on Friday at the Art Adamson Invitational. That’s the 19th-best time in NCAA history in the event, and the second-fastest mid-season yards swim ever behind Katinka Hosszu’s 3:58.86 at the 2011 Texas Hall of Fame Invitational. Hosszu is now the fastest-ever 400 IM’er in both yards and long course meters.

On Friday, Ledecky out-raced her junior teammate Ella Eastin, who is the two-time defending champion and American Record holder. Ledecky held that American Record via swim at Pac-12s last year where she swam 3:57.68 (which remains the 3rd-fastest swim ever). Eastin then broke that record at NCAAs.

With Ledecky just tying Louisville’s Mallory Comerford for gold in the 200 free, and Comerford appearing as a freight-train who is forcing her way into superstardom, Ledecky will have a decision to make – risk going after the 200 free again, or swim the 400 IM where she’ll be challenging her teammate Eastin (and freshman Brooke Forde, for that matter) for spots atop the table.

While Stanford should run away with the team title regardless, the Ledecky-Eastin conflict is similar to the Ledecky-Manuel conflict in the 200 free (if Manuel is healthy), and shifting Ledecky to the 400 IM probably reduces the likelihood of winning both events at NCAAs.

Correction…. Katinka Hosszu is NOT the fastest in short course meters. Belmont Garcia broke the world record in the World Cup this year … 4:18

Thought I heard a “Go BB” at the beginning of that video. That’s Galat’s nickname, in case anyone was wondering.

Ledecky’s free and turns look good, but her other 3 strokes look like they could improve. Imagine what she could do if she focused on this event.

Ledecky had really good turns and caught Eastin on her turns. Forde also had awesome freestyle to catch Galat at the end after being behind during Breaststroke.

2
0
Reply
Caeleb Dressel Will Get 7 golds in Tokyo

I wonder what ledecky could go in 200 fly. Seems like that’s her second best stroke

I’m guessing 1:53ish- maybe even faster. She was out in a 54.7 for her IM. Katie Drabot was out in the same this morning in the 200 fly prelims and swam 1:52.9. No doubt in my mind that if Ledecky trained for the 200fly she could do well in the event. Perhaps not as well as in her signature events, but she could be very competitive.

Ledecky held that American Record via swim at Pac-12s last year where she swam 3:57.68 (which remains the 3rd-fastest swim ever).

Was it Ledecky or Easton who has the AR?

Eastin does. She broke it at NCAAs.

So the second sentence on the 3rd paragraph is incorrect then…

“Ledecky held that American Record via swim at Pac-12s last year where she swam 3:57.68 (which remains the 3rd-fastest swim ever).”

It should be Easten held the AR, right?

I must be missing something. Ledexky did hold that record. And then it was broken by Eastin later.

Don’t think Ledecky “shied away” from anything last season. She broke American records 9 times and NCAA records 12 times across several events on way to being recognized as the nation’s top female collegiate athlete. She did what was needed for Stanford to go undefeated en route to an NCAA championship. She broke ARs at both PAC 12 and NCAAs. I recall her swimming the 1000 Free at the Cal meet and jumping out of the water to swim the 200 Free literally a minute later, winning both events. She undoubtedly follows her coaches’ requests as to event scheduling.

What a sinking feeling it must be to have Ledecky by only a half body length going into free.