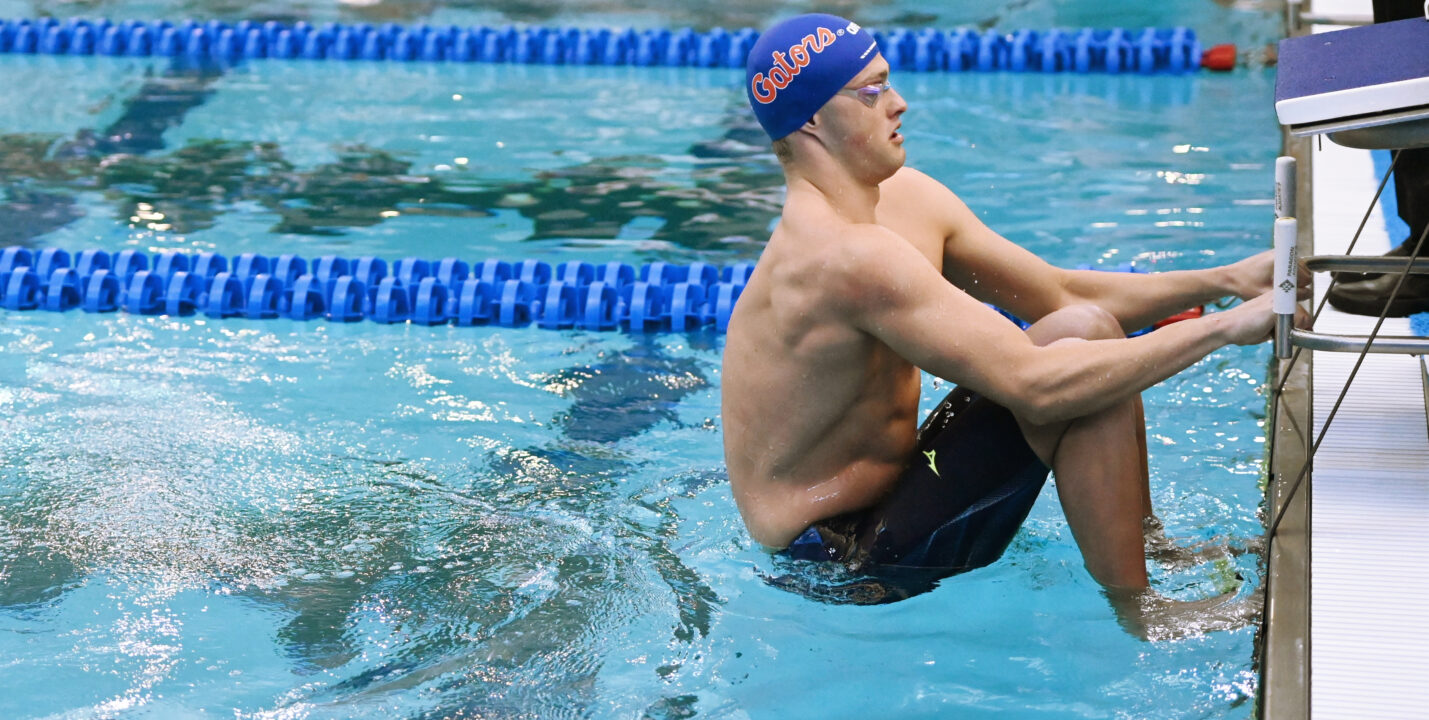 That didn't take long. Florida and Texas swam under the old US Open Record, while Cal and NC State tied in the penultimate heat, for four sub-1:22 swims. Archive photo via NCAA Photos

With the 200 medley relay moving to the opening night, we expected to see some crazy fast times. Sure enough, tonight’s session led to four of the five fastest times ever, led by the Florida Gators at an eye-popping 1:21.13.

All four heats were fast, but we’ll skip to the final heat, where Florida’s Adam Chaney rocketed off to a 20.19 split, which would have broken Ryan Murphy’s all-time record if it hadn’t gone down three minutes earlier (more on that to come). Dillon Hillis split 23.20 on breast, then Eric Friese rocked a 19.36 fly split that ties Joe Schooling for the fastest ever. Will Davis anchored in 18.38, as Florida touched in 1:21.13 to take down Texas’ all-time mark of 1:21.54.

That win didn’t come easy for the Gators, though, as it proved to be a back-and-forth battle with the Texas Longhorns. Freshman Anthony Grimm led off in 20.65, then Caspar Corbeau dropped a 22.55 breast split, which appears to make him the 2nd-fastest ever. Alvin Jiang split a good-but-not-great 20.08 on fly, while Cameron Auchinachie dropped a 18.08, which looks like makes him the 4th-fastest ever. The Longhorns finished in 1:21.36, nearly two-tenths under their old mark.

Two quick notes before we move on. First, neither team broke the American Record of 1:21.88, set by Cal in 2018. Friese is a German national, while Corbeau, although a US citizen, swims for the Netherlands internationally. Second, Florida won this race on the relay exchanges. The Gators’ exchanges totaled 0.27s, while the Longhorns’ totaled 0.72s.

That epic battle came just a few minutes after NC State and Cal dueled it out in the previous heat, with both teams touching in 1:21.69. At that moment, that tied the two schools for the 2nd-fastest performance ever.

It was a battle royale from the start, as Cal’s Bjorn Seeliger led off in 20.08, breaking Ryan Murphy’s 20.20 mark as the fastest-time ever, and NC State’s Kacper Stokowski was also under that time with a 20.16. Cal moved ahead with a 22.71 breast leg from Liam Bell, while NC State got a 23.22 from Rafal Kusto. NC State closed the gap to within 0.02s on fly, as Nyls Korstanje split 19.55 to Trenton Julian‘s 20.12. It came down to the anchor leg. Cal’s Daniel Carr, who’s more often swum back on this relay, but has plenty of freestyle relay experience, went 18.78, while NC State freshman David Curtiss split 18.76, as both teams stopped the clock in 1:21.69.

Here’s a quick glance at the comparative splits between the top four teams tonight and Texas’ time from 2017.

Each of those four schools set their respective conference records. Harvard also shattered the Ivy League record. A 20.36 leadoff leg from Dean Farris propeled the Crimson to a 1:22.42, over a second and a half faster than the previous mark of 1:24.06.

Looks like Hunter Armstrong missed his turn. That’s a shame he would’ve gone 19.

You re literally posting this in every board…..

I don’t think Liam Bell gets enough credit in this relay and I don’t think this relay would be as fast without him.
What can you say about Seeliger’s lead off that hasn’t already been said.
I think Julian vs Rose was the right call here so it can be Rose in the 400 MR.
Carr’s somewhat surprising anchor leg shows just how versatile he’s been for 5 years now.

Cal looked great, 800 FR is probably their weakest and the medley relays were bonkers, they swam fantastic