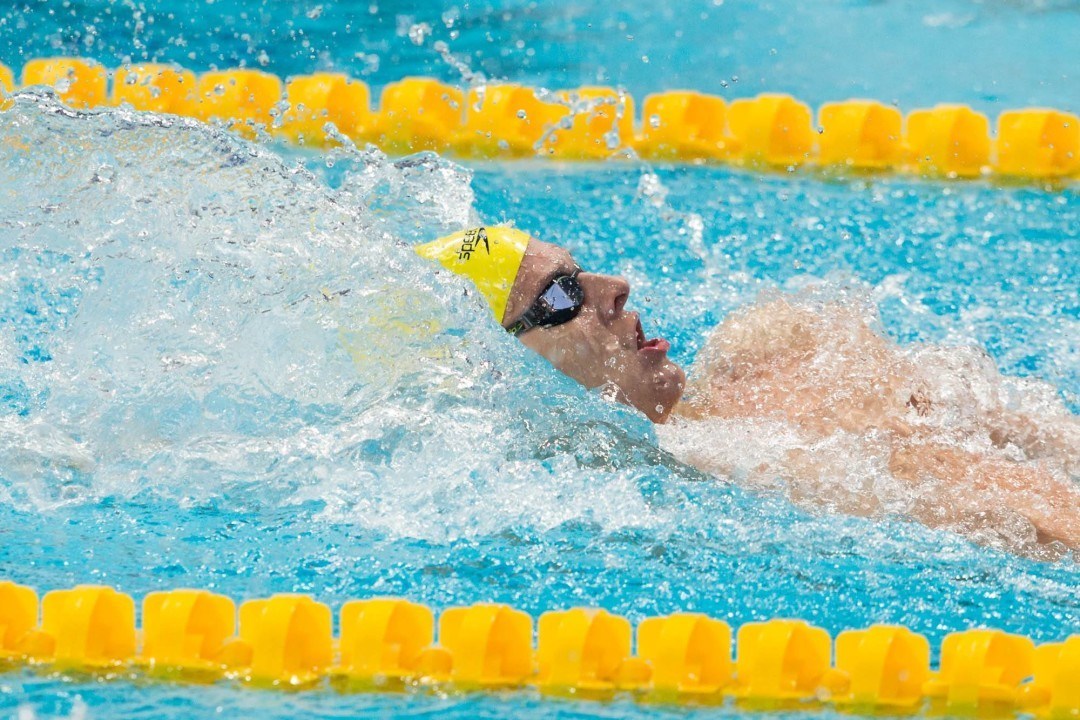 Mitch Larkin convinced his coach to let him swim the 100m and 200m (LC) backstroke races at the Queensland Championships happening this week. Archive photo via Tim Binning/TheSwimPictures.com

The 2015 Queensland Championships are underway at the Brisbane Aquatic Center, with the competition lasting through Friday, December 18th. The Campbell sisters, Emily Seebohm, Cameron McEvoy and Thomas Fraser-Holmes were among the prime time players set to swim at the event, as is double World Champion Mitch Larkin.

Larkin won both the 100 and 200 backstroke races at this 2015 World Championships and scored major wins along the FINA World Cup Series path afterwards. At the Dubai stop of that circuit, Larkin set Australian and Commonwealth records in both the backstroke distances, scoring times swifter than what he produced in Kazan. Additionally, Larkin went on to break the World Record in the 200 backstroke while competing at the Australian Short Course Championships in November.

Flash Forward to the Queensland Championships, where Larkin has decided to try to keep his eye-popping streak going. Originally having entered the long course meters formatted meet in the 100m and 200m backstrokes, as well as the 200 IM, news reported by The Australian was that Larkin was actually only going to swim his two club relays and be done with the meet.

However, Larkin’s coach Michael Bohl has told The Australian that Larkin has convinced his mentor to let him compete in the individual backstroke races after all. Said Bohl of their conversation, “I spoke to Mitch after the relay and he was the one who wanted to swim. I was indifferent, because I think he’s proved himself with all the racing he’s done this year. But he insisted he still felt pretty fresh and wanted to swim.’’

Already in Queensland, Larkin blasted off a 53.07 opening leg of his St. Peter’s Western 400m medley relay, a time which in itself ranks 3rd in the world so far this long course season.

In the prelims of the individual 100 backstroke, Larkin comfortably took the top seed in a mark of 53.26, two full seconds over the rest of the field. Even that prelims mark is only .28 of a second off of retired American swimmer Aaron Peirsol’s All Comers record of 52.98, lending credibility to Larkin’s feeling that he’s indeed ready to keep racing.

Adding to his incentive could very well be the fact that American Matt Grevers blew away the 100 SCM backstroke record just yesterday while competing at the Duel in the Pool in Indianapolis, Indiana. 48.92 is what Grevers threw down to stake his claim among the world as a still completely relevant and present threat in the backstroking field.

Larkin will contest the 100m backstroke final while America sleeps, with the session taking place at 6pm local/3am Eastern.

Pretty good times! The Australian may have taken over the backstroke dominance from the US and they have been pretty consistent especially Seebohm. She is still on the sub-59 streak! Although the US men has more depth with Grevers, Murphy, Plummer and Thoman. Australia will have to rely on Larkin for the prelim and finals of the medley relay and all the backstroke events. For the US women, they could be shut out of the medals in Rio if nobody can go a low 59 or sub 59 consistently, and I can’t think of any name at the moment who can do that consistently. It’s pretty clear that Missy is now better at the freestyle and most likely the 200… Read more »

AUS women’s backstroke IS looking very strong at the present time. Whilst Seebohm and Wilson have to be favoured to grab the 2 100back spots, it will be interesting to see if Atherton can push them. Hocking (59.2 PB & regular sub minute performer prior to injury) is on the return and MAY enter calculations.

Whilst Seebohm almost certainly has one 200back spot nailed down, the 2nd spot looks like it may be a real catfight. Hocking has been a repeat World medallist in this event and has a 2.06low PB; whether she can return to that level remains open to speculation. Baker went to Kazan but failed to make it out of heats. Wilson will feel she made a… Read more »

When Will Magnussen return?

And the same problem of Australia 100 free.. now Mcevoy and Chalmers with really good legs, but the 4th leg seem very below the rest, considering that Mag will return on his old self..

Rafael – Maggie is set to return to competition in January at the Victorian Open Championships http://swimswam.com/jamesmagnussenwillreturntocompetitioninnewyear/

AUS DOES have a reliable 48middish splitter in Abood but essentially everything will revolve around whether Magnussen can return to somewhere near his best. If he does then a quartet of McEvoy, Chalmers, Abood & Magnussen should almost certainly qualify for Rio and probably make the final. Should he not make it, then qualification in itself becomes problematic as there is nobody else who can be seen as remotely reliable.

Australian back looks awesome. Seebohm posting 58s every time she competes. She’s clearly the big favourite for Rio. And there’s also the young talent Minna Atherton. She is only 15, but she can already swim under 1 minute easily.

Whilst it will be interesting see what Larkin may swim tonight; the women’s 100back final may be quite interesting. Madi Wilson swam 59.74 in this morning’s heats with Seebohm a “leisurely” 1.00.29. World Junior’s champ Minna Atherton at 1.01.60 & Sweden’s Michelle Coleman (training at Miami on GC) at 1.02.86 are the other swimmers of interest but it should all be a matter of whether Seebohm continues her sub59 streak and whether Wilson can push her.

Other finals tonight are:

Shouldn’t Grevers’s time from winter nationals be on your list?

It should be ranked 3d i think .