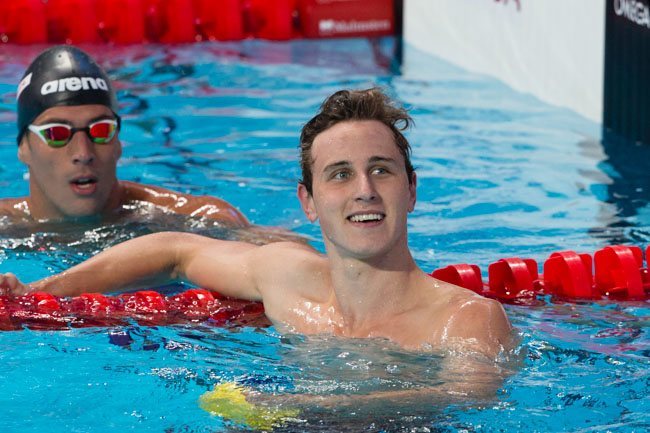 Both Cameron McEvoy and Cate Campbell posted times in the 100 freestyle at the 2015 Queensland Swimming Championships which have them sitting atop of the world rankings... Current photo via Tim Binning/TheSwimPictures.com

Both Cameron McEvoy and Cate Campbell posted times in the 100 freestyle at the 2015 Queensland Swimming Championships which have them sitting atop of the world rankings.

Campbell won the women’s event in a time of 52.84. Coming into the competition Campbell had already held down the top spot in the world rankings after having posted a time of 52.96 to win the Beijing World Cup in September.

She finished well ahead of Emma McKeon who hit the wall in a time of 53.93, which places her sixth in the world rankings.

Emily Seebohm was not able to match her season’s best of 58.34 in the women’s 100 backstroke, but did manage to set a new all comers record winning the event in a time of 58.70. Seebohm beat her own record of 58.84, which she set at the 2014 Pan Pacific Championships.

Jessica Ashwood took the women’s 400 freestyle in a time of 4:06.96. She was followed by Bronte Barratt who recorded a 4:07.15 and Lauren Boyle of New Zealand who finished in a time of 4:08.39. Ashwood’s time places her fourth in the world rankings.

Jake Packard also posted a time in the men’s 100 breaststroke which puts him fourth in the world rankings. Packard won the event in a time of 59.94 finishing over two seconds ahead of the field.

Whilst a pleasing time by Groves; she does come with a warning “domestic performance only”. Whilst not yet “tourist class”, her 2014/2015 international outings have been nowhere near her domestic times. Men’s 200FLY times 2 seconds off AUS QT.

Fullerton’s time is within a second of the AUS QT in an event that has looked bare since Coutts. Lewis was a gold medallist in M200IM at World Juniors but… Read more »

It is great to see Packard going under the 1:00.00, proving that Worlds wasn’t just a one off. Unfortunately there’s no other breaststrokers close to him in the 100m.

McEvoy, Larkin, campbell,Seebohm, Wilson and Chalmers all posted strong times for the end of the year. McEvoy and Larkin in particular have looked great.

I may be wrong, but I think that was the first time Minna Atherton has broken the minute? She was right up there with Wilson & Seebohm.

Re men’s 100BRS, there was certainly zero competition for Packard at this meet. Sprenger remains a “maybe” with regards to returning to anywhere near his previous standard. Sucipto is currently swimming 1.00s but whether he can get below the minute by Trials is open to question.

Santo Condorelli was 48.0 at US Nationals but is not listed in the world rankings.

Commonwombat the text said lifetime best so I am still correct

zing netao? xD that made my day thank you haha