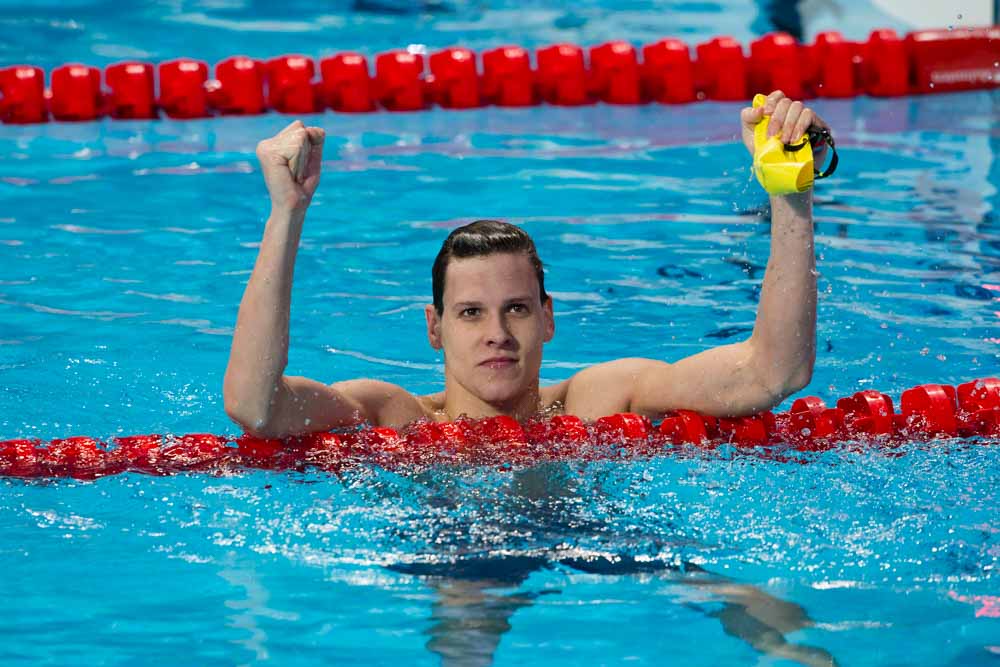 Eight individual world championship medalists will be vying for titles at the Queensland Championships... Current photo via Tim Binning/TheSwimPictures.com

The 2015 McDonald’s Queensland Championships will be held at the Brisbane Aquatic Centre from Saturday December 12th-Friday December 18th. The open events run from the 12th to the 16th while age group events will continue on until the 18th.
There will be six lanes reserved for Queensland swimmers in the open A finals.
The meet will host eight individual world championship medalists and two athletes who broke world records less than two weeks ago in Sydney.
All eyes will be on Mitch Larkin who will be competing in the 100 and 200 backstroke as well as the 200 IM. Since winning both the 100 and 200 backstroke at the 2015 World Championships Larkin has been on what some would call a roll.
He dominated the backstroke events at the FINA World Cup series winning the 100 and 200 events in Tokyo, Doha and Dubai and tying American David Plummer for the 50 backstroke crown in Doha. In Dubai Larkin set Commonwealth records in both the 100 (52.11) and 200 (1:53.17), both faster than his winning times in Kazan.
At the Australian Short Course Championships Larkin broke the world record in the 200 backstroke as well as the Commonwealth record in the 100 backstroke and the Oceanic record in the 50 backstroke.
Cameron McEvoy also had a very successful showing at the Australian Short Course Championships winning the 50, 100 and 200 freestyle. McEvoy set a new all-comers mark in the 50 and a new Australian and all-comers mark in the 200. He will be swimming the 50, 100 and 200 freestyle in Brisbane.
Thomas Fraser-Holmes will be McEvoy’s biggest challenge in the 200 freestyle and will also be challenging for titles in the 200 butterfly, breaststroke and backstroke as well as the 200 and 400 IM.World Championship 100 breaststroke finalist Jake Packard, who won the same event at the short course championships in Sydney, will be competing in the 100 and 200 breaststroke as well as the 100 backstroke and 200 IM.

American Jordan Wilimovsky comes into the competition with the fastest entry time in 1500 freestyle and will also be racing the 200 and 400 freestyle.

Larkin was not the only athlete to set a world record in Sydney. Cate Campbell set a new mark in the 100 freestyle posting a 50.91 in the first 100 half of her 200 freestyle.

The battle for the titles in the women’s distance events will be exciting as both Lauren Boyle of New Zealand and Jessica Ashwood will be competing in both the 400 and 800 freestyle. Both women will also be competing in the 200 freestyle while Boyle is also entered in the 100 freestyle.