With French Sprinting in Peril, Metella Keeps Nation Aloft By a Thread 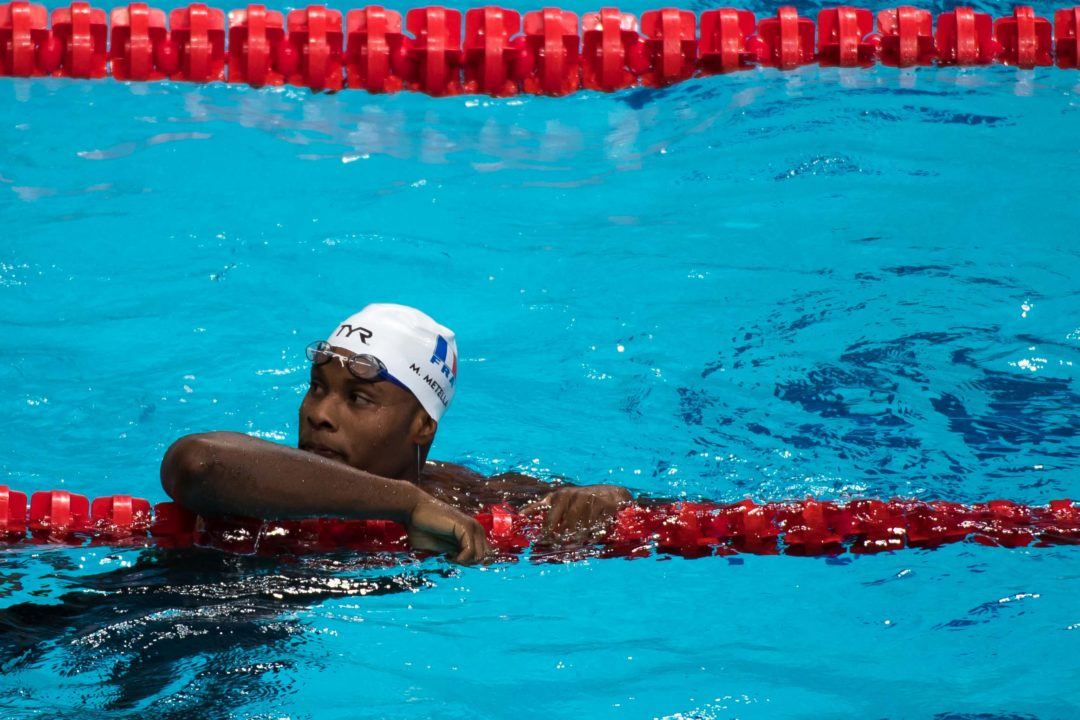 France has always been a sprint machine of a nation, but things looked grim after their Worlds Trials in May. Mehdy Metella was their saving grace, however, earning the 100 free bronze tonight in Budapest. Current photo via Mike Lewis/Ola Vista Photography

The French, who won 2008 Olympic gold in the 100 free and 2012 Olympic gold in the 50 free and 4×100 free relay, have always been a swimming nation built on their sprints, particularly on the men’s side. Nobody will forget the trash talking before the men’s 4×100 free relay in Beijing, which ultimately led to Jason Lezak’s epic comeback at the finish to lift the USA ahead of Alain Bernard and the French.

France resurfaced with a win in the 4×100 free relay in 2012 at the Olympics, then taking golds at the 2013 Worlds, at the 2014 Euros (where they went 1-2 in the 100 and won gold in the 50, individually), and in 2015 at Worlds, where the USA infamously missed the final altogether. In 2016, though, France only managed a 50 free silver thanks to Florent Manaudou, and the Americans took back the throne in the 4×100 free relay with the French in second.

2016 wasn’t a bad year for France, but what followed was anything but good– essentially, the entire 2016 400 free relay caved in, other than Metella.

Manaudou left the sport indefinitely for handball, with little clarity about if and when he’d be back to swimming. Fabien Gilot retired, while Clement Mignon was fairly slow at French Trials this spring (49.0) and missed the team. Jeremy Stravius injured his hand this past winter, and he hasn’t looked his best since; plus, he’s only swimming the 50 back this week. The French did not even enter a 4×100 free relay at Worlds this year, which is shocking considering their heavy sprint tradition in recent swimming history.

That left Mehdy Metella as the lone ranger for French sprint freestyle this week in Budapest, one of just four men on their Worlds roster. Despite the general swimming scene looking pretty bleak for the French, Metella swam two of the best swims of his entire life, first getting under 48 in the 100 free semifinals to take the top seed going into the final. His 47.65 from semis was a lifetime best and his first sub-48 swim ever. By no means did he come in to Budapest as a gold medal favorite, but suddenly he had a great shot at the top of the podium.

Metella carried that momentum into the final, and it was clear from the looks of his race that he would be on the medal stand at the finish. He was just as sharp as he was in the semifinals, utilizing fantastic underwaters and executing another great race, finishing in 47.89 for bronze behind Nathan Adrian (47.87). While bronze might not seem like much to a country of France’s standard, this was a very significant finish for Metella and his nation. He raced against a stacked field, notably beating Cameron McEvoy, the Australian with the textile WR, along with Brazilian Marcelo Chierighini, who had the 4×100 free relay’s field-best 46.85 split. More importantly, he earned a medal in sprint free, which might be France’s only medal in pool swimming at this meet.

Metella still has the 100 fly left to contest, which is his best event. He’s already proved something, though, in the 100. Though France will need to do a lot of restructuring of their national team if they’re going to make a mark in Tokyo 2020, Metella performed better than expected tonight. The French hold on to their sprint tradition, if only by a thread.

In other European swim news, Mireia Belmonte successfully took home the 200 fly gold after winning the Olympic gold last summer. She sets herself up for more likely medals in the 800 free and 400 IM. Katinka Hosszu earned another medal for the host nation, taking a somewhat unexpected bronze in that 200 fly, one of her weakest events on her schedule. Also getting a bronze was Aliaksandra Herasimenia of Belarus, who tied the European record in the 50 back at 27.23. In the 200 breast semifinals, Anton Chupkov took down the European record in the 200 breast, setting himself up for a potential gold tomorrow night.

Dude, “in peril”? Sometimes this happens due to a cycle of talent, not necessarily because of the program. I’m sure there will be faster French swimmers in the coming years leading up to Tokyo. If not, the sprinters may want to start doing coke again like the 2008-2012 squad lol

Yeah, the French program has collapsed.

Maybe LaCourt can get a medal in the 50 back before he disappears too.