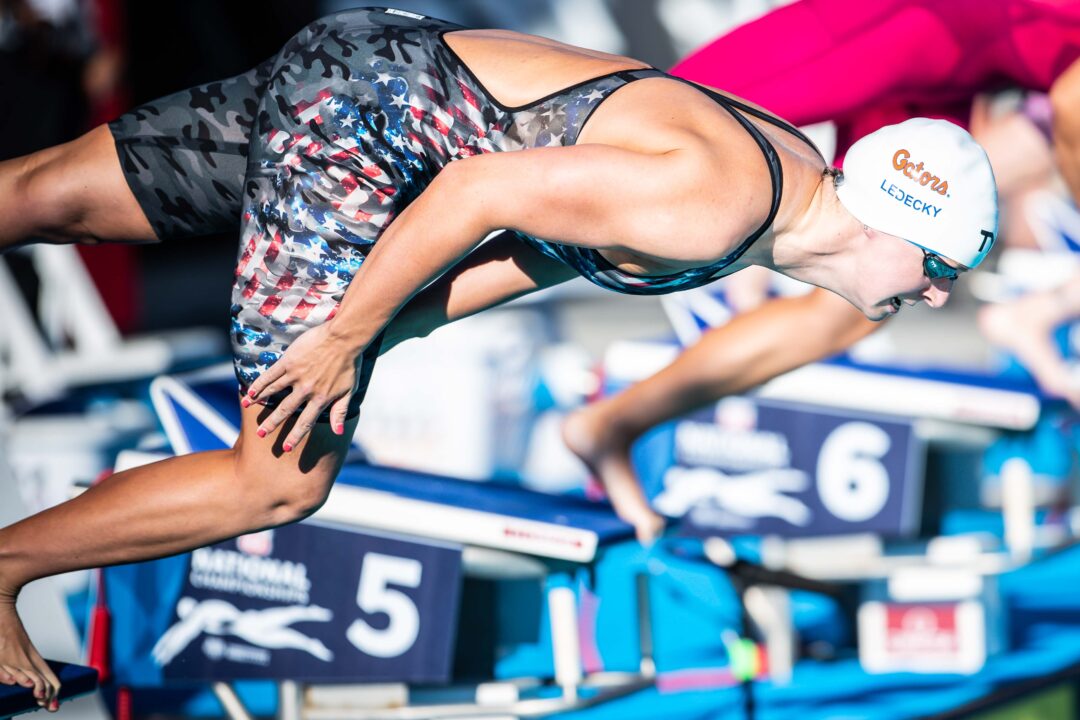 Katie Ledecky has a top 5 performance of the season in five different events, the most of any swimmer on the men's or women's side. Archive photo via Jack Spitser/Spitser Photography

With the 2022 European Championships over, the senior long course international championship season has concluded after a packed summer schedule. Given how busy the summer was, we’re taking a look at where the top 5 times of the year were swum in each long course event.

With a schedule that included Worlds, Commonwealth Games, and Euros for some, where did swimmers choose to focus? And yes, we realize that doing this before the world junior championships is tempting fate, or more accurately, tempting David Popovici to drop another blistering time. But that’s a risk we’ll gladly take.

If you want to check out the spreadsheet of the full top 5 performers for men and women this season, scroll to the bottom of the page. The chart is current as of August 20, 2022.

Katie Ledecky leads the women with 5 individual performances on the chart. She owns the season’s top performance in the 800 and 1500 freestyles from her times at Worlds. She posted the second-fastest time in the 400 free, fourth in the 400 IM, and fifth in the 200 freestyle. The latter two she swam at U.S. Nationals, as she didn’t swim either event individually in Budapest.

While Ledecky’s events highlight her dominance in freestyle from the 200 up, Foster’s and Casas’ showcase their versatility. Their entries on the top 5 chart each come in three different disciplines.

Pulling the data from the chart, the distribution where the top times of the year were swum looks like the table below. Note that while there would typically be 170 swims, there are 173 because there were three ties, and we counted each of those swims individually.

There were two ties on the men’s side: Nicolo Martinenghi clocked 58.26 in the 100 breast twice, at Worlds and then at Euros. Thomas Ceccon and Michael Andrew also both went 22.79 in the men’s 50 fly, tying for the fifth-fastest performance.

On the women’s side, Torri Huske and Farida Osman also tied for fifth place in the 50 fly, swimming 25.38.

Worlds was the biggest producer of the season’s top performances by far, with about 40% being swum in Budapest. It was a much faster meet for the men than the women though. This discrepancy is likely because two of Australia’s biggest female superstars, Emma McKeon and Ariarne Titmus, bypassed Worlds in favor of the Commonwealth Games. That’s reflected in the chart, with Commonwealth Games responsible for 10 of the year’s fastest performances by women. That makes it the third highest producer of women’s top performances, behind Worlds and U.S. Trials.

Overall, U.S. Trials had 21 of the Top 5 swims of the year, the second-most, which reflects how competitive it was for American swimmers to make the Worlds team. Also contributing to that stat is Caeleb Dressel‘s early departure from Worlds, which meant that except for the 50 butterfly, his times from that meet stand as his season-bests.

Despite Worlds being the meet where most of these times were swum, there are still seven events where none of the top 5 times were done in Budapest. They are:

Notably, this list skews much more towards the women’s events, which is highlighted by the fact that none of the fastest performances in the women’s breaststroke came at Worlds.

So, what does that mean? Did swimmers miss their tapers? Were they focusing on another meet, like Commonwealth Games or European Championships?

It’s a combination of many factors; Lilly King was sick at Worlds, Tatjana Schoenmaker swam at Commonwealth Games, and Ruta Meilutyte was faster in the 50 breaststroke at Europeans, where she set her first personal best in the event in nine years. However, it is interesting that 1/5 of the top times weren’t swum at a championship or a qualification meet.

On the flip side, there is one event where all five times were swum in Budapest, the men’s 100 backstroke. Thomas Ceccon broke the world record in the final, and the entire podium was under 52 seconds. Even without the Russian duo of Evgeny Rylov and Kliment Kolesnikov, the field was incredibly fast, setting up a dogfight for the medals for the next few years.

Does the pattern stay the same though, when we’re talking solely about the fastest performances of the year?

Worlds still had the most top performances of the year for both men and women.

The chart also illustrates the pattern of men’s top times being concentrated at Worlds, while women’s top times of the year come from twice as many meets.

Dressel’s Worlds withdrawal continues to inflate the U.S. Trials count on the men’s side, however, the Australian women don’t have the same effect on the Commonwealth Games when solely focusing on the fastest times. In fact, the one top performance done at the Commonwealth Games doesn’t belong to an Australian, it’s Summer McIntosh‘s 4:29.01 400 IM.

Note that despite his early departure at WC in June, Dressel is the only swimmer, male or female, to have the best time in three events.

If all these times happened at the same meet, the U.S. would top the medal table with (by my count) 37 medals, 12 of them gold. Australia would be second, with sixteen total and 6 gold. Italy, France, and Russia all have 5 total medals but Italy would be third given that 4 of their medals would be gold, which is more than the other 2.

Euros has 1 World Record in men’s 100 free. So, not just from World, Aus Trials and US Trials stated in the last paragraph.

Without going through the data included, where are new WJR being swam?

National games? What meet is that? Had 8 on the womens side.

Okay posted too quick the answer was in the spreadsheet. It was a Chinese meet