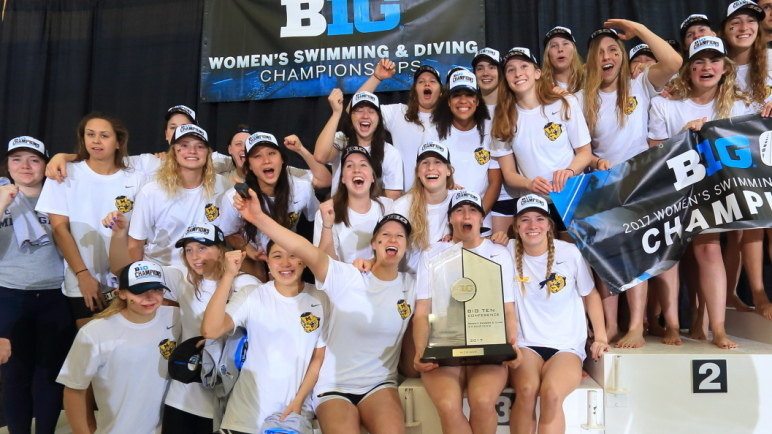 We floated an idea to score NCAA championships to 24 places earlier this month. Several depth-based teams, such as Indiana’s... Current photo via Walt Middleton Photography

We floated an idea to score NCAA championships to 24 places earlier this month. Several depth-based teams, such as Indiana’s women’s squad recently upset Michigan’s team that should fare far better . While the majority (60%) of SwimSwam readers opposed the idea, it did have some significant support.

Right now, college swimming has basically three formats which can favor different types of teams: dual meets, which the CSCAA ranks in their strength rankings; conference championships, some of which are scored to 24 places such as Big 10s; and NCAA nationals, which is scored to 16 places. The idea was that in scoring to 24 places, teams that were capable of winning power championships in the power five conferences would

To give an idea of what differences scoring NCAA championships to 24 place would make, we re-scored last year’s NCAA DI Men’s and Women’s championships. Shown below is the re-scored 2018 NCAAs along with the team’s previous scores and the previous places and the change in place for that team.

As it turns out, the top teams are basically the same. Where more of the differences lie are in the middle-tier teams. There is huge gap between placing top five at NCAAs and placing in the 25-5 range. A team can sneak into the top 10 at NCAAs with 4-5 really fast swimmers and a few relays that can make finals. But any team with a realistic shot at winning nationals will have at least 10-15 swimmers all scoring individually, which is really hard! So those teams benefit relatively little from having an additional eight swimmers score. Florida St. for example, the 42nd place team at Women’s NCAAs in 2018 moved up 19 spots scoring 24 deep since they had quite a few swimmers and divers right on the cusp of scoring. However, the overall change in terms of finishing position for most teams is relatively minor.

Changing the scoring would have made one big difference on the men’s side: it would have given Cal the title over Texas. This is just as easily described as Cal missing an opportunity in a 12-point meet that was historically close.

Also interesting was that scoring 24 vs. 16 places wouldn’t make a big difference in some of the conference championships that were referenced as motivation for the change. If you re-score 2019 Big Ten Women’s championships to 16 places, Indiana is still the victor over Michigan, this time 1220 to 1159.

Changing nationals to score to 24 places might have some benefits, but it doesn’t look like benefiting depth-heavy teams is one of them. Perhaps its best that NCAA swimming keeps its different formats – swimming tends to be a sport where the underdogs don’t often win – so a few different scoring formats give more teams a chance to shine.

Long overdue and a no brainer. Helps the sport. Do it.

2 points to make:
1) Dang Virginia men get a big boost with that…. up 11 spots?!? Next biggest boost is OSU with 7, then its 1… .so you would have to add the 4 next biggest boosts to get to where Virginia would be, that’s crazy. On the women’s side there is more of that with FSU getting 18 spots of a boost.
2) Adding a C heat would give more time between swim swims for those studs who can swim 2 events in the same day… like the 100 back/fly double, or the 200back/fly double (I know there are more, but those seem to be the most common) and give more rest for those who swim… Read more »

ONLY if the NCAA D1 meet is combined AND another day is added should it score to 24.
If the meet stays SEGREGATED as it is now – stick with 8/8 or get back to 6/6.
Divers MUST count as a whole person.
Limit TEAM SIZE at NCAAS and OFFICIAL SCORERS at conference to 12. Then we would have VERY competitive meets.
Have a NATIONAL COACH of the YEAR AWARD named the EDDIE REESE TROPHY…he deserves that long lasting honor.

Lowering the team cap is a great idea. This could result in more movement at the top and open up the chance for smaller teams to move into the top ten.

In all three divisions there are 12 or so teams that will make up the top 10 any given year. Wouldn’t it be fun for the sport to encourage more mobility at the top?

It may also encourage more swimmers to look seriously at other schools. When UT or Cal, qualify 16-20 swimmers how many of them would consider Mizzu, TA&M, or other 10-20th ranked school because they have a higher likelihood of being on the championship roster.

Sir this is Wendy’s

Here’s some data
Close to exact, just eyeballed and took down notes off meet mobile results:

I’d estimate that 7-8 more schools in 2018 translates into 15-20 more schools over the next 5 years per gender. Wouldn’t that be a good thing? I’d think 7-8 more AD’s and SA’s would like to hear that this time of year.

would scoring 24 make coach to think all of his/her swimmer, with 16 you can ride few gems and kick rest to curb….

I don’t follow this question as all individually invited swimmers are paid for by the NCAA (does not apply to all the divers). I also have a hard time thinking a coach would leave an uninjured, hard-working swimmer at home and not bring them to the National Championships.

Very few schools in very few years ever have this problem.

The reason I suggest adding swimmers is that bringing 30 per event and scoring 24 seems a little too “gimme”.

That would be interesting – who wouldn’t want to see a Lochte/Dressel/Conger/Vazaios or Coughlin/Ledecky/Eastin/Regan swim another event?

D2 is also a combined meet over 4 full days

Combine the 2 meets and go 10 Lanes for finals/consoles would be awesome.

Even though the D2 meet is 4 days and athletes can do an extra individual event, they’re still limited to 7 total. Coaches have to weigh the option of extra individual points vs how far the relay will fall without said athlete on there.

It’s really hard to score 24 if most events only invite 28-30. That said, making the meet is hard, so maybe it should be rewarded??

I think I’d be in favor of an approach like this—more places for points = need for mor fast swimmers! I think we see the benefits, especially at the conference level. But it won’t really change the outcome of the big meet unless more swimmers/divers are invited. If you add 10-12 per event??!! Oh my. The NCAA qualifying and the meet itself becomes way more interesting— who is rested and shaved to get top40 or 50 really matters. Then. Swimming version of March madness maybe?? I’d vote yes for anything that gives us that!

Sounds good to have more people at the meet, but the number is calculated on specific premises (that I do not know on top of my head). Over the last 5-10 years NCAA basketball for men have added teams to the playoffs so maybe swimming can as well but I don’t see them add 10-12, maybe 2-5 (26-65 more swimmers or an increase by 10% – 24% increase in numbers on the men side).

The odds of the NCAA being willing to add more qualifiers while the number of programs is decreasing are not good.

I’d agree in that the first couple of years they would not add more athletes. Adding a C final gives more swims to athletes already there.

The 28-30 is just the invited swimmers. There are plenty of entrants in each event now when you look at all “b” cut events.

If you score more places you need to invite more swimmers