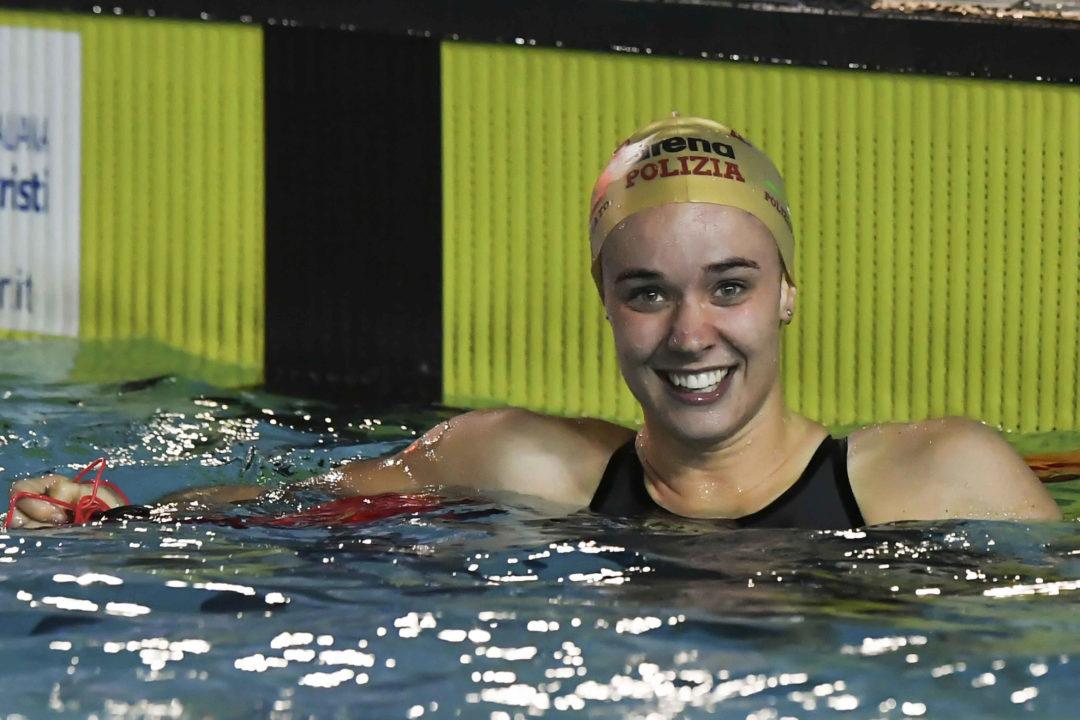 Day 2 of the Open Absoluto Invierno Comunidad de Madrid saw Italian Matteo Ciampi snag the win in the men’s 200m freestyle. After establishing himself as the man to beat with a morning effort of 1:50.73, the 22-year-old scored the only sub-1:50 time of the night, taking gold in 1:48.14.

His effort this evening checks-in as the young man’s personal best, beating out his 1:48.70 mark from last year’s Mediterranean Games. Ciampi has been emerging as a valuable member of Italy’s 4x200m freestyle relay arsenal, having helped his nation take the bronze in Glasgow last year at the European Championships. His split there was a speedy 1:46.49.

Barbora Seemanova of the Czech Republic nailed the winning mark in the women’s 100m freestyle tonight, logging a time of 54.92. She scored the only time of the field under the 55 second threshold, with Italy’s Silvia Di Pietro earning silver in 55.42, while Galici Giada took bronze in 55.53.

Seemanova is the reigning Youth Olympic Games gold medalist in this 100m free event, having clocked a time of 54.19, her lifetime best, to stand atop the podium in Buenos Aires last year.

Margherita Panziera staked her claim on the women’s 100m backstroke event this morning, clinching the fastest time by 3 seconds with her AM swim of 1:00.57. The 23-year-old European champion in the 200m back dropped just short of half a second this evening to stand atop the podium in a wining effort of 1:00.18.

Her time tonight slides Panziera into the world rankings at #7.

Russian Evegny Rylov powered his way to the 100m freestyle victory last night in a time of 48.86 and he doubled up on that gold with another feat this evening. Rylov hit the wall in a tie of 25.42 to claim the top prize in the 50m backstroke, falling just shy of his season-best of 25.29 produced last weekend in Barcelona.

There was a trio of sub-27 second women’s 50m flyers tonight led by Russia’s Svetlana Chimrova. The Volgan Region Club athlete fired off a winning time of 26.77 to beat out Italian Elena Di Liddo by .11.

Di Liddo produced 26.88 for silver, while her teammate Di Pietro stopping the clock just .03 later in 26.91 for bronze. 2 of the 3 women produced their season-best results in the race, while Di Liddo had been slightly faster this season with the 26.61 earned at the Euro Meet this past January.