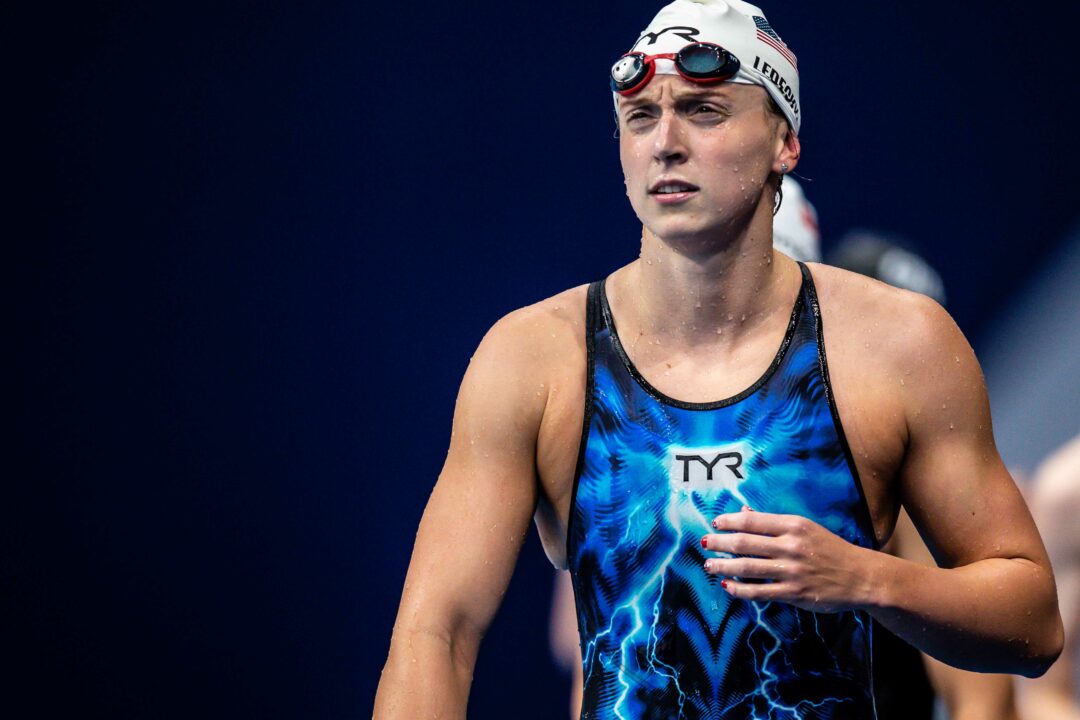 How fast would Katie Ledecky be in a super suit? We try to answer that question. Archive photo via Jack Spitser/Spitser Photography

This article originally appeared in the 2021 Year In Review edition of SwimSwam Magazine. Subscribe here.

Do you remember high-technology swimsuits? Since it’s been almost 12 years since they were banned from swimming, they are becoming a distant memory.

But they made a huge impact between 2008 and 2009, since they were used by almost every elite swimmer in that period and were instrumental in breaking several world records. Some of these records still stand today, such as Cesar Cielo’s 50 and 100 freestyle, Michael Phelps’ 400 IM, and Federica Pellegrini’s 200 freestyle.

The effect of the suits is undeniable. But what if the swimmers were still allowed to use them? How fast would their times be?

The legacy of the suits

In 2008, Speedo launched the LZR Racer suit, adding polyurethane panels to its existing design, and replacing the Teflon coating used in previous models. The more polyurethane the suits had, the less drag they created. The result was 55 world records were broken in that year in long course meters — 25 of those during the Beijing Olympics.

In 2009, other manufacturers like Jaked and Arena went further and made their suits entirely with polyurethane, allowing the swimmers to glide through water even faster. Sixty-seven world records were broken that year in long course meters — 43 at the World Championships in Rome — the most ever.

In the beginning of 2010, FINA banned those suits for good. Now, swimsuits have to be made with only textile material, no polyurethane.

But swimming has evolved, and most of the world records set in high-tech suits have already been surpassed. From the 34 individual events officially recognized by FINA, 25 have seen world records set from 2010 on.

In SwimSwam Magazine Issue 23, we brought the article “What if the super suits had never existed?” We tried to answer questions like: If the swimmers were not using technology suits in 2008-2009, what would their times be? How many world records from that period would still stand?

Now, we go in the opposite direction. What if the super suits had not been banned in 2010? How fast would active swimmers be? Certainly, we would have some very fast times. Using statistical analysis, we can have an idea of this hypothetical scenario. And, in fact, we would be witnessing some pretty amazing performances.

Let’s take a look at the evolution of the men’s 100 freestyle. The graph below shows the average time of the fastest 100 swimmers in each year since 1990.

The decreasing pattern is evident, as we would expect, but there is another interesting aspect.

Every four years, there was a dramatic drop in the average time. This is not coincidental, since it corresponds to the Olympic years. The only exception is the period 2008-2009: The times decrease from 2007 to 2008 and decrease even more from 2008 to 2009, which is unusual since 2009 was not an Olympic year. Of course, the super suits were the cause.

In a statistical perspective, we can estimate the decreasing trend over the years and the seasonal effect every four years using data from 1990-2007, and 2010 on, to estimate the time from the 2008-2009 period in “normal” conditions — in other words, without super suits.

For example, Cesar Cielo’s 100 free world record from 2009 is 46.91, but his estimated time without the suit is 47.78, because the average gain due to the suit is estimated as 0.87. This way, we can estimate the effects of the high-tech suits in each event.

The statistical model is called ARIMA (Autoregressive Integrated Moving Average), one of the most used models to adjust time series data.

Since the 2009 suits were faster than the 2008 suits, different effects were considered for each one of those years. In the men’s events, there were swimmers who preferred to use only the leg suit, and others used the full body suit. A very careful data analysis was conducted to estimate the percentage of swimmers who used each type of suit in each event, using data from the major competitions.

In this analysis, we consider that if the swimmers could use those super suits today, they would choose the fastest ones available — the full body suits from 2009, made entirely with polyurethane.

It is important to notice that we are only able to calculate the average effect of the suits. The suits’ effects could vary from swimmer to swimmer, and the individual effect is impossible to measure without a designed experiment.

The following tables show what the world records would be if the suits were allowed today.

Interestingly, two of the world records by Chinese swimmers set in 2009 would stand today (men’s 800 freestyle by Zhang Lin and women’s 200 butterfly by Liu Zige), as no one after that has come close enough to hypothetically swim faster than those times even when wearing the super suits.

And then there is Michael Phelps’ case. In 2008, he set the men’s 400 IM record wearing a Speedo LZR leg suit. If he wore the full polyurethane suits available in 2009, he could conceivably break the 4-minute barrier.

As long as those “new” world records seem too fast to be real even in a super suit, remember that back in 2009, the swimmers set astonishing performances that were way ahead of their time. The effects of the suits were huge.

No one will beat Liu Zige’s doped record even if they bring back super suits. An analysis was done of today’s fastest times adjusted to be faster with the help of super suits. Not even close.

It is interesting to note that women benefited from this era the most as they “gained “ the knee length suits you see today.

Great thought provoking and fun article. Just confirms for me what a disaster the supersuits were for swimming. An aberration.
I really feel for the generation of swimmers who missed out on world records in the following decade.
Yes some of the same swimmers would have broken/ held the records without a supersuit- albeit at a slower time- but there must be many swimmers from 2010 onwards who reverted to textile, swam faster than the old textile WR but not as fast as the assisted/ supersuited, and were thus cheated of a world record. Any chance your analysis people could look into that and give these ‘cheated’ swimmers some recognition??

This is a very fun/interesting article. I think the fact that the W200fly and M800fr stay the same is very telling as to how incredible those are. Overall I am still staunchly anti-super-suit and hope they never come back. I remember competing in high school at that time and the talk of the pool deck was all about the damn suits. Everyone asking what suit everyone else was wearing. Complaining that some team had a rich parent gift everyone Blue70s. So much less focus on the actual swimming. As a fan today I really hope it doesn’t come back again. That said if the day after WCs or OGs, some stars who were still in taper mode wanted to throw… Read more »

Clearly not scientific method. The urethane body suits affect times in different events at different levels. Swimmers wore different suit configurations in the events cited. MP wore leggings in the 400IM in Beijing. Sprint freestyle and breaststroke events have the greatest benefit and distance freestyle the least. It’s not valid to interpolate the 400 freestyle times from the 100 freestyle delta. Apples and oranges. A more valid analysis and projection would look at the suit delta for each event individually across a large number of performances.

This benefit of the super suits in not buoyancy but drag reduction (which helps sprinters ride higher). Drag increases exponentially with velocity, so the greatest benefit is at the highest speed. Buoyancy is… Read more »

Ariarne is the WR holder in the 400 not Katie

And Pellegrini is the 200 free WR holder. It’s an old article apparently, but still.

It seems like they took the textile WR (in this case Titmus) and applied the ‘suit’ calculation to see what that time would be. Since Titmus’s time is only a tenth off Pellegrini’s, it’d obviously be faster, while in cases of congruent records like Zhang Lin and Liu Zige, I’d guess their records are faster than the textile WR even after the calculated adjustments

Yes but that was done in a supersuit

Gheko, this is an old article before the recent trials.

Should have kept the suits… made them faster. Great for Phelps to have the 2008 experience, but to complain about them afterwards was ridiculous. Like the guys and what he did for the sport, but complaining about the suits when guys started beating you was a major setback.