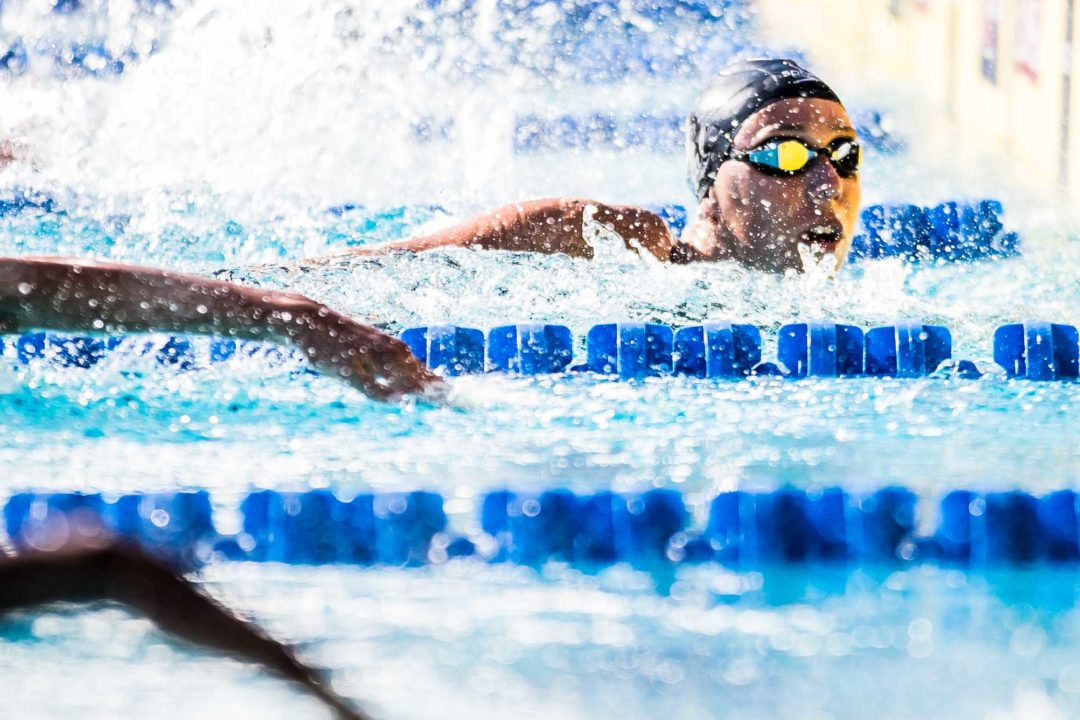 Weitzeil set a new Pool Record and Cal Dual Meet Record in the 50 free, while teammate Isabel Ivey won all 3 of her individual races. Archive photo via Jack Spitser/Spitser Photography

After beating Arizona on Friday, the Cal women were dominant again against Pac-12 rival Arizona State on Saturday. NCAA Champion Abbey Weitzeil, who set a Cal Dual Meet and Pool Record in the 100 free Friday, has another successful showing on senior day.

Weitzeil had the fastest relay splits of the meet, starting with a 21.65 anchor on the 200 medley relay to turn a 4-tenth lead over ASU into a win by over a second. In the 400 free relay, she brought the Bears’ A relay from 2 seconds behind to beat the B relay with her 46.98 anchor.

BERKELEY – Senior Abbey Weitzeil smashed the pool record in the 50-yard freestyle as the Golden Bears closed out their home schedule with a 192.5-97.5 victory over Arizona State Saturday at Spieker Aquatics Complex.

Weitzeil hit the wall in 21.73 seconds in the 50 free to lower her own Cal dual-meet and pool mark of 21.92 set last year. The result gave her two pool records in as many days after she covered the 100 free in 47.79 vs. Arizona on Friday.

“To be honest, I’m not really sure what the records were before I swam,” Weitzeil said. “I kind of just go for racing. I have my own personal best times in my head, so having the pool record and to leave my mark like that is pretty cool.”

In addition to her 50 free, Weitzeil cruised to a convincing win in the 200 free with a time of 1:44.88, while she also anchored both the 200 medley relay and 400 free relay to victories.

Cal’s other individual swimming winner was sophomore Alicia Wilson, who claimed the 400 individual medley with an impressive 4:13.89 for a nearly nine-second gap over runner-up and teammate Sarah Darcel (4:22.37).

The Bears wrapped up the day when an all-senior squad of Aislinn Light, Keaton Blovad, Maddie Murphy and Weitzeil captured the 400 free relay in 3:20.29. Weitzeil’s 46.98 split brought the foursome back from two seconds down over the final 100 yards.

The meet marked the final home appearance for six seniors – Light, Blovad, Murphy and Weitzeil, as well as Alexa Buckley and Courtney Mykkanen.

Cal returns to action next weekend when the Bears visit USC and UCLA. The team then has one last Bay Area meet when Cal travels to Stanford on Saturday, Feb. 15.

BERKELEY, Calif. – No. 13/NR Sun Devil men’s and women’s swimming and diving finished up their Bay Area road trip today, falling to No. 2/2 Cal Saturday afternoon at the Spieker Aquatics Complex in Berkeley. The men fell to the Bears 160-119 while the women fell 192.5-97.5.

The men got off to a solid start in the first few events, with Cody Bybee, Carter Swift and Liam Bresette going 2-3-4 in the 200 freestyle. Zach Poti followed with a second-place finish in the 100 back while Aaron Beauchamp notched another podium finish at third in the 100 breaststroke. Jack Edgemond (200 fly) and Evan Carlson (50 free) each took third to head into the first break.

The distance women also got off to a hot start, with the duo of Cierra Runge and Emma Nordin going 1-2 in the 1000 free to kick off individual events. Erica Laning followed with a third-place finish in the 200 free and Chloe Isleta put up a podium finish of her own in the 100 back.

Silja Kansakoski lit up the pool in the 100 breast, going 1:01.98 to beat second place by over a full second. Freshman Jade Foelske took home second in the 200 fly shortly after while Cam Curry continued her sprint dominance as she tied for second place in the 50 free to head into the first break.

Diver Youssef Selim performed well against the Bears today, taking wins in both the one-meter and three-meter springboard events this afternoon. With today’s sweep, the Egyptian has now achieved the feat three times this season.

Isleta followed her runner up place in the 100 back with a first place finish in the 200 back, touching the wall at 1:58.36 to do so. Both Kansakoski and Nora Deleske podiumed in the 200 breast while the Sun Devils again showcased their stamina, going 1-2-3 in the 500 free in part by Nordin, Runge, Dawson, respectively. Foelske finished up the second part of action with her second podium finish in the 100 fly to lead the women into their second break.

Swift (100 free), Poti (200 back) and Bresette (500 free) all accomplished podium finishes to bring ASU within two events of finished out their meet against the No. 2 team in the nation for both genders.

The men finished with a win in the 200 free relay while the women placed third to round out the meet in Berkeley.

ASU will finished out the remainder of the season at home, welcoming the No. 1/10 Texas Longhorns to Tempe on Jan. 31. Fans can keep up with the action all season-long by following @ASUSwimDive on Twitter.