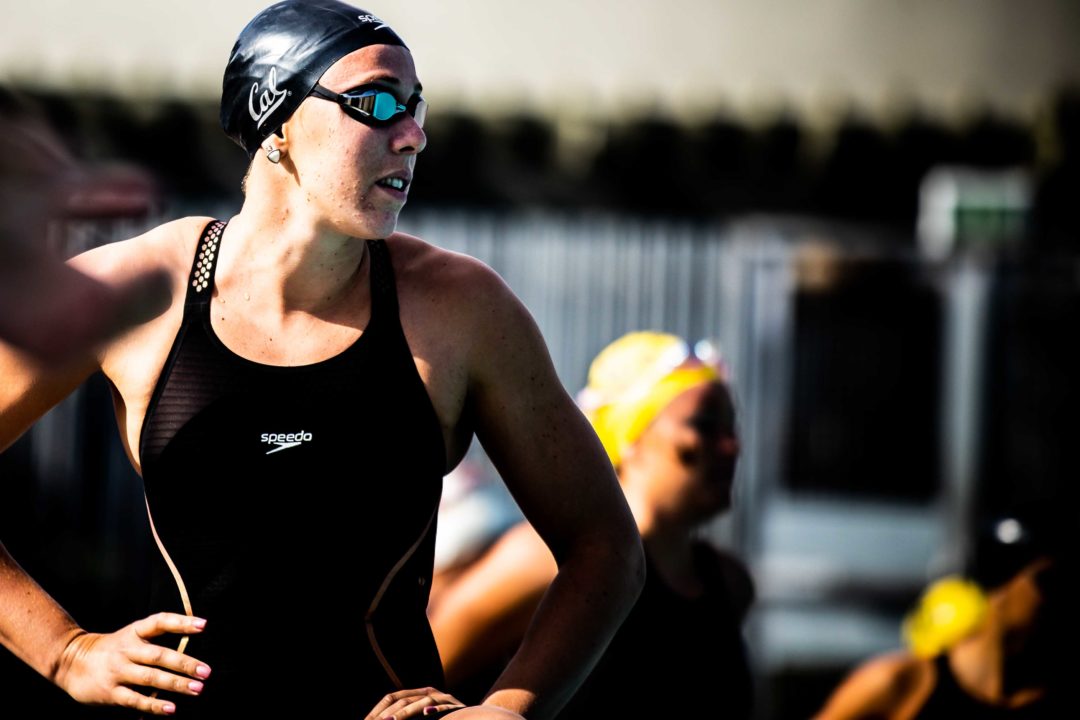 Weitzel, the first woman to ever break 21 in the 50 free, started her schedule with a 20.89 split to anchor the 200 medley relay. Archive photo via Jack Spitser/Spitser Photography

Most of the high seeds in the day 4 races at the Big Ten Championship held their entries, with the exception being star Michigan junior Maggie MacNeil.

The Cal Bears remain undefeated this season as the women defeated Pac-12 opponent USC on the road Friday. Senior sprint star Abbey Weitzeil again swept the sprint freestyles. Weitzel, the first woman to ever break 21 in the 50 free, started her schedule with a 20.89 split to anchor the 200 medley relay. She then won the individual 50 free by nearly a full second in 21.90. Her next individual win came in the 100 free, where she dominated in 48.07. Weitzeil stepped up for one last dual meet 50 freestyle on the 200 free relay, anchoring with a 21.37.

Louise Hansson, a versatile talent for USC, was also a Trojan winner. She won the 100 fly, an event in which she’s the reigning NCAA Champion and NCAA Record holder. Hansson was neck-and-neck with Cal All-American Isabel Ivey throughout the race. They turned just 2 hundredths apart at the halfway point. Hansson got her hands to the wall a nail ahead, winning 53.80 to 53.89.

The meet was close throughout as the Golden Bears won nine of 16 events and the Trojans taking the other seven. However, Cal used its depth to keep its record perfect on the year, particularly with 1-2-3 sweeps of the 200-yard free, 200-yard back and 500-yard free.

After the Trojans edged the Bears in the 200 medley relay and freshman Sarah DiMeco claimed the 1000 free, Robin Neumann paced Cal’s contingent in the 200 free with a time of 1:47.26. She was closely followed by Wilson (1:47.98) and freshman Ayla Spitz (1:48.06), who nipped USC’s Louise Hansson by .12 seconds for the third position.

Weitzeil kept up her torrid pace in the sprint freestyle events this season. Her winning time of 21.90 in the 50 free was the second-fastest time ever by a Cal swimmer in the event, topped only by her record 21.73 set last weekend vs. Arizona State. She then claimed the 100 free in 48.07.

Wilson added her second victory in the 200 IM in 1:59.59, while freshman Rachel Klinker continued her strong start to 2020 with a two-second win in the 200 fly in 1:58.80. The Bears closed out the meet when Eloise Riley, Elise Garcia, Maddie Murphy and Weitzeil reached the wall first in the 200 free relay in 1:30.13, Cal’s fastest time in a dual meet this year.

The Bears continue their Los Angeles trip on Saturday with a noon meet at UCLA and wrap up their dual-meet season at Stanford on Feb. 15.

Sophomore Isa Odgers won two events to lead the No. 8 USC women’s swimming and diving team in their first Pac-12 loss of the season as they hosted No. 1 Cal on Friday (Jan. 31) at the Uytengsu Aquatics Center.

The Women of Troy overwhelmed Cal in diving, going 1-2 in both 1-meter and 3-meter. On the 1-meter springboard, senior Naomi Gowlett led the way with a score of 291.00 while senior Carly Souza finished second with 275.63. On the 3-meter board, it was freshman Nike Agunbiade who came out on top, taking the event with a score of 295.28 while Souza took second with 282.90.

Tomorrow the Trojans hope to bounce back against No. 5 Stanford on senior day where six swimmers and two divers will be honored prior to the 12 p.m. meet at the Uytengsu Aquatics Center.

Dang. What is she going to split when she tapers??

Well, it’s February already and still no news about Weitzeil performing in LCM race this Olympic season. Who cares about under 21sec speed in SCY when the most important meet of the year is 4 months away. Will it be any drama in freestyle sprint at Trials and will American hope Manuel be needed to taper for this meet?

Maybe trying to win a NCAA team title means something to her.

Surely it means something to her especially at her Senior year, but 4 years ago at this time of the season she was #1 American sprinter. Who is she now? Any idea?

If I’m Weitzeil, I’d think of it as follows:

1) Can I medal in the 50 at Tokyo? Outside chance, but multiple tapers for just a 50 is very doable.

2) Can I medal in the individual 100 at the Olympics? Realistically, nothing recently suggests that.

3) Can I be in the top 6 100 freestylers at trials on double taper? In all likelihood, yes.

So why not gun hard for NCAAs?

Who cares? me and every NCAA swimming fan.
Will it be drama? yes, absolutely with Brown and Weitzeil both on fire.
Will Manuel need to taper for Trials? yes

You have to be first an American swimming fan in Olympic year and then only the NCAA one . Where are your priorities? 😀
If seriously, then why didn’t she take time out from college this season? Is it that she wants to complete her education not being sure that there is a certain place for her in National Olympic Team?

if she delays her education and wants to graduate she is going to have to wait another year before getting paid. Not great timing to go pro a year after the Olympics.

And who says the olympics isn’t her #1 priority anyways. I don’t see other Olympic hopefuls competing in tons of LCM meets right now. Most are coming off the ISL which was a SCM course. Once again I think you are way off here Yozhik

I’m a very dedicated fan of Weitzeil and want to see her under 53sec. She had a great 52.5 split in Rio and did some improvement in personal best last season. But still in 53 zone.
There is probably some reason for leading swimmers like Ledecky or Manuel to not mess with short course when Olympic medals are at stake. But Weitzeil does quite an opposite – no LCM races.

I bet you couldn’t go under 21 in a 25. Even if she wasn’t going to focus at all for long course who cares? It’s her life maybe she enjoys scy more maybe she just wants a fun and good senior year. It’s her life let her live it lol

It is immoral to bet when you know the outcome beforehand 😀
As a fan I have rights to demand. As a swimmer she has even more rights to ignore those “demands” as mosquito noise.

As a fan you have 0 rights to demand actually.

Ok, 0 it is. Accept whatever is given. It will save you a lot of nerve cells. But if you don’t get nervous immediately before start signal, if you don’t bite your fingernails being afraid of your expectations got failed, if you don’t get angry when your favorite don’t put much effort in the race
ARE YOU A REAL FAN THEN?

How is it possible that 10:40 gets 3rd place in a major D1 meet? Talk about sprint bias.