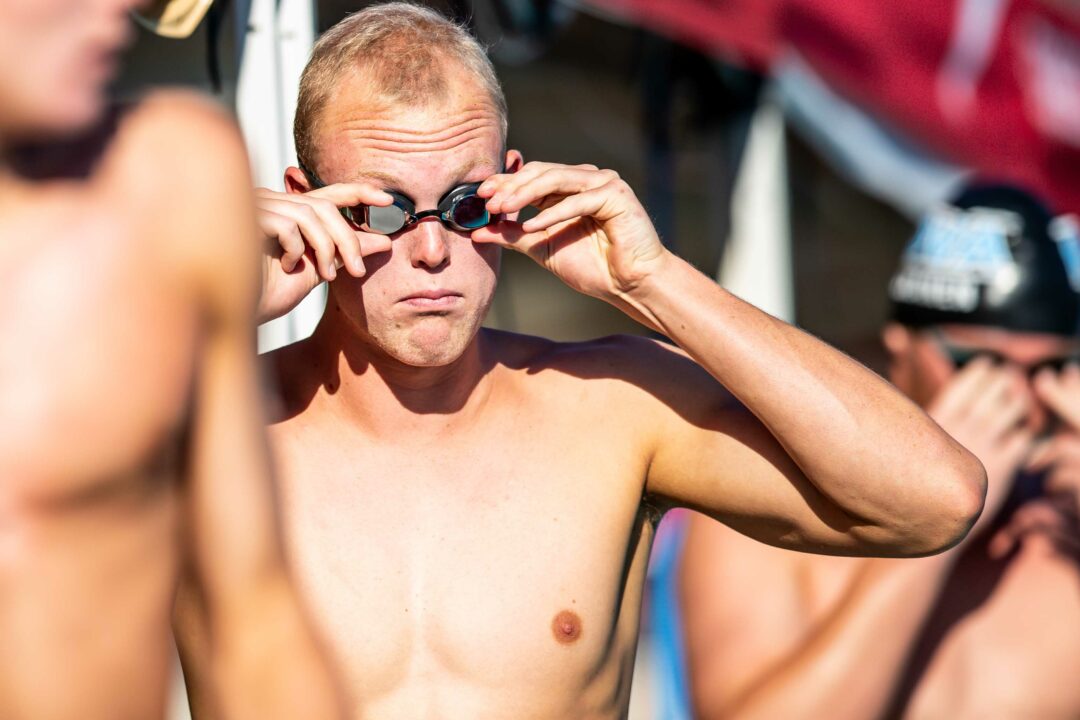 Watch all of the men's and women's "A" finals at the 2021 Minnesota Invite, including a 4:09 in the 500 yard free from 18-year old Texas freshman Luke Hobson. Archive photo via Jack Spitser/Spitser Photography

The Texas Longhorns roared out to an electric early start at the Minnesota Invite, winning the first 6 events (including a sweep of Wednesday’s relays) before their chief rivals at this meet Cal and Michigan got into the action.

Among the highlights of the day was a 4:09 in the 500 free from Texas freshman Luke Hobson, which breaks the national Age Group Record for 17-18s. His prelims swim also broke the record, which was previously held by Michael Phelps.

Texas’ Evie Pfeifer, the top returning women’s 500 freestyler in the nation from last season, won in 4:40.39.

Texas freshman Luke Hobson swam a 4:09.72, which makes him the youngest swimmer to ever break 4:10 in the race. In the process, he beat Arizona’s Brooks Fail (4:10.32), who was 3rd at last year’s NCAA Championship meet in this event.

A great race between Cal’s Destin Lasco, Texas’ Caspar Corbeau, and Michigan’s Gal Cohen, all of whom are underclassmen, saw the top 3 finish within half-a-second. Ultimately it was Lasco who won in 1:41.53, doing enough on breaststroke to hold off the hard-charging Corbeau. That’s a big win for Lasco, given how good Corbeau has been at this meet.

The 50 free was the only of her three individual events that Michigan’s Maggie MacNeil didn’t win at last year’s NCAA Championship meet. She looked sharp here in a 21.50, which is a tenth better than she was at the 2019 Minnesota Invite, her last mid-season invite, in the event.

Texas continued to reap the rewards of 5th year transfer Cameron Auchinachie (from Denver) in the men’s 50 free. He won in 18.80, improving his best time of 19.13 coming into the meet. Just one more incredible weapon in the Texas quiver for this year’s NCAA Championship meet.

The Michigan women, led by a 50.33 backstroke split from Maggie MacNeil, swam 3:27.22 to beat out the Texas Longhorns and a 57.65 breaststroke split from Anna Elendt. That time ranks Michigan 4th in the NCAA this season.

Auchinachie, Corbeau, Alvin Jiang, and Daniel Krueger won the 400 medley relay for Texas in a new nation-leading time of 3:02.48. That’s a second-and-a-half better than anybody else in the NCAA (NC State – 3:04.02) has been this season.

Hobson always breathes to the same side of the pool. Wish we had 25 splits to see if he’s faster breathing left or right. And he goes between 12 and 13 strokes, so he does a double breath into the wall, but only about half the time.

I think he’s just breathing towards his closest competition. If there were challengers on both sides I think (hope) you would have seen him breathing towards both walls with some spot breaths to check the field on the other side of him before the flags.

He seems to really save a lot for the end in general.

Getting a cap on Hobson will go down as Eddie Reese’s biggest coaching accomplishment of all time.