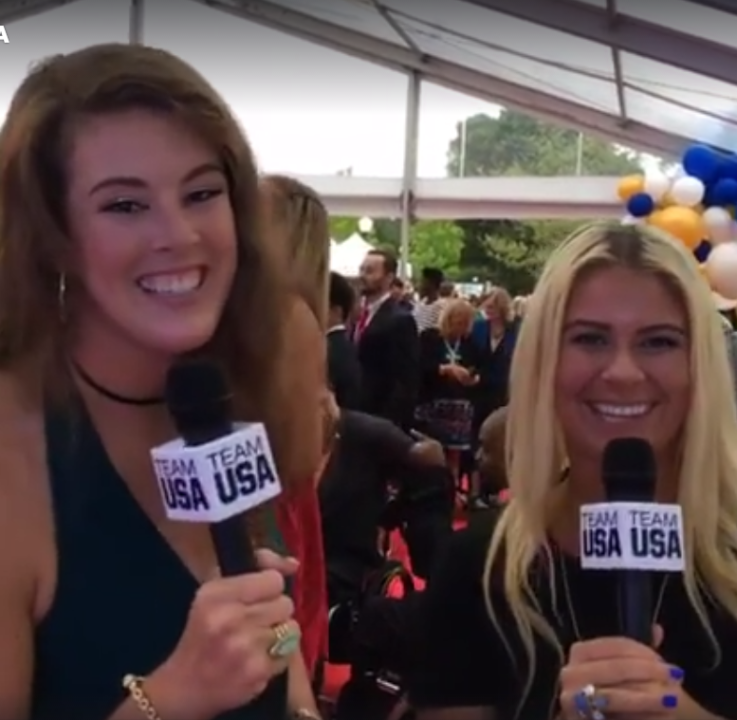 In the above video, the charismatic duo speak to Olympic and Paralympic athletes from across all sports about their experiences in Rio and since coming home.

Lia Neal and Simone Manuel discuss their “Two Lit Gurls” videos that they produced over the course of preparing for and competing in the Olympics.

“I think it’s kind of awesome to see Simone doing her crazy thing and get so much more participation into the sport,” said Neal, speaking to the duo’s influence on swimming participation among the African American community.

Neal also referenced the below statistic, which shows that Manuel’s gold had a marked effect on online searches for swim teams.

The two also had the chance to talk to Katie Ledecky, who would win the USOC Female Athlete of the Year later in the night.

“I’ve been settling into Stanford, so that’s created some good normalcy,” Ledecky said.

She also mentioned her interview on Ellen earlier this month and her new living situation at Stanford, where she rooms with three non-athletes in a suite.

David Plummer joked with Beisel and Schmitt about his kids.

“The toddler just punched the baby in the face yesterday, so we’ve got some things we’re working through,” he said with a smile.

Schmitt and Beisel also spoke with athletes from a ton of other sports, including four of the “Final Five,” Aly Raisman, Simone Biles, Madison Kocian, and Laurie Hernandez. Gabby Douglas was absent after having her wisdom teeth removed earlier this week.

The Olympic swim team (minus four athletes) will be visiting the White House tomorrow.

Can anyone familiar with Stanford swimming comment on whether it’s typical for athletes and non-athletes to room together (i.e. Katie rooming with three non-athletes)? I thought most major programs pair teammates or at least athletes together for freshman year. Some schools take it further and even have dedicated athlete dorms. I’m all for getting the full college experience but an athlete’s schedule is much different than that of a normal student. Getting up early is always easier to do if you have a teammate to take that cold walk or bike ride to the pool with (not to mention safer). There’s usually no all nighters or trips to get coffee if you know 5 am practice is around the corner.… Read more »

Oh god, they advocated for riding elephants in Thailand half an hour into the video.