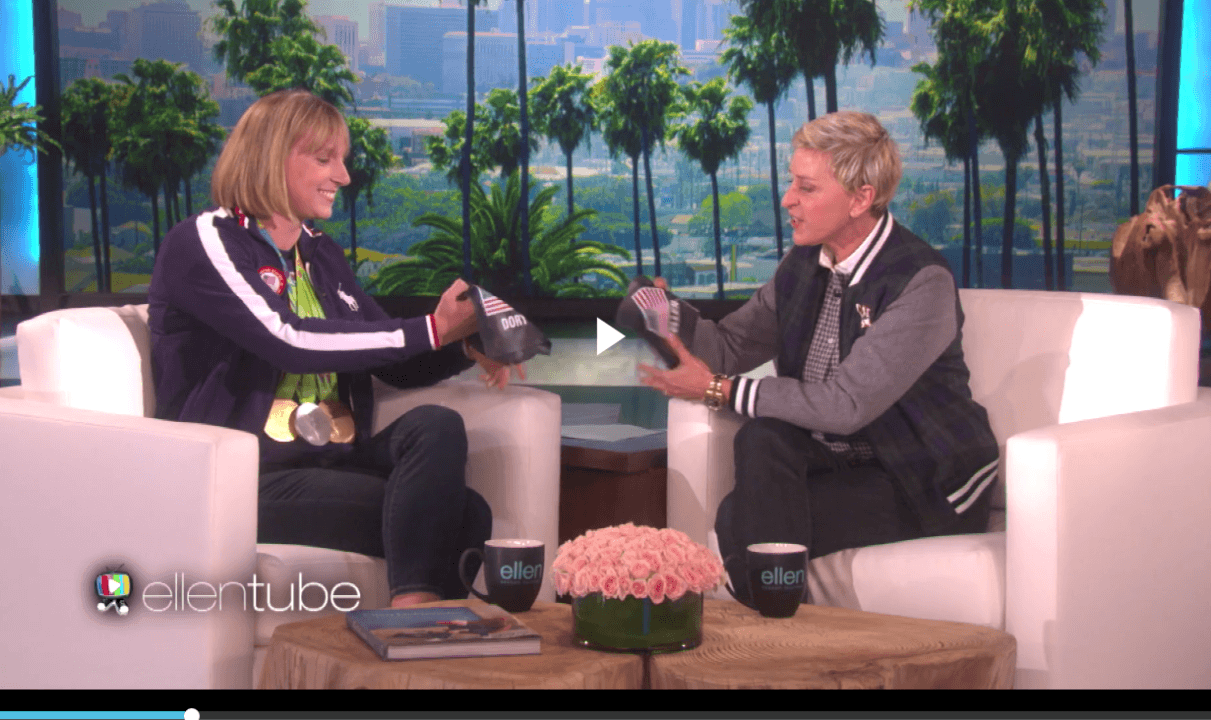 On Ellen today, Ledecky completely mastered “a fake sport that we made up that no one’s ever heard of,” taking down American Ninja Warrior’s Grant McCartney.

The best part was her quiet confidence throughout the first two rounds as McCartney danced, flexed, and jumped with excitement at his performance.

Of course, Ledecky’s cool-headedness prevailed in the end, and her arms-in-the-air victory walk, complete with a look straight at the camera, is worth a re-watch.

This is solid proof that Ledecky can do anything. (Remember her Washington Nationals first pitch near-strike last month?)

Ledecky won a waffle iron as her goofy game-show prize, but she said up-front that she won’t accept prizes to keep her NCAA eligibility.

In her short interview with Ellen DeGeneres, Ledecky talked about American freestylers who inspire her (Debbie Meyer, Shirley Babashoff, and Janet Evans).

Ledecky also talked about her upcoming career at Stanford (she moves in this week), mentioning that Stanford freshmen don’t learn their roommate assignments until move-in day.

“I have the same freshman nerves that I think every freshman has.” Ledecky said.

Inadvertently proving that the NCAA rules are stupid.

If you can take seven hundred thousand in prize money she better be able to take a waffle maker.

History showed us that it’s never appropriate with degrading comments directed to groups of people believing in something. ????

Jack Conger and Kathleen Baker are on the list.
That’s 2 golds and a silver.

Uh not exactly related to this article…

But at least for Baker, it’s public knowledge that she has inflammatory bowel disease (Crohn’s disease) and needs to be on Prednisone.

Remember there are therapeutic exemptions.

Which are a whole ‘nother can of worms. (Baker’s case is obviously what therapeutic use exemptions were made for, it’s the over-abundance of athletes that need inhalers for asthma and stuff that starts getting iffy.)