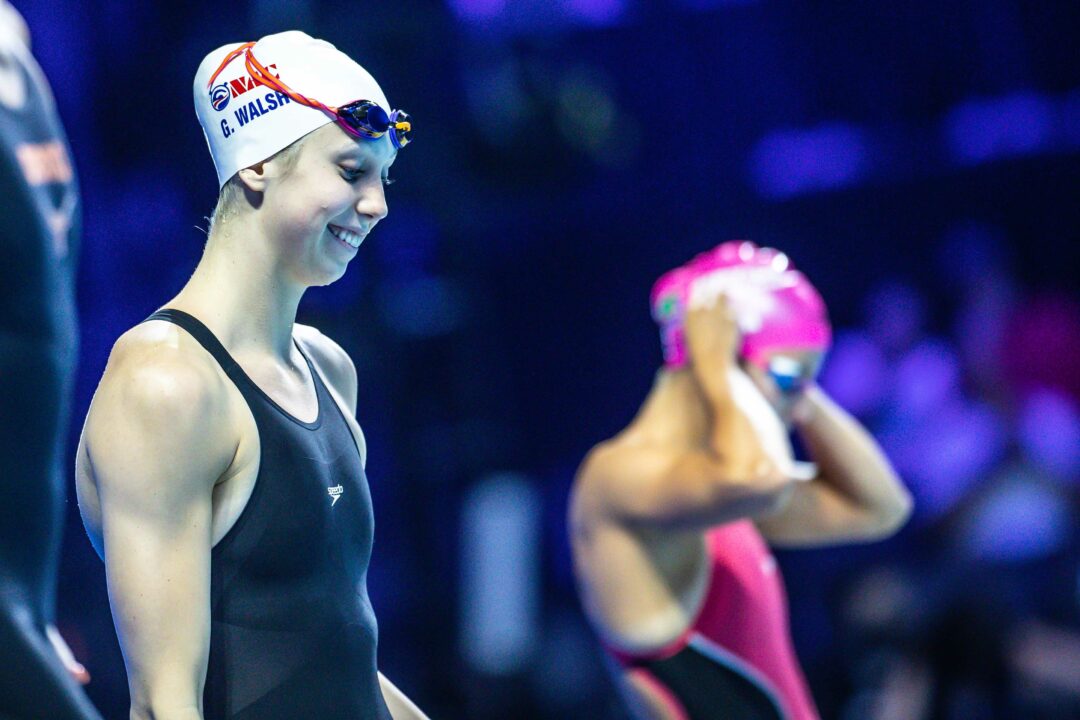 The 18-year-old Popovici posted a time of 3:43.00, shaving more than three seconds off his previous best to edge 17-year-old Vlad Stancu.

Popovici was more than three seconds ahead of the field as Mihai Gergely touched second in 1:46.59 and Vlad Stefan Mihalache placed third with a 1:49.08

David Popovici dropped more than a second off his best 100 IM time, but it wasn’t quite enough to secure his third national title in as many days

As previously reported in the dual meet recap (men) (women) for UVA vs NC State, eight total pool records were broken and Gretchen Walsh swam to an *unofficial* American record in the 50 backstroke while leading off the 200 medley relay. View some of the highlighted races below:

The ‘A’ relay made up of Gretchen Walsh, Alexis Wenger, Alex Walsh, and Kate Douglass can be seen in lane 5 leading the whole way. Gretchen Walsh led off the relay in a 23.04 which is an *unofficial* American record as well as the second fastest 50 backstroke split of all time. The relay finished in a time of 1:33.74 breaking the pool record.

Kate Douglass can be seen in lane 5 swimming to a win in the 100 butterfly. She swam a time of 51.30 to break a UVA pool record. That time was also a season best for Douglass (Note: she did not swim the event at midseason)

Alex Walsh swam out of lane 5 winning the heat of the 200 IM and breaking the pool record in the process as she swam a time of 1:56.35. That was Walsh’s first time swimming the event this season. UVA’s Ella Nelson finished second out of lane 3 in a time of 1:58.32.

NC State’s David Curtiss swam to a pool record and victory in the 50 freestyle touching the wall in a time of 19.38. Curtiss can be seen in lane 4. UVA’s Matt Brownstead finished second out of lane 5 in a time of 19.50.

A couple things stood about about the W 200 medley. First, going 1:33 unsuited is absurd. Second – GWalsh’s 23.0 — to do that unsuited and with *no backstroke wedge* is mind-blowing. She also circle swam. Could she go 22.5? It seems 22.7 is a virtual lock. Third – AWalsh breathing every stroke in a 50 fly was kinda funny. Her undies are so good that she doesn’t take too many strokes anyway. Wenger and Douglass are amazing too. Douglass makes the pool look small. That relay can realistically go 1:31 at ACCs/NCAAs – just wow.

You’re right. My bad. I see them pulling it out of the water now.

alex walsh also breathes every stroke in her 200 fly.

G Walsh’s underwater off the turn was insane.

So fun to watch! Thanks to whoever did such a great job recording 🙂

Gretchen circle swimming lane line to lane line on her backstroke. If she figures out the whole going straight thing for ACCs and NCs we could see something crazy.

Oh, I hope she doesn’t learn just so we can hear Rowdy’s full 5-octave range at NCAAs.

College swimming gets crazier year after year.. and it’s January. Gretchen Walsh is a stud!!

Wonder why Alex Walsh breaths every stroke in a 50 fly. The best two 50 flyers in the world (Santos, Sarah S) keep their head down. Seems like that’s worth giving it a try!

She said before that’s how she’s always done it and it works best for her.

If you have always done it how do you know its best? To be the best I’d take notes from the WR holders

Guessing it works better for her

Do you know she hasn’t tried it?

Curtiss v. Browstead / King — Curtiss really got killed on the start and turn, but he was so much faster over the water. Ervin-like. He is going to have a mean LC 50.

Yeah that was surprising to me to see.

Yeah, I should have said he already HAS a mean LC 50. But this summer could see something special.

All these swimmers will be smashed by the GOAT Caeleb Dressel this summer at nationals.

Not a GOAT when you have to add the name, fanboy.