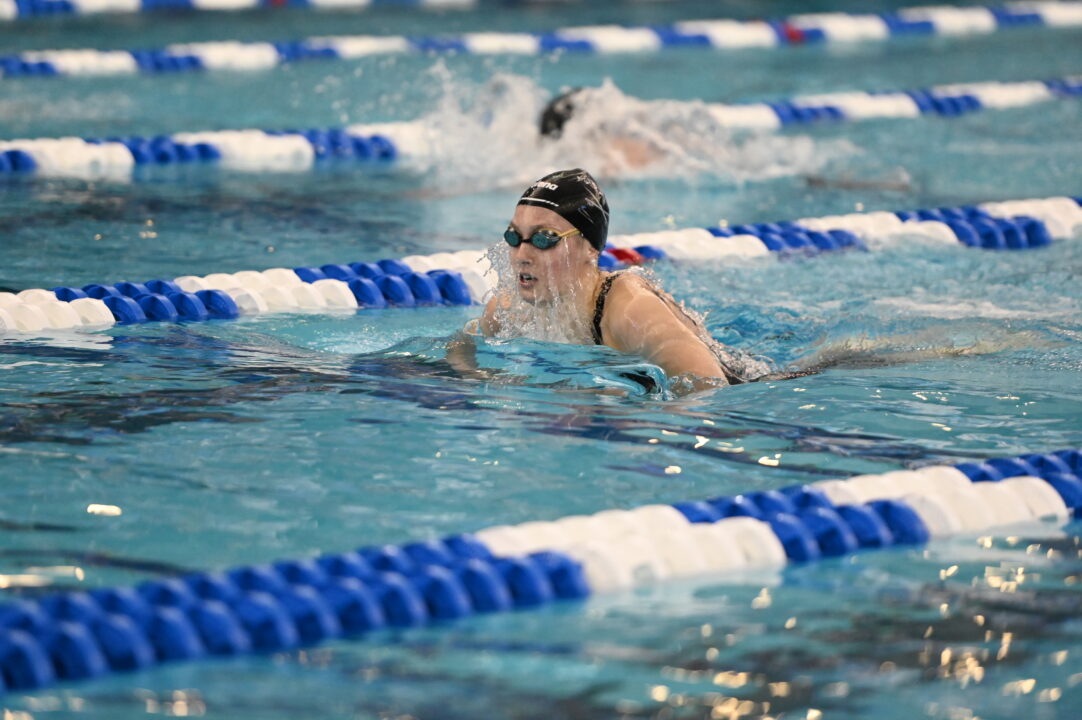 In a battle of the top two teams from last year's ACC and NCAA Championships, the Virginia Cavalier women defeated the NC State Wolfpack 173-122 at home. Archive photo via the NCAA

Avoiding recent cancellations that other teams have seen this weekend due to Covid or weather concerns, the NC State Wolfpack made the short trek north to Charlottesville, VA, to take on the Cavaliers in their home pool in a battle of the top two teams from last year’s ACC and NCAA Championships.

While NC State should once again be a force to be reckoned with at both ACCs and NCAAs, they weren’t able to come close to a dual meet win, as the Cavalier women handily defeated the Wolfpack 173-122, with Virginia exhibitioning several events. Five women doubled for the Cavaliers, accounting for most of the individual victories. According to those at the meet, the vast majority of the competitors were wearing practice suits, with only a couple UVA seniors who will not be competing at ACCs wearing tech suits today.

The biggest performances of the day came from Virginia freshman Gretchen Walsh, who set an unofficial American Record leading off the Cavaliers’ 200 medley relay with a 23.04, moving her to the #2 performer all-time in the 50 yard back.

Gretchen’s sister Alex Walsh also doubled, winning the 200 fly in 1:54.76 and the 200 IM in 1:56.35.  The latter event was technically exhibitioned, so NC State earned all the points, but Walsh’s time stands as a new pool record. Walsh’s fellow 200 IM Olympic medalist Kate Douglass stuck to shorter events today. She won the 50 free, the event in which she is the defending NCAA champion, in 21.85, and then she won the 100 fly in 51.30, setting a season-best time for her in the 100 fly and an AFC pool record.

Alexis Wenger was UVA’s final individual winner, as she got under a minute to win the 100 breast in 59.39.

The Wolfpack women only picked up one outright win, not taking into account wins from events that UVA exhibtioned. That lone victory came courtesy of Katharine Berkoff, who held off UVA’s Reily Tiltmann to win the 200 back 1:53.26 to 1:53.94. Those two swimmers should duel in this event at both ACCs and NCAAs, where last year Tiltmann finished 5th and Berkoff finished 6th. Today, Berkoff also finished 2nd to Gretchen Walsh in the 100 back, touching in 51.71.

Notably, NC State was without NCAA champion Sophie Hansson, but especially if she’s back for championship season, the Wolfpack should be the prohibitive favorites to finish 2nd behind the Cavaliers at ACCs, and should also be in the mix to defend their 2nd-place finish at NCAAs.

Is Hansson’s return in doubt?

Well, it is twenty twenty too so who really knows any more???

NC State was swimming exhibition against UVA by the end, woah.

For the hype they’ve been getting, it’s pretty evident when going against a legit team that UVA just doesn’t have the talent

No apparently the hashtag desorbo created for himself #thedesorboeffect doesn’t pertain to the men’s team. They can’t compete

Dual meets aren’t the best metric used to judge teams at all, but you can tell if a team has more talent pretty easily.

While UVA has some strong pieces, they are a far way away from being able to hang with the big boys. Top teams never get blown out by this much, and I don’t think this is an issue of UVA not resting that much.

Their times seem to be normal and good for their standards, but there’s a pretty clear difference in depth between the two teams

“Top teams never get blown out by this much” Did you watch the women’s meet? NCS women supposedly top 5 got absolutely blown out by similar proportions to the UVA men. Your comment just isn’t accurate, get off social media.

Do you mean depth or talent? I’d argue that UVA has the top end talent, but lack depth, with NC State beating them in terms of depth.

i assume you’re talking about the UVA men? but I haven’t really seen much hype around them

All you gotta do is look at their Instagram.

A social media account affiliated with the team hypes up the team. Who would have thought?

What are you even trying to say…the UVA women obliterated NC state?

Whoever it was who gave NCSU women a 1st place vote over UVA in the CSCAA rankings should be feeling quite sheepish, to say the least.

Ehhh they were getting killed so NC state exhibitioned the last races. Not a great day for the UVA men