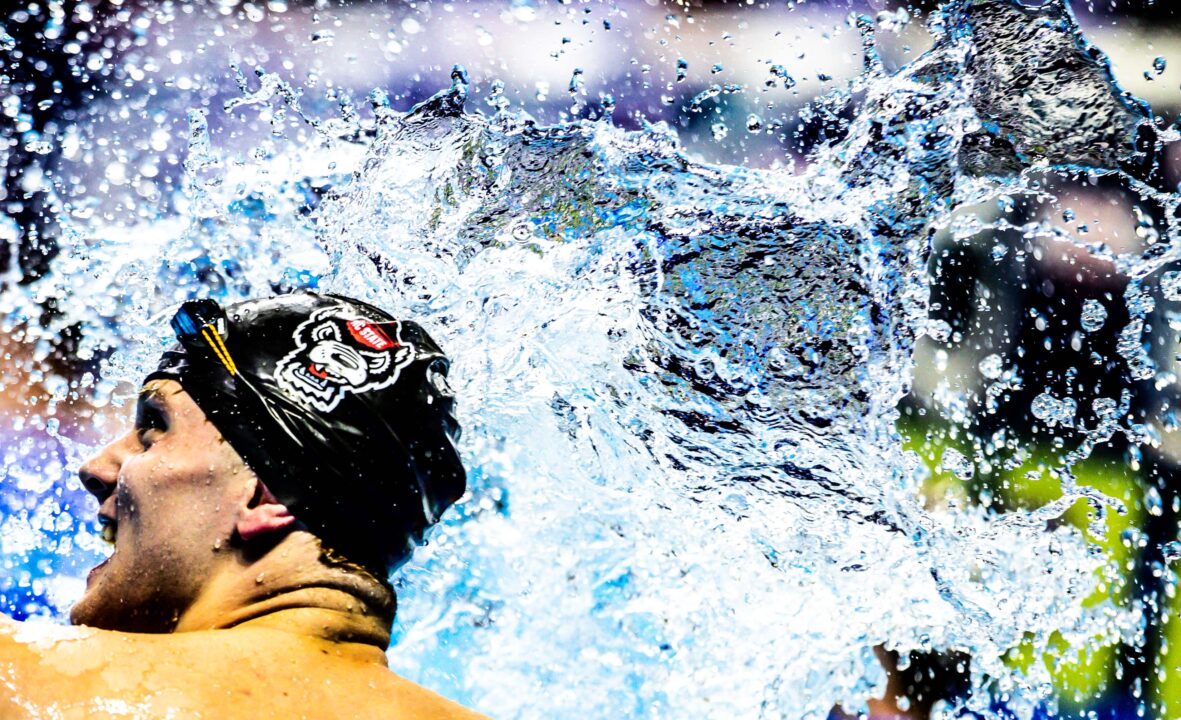 The NC State men dominated the University of Virginia pool, as the Wolfpack won all except three events in a session that saw three pool records fall. Archive photo via Jack Spitser/Spitser Photography

Avoiding recent cancellations that other teams have seen this weekend due to Covid or weather concerns, the NC State Wolfpack made the short trek north to Charlottesville, VA, to take on the Cavaliers in their home pool in a battle of the top two teams from last year’s ACC and NCAA Championships.

While the UVA women easily handled their NC State counterparts, the tables were turned on the men’s side, as the Wolfpack defeated the Cavalier men by a score of 191 to 104, even with NC State forgoing points and exhibitioning events towards the end of the session. According to those at the meet, the vast majority of the competitors were wearing practice suits, with only a couple UVA seniors who will not be competing at ACCs wearing tech suits today.

Again, in a mirror image of the women’s meet, the NC State got rocking right away as the Wolfpack set the tone by setting a UVA pool record in the first event, the 200 medley relay. Kacper Stokowski led off in 21.24, followed by Rafal Kusto (23.96), Nyls Korstanje (19.97), and David Curtiss (18.97), a combined time of 1:24.14. That’s actually the exact same time NC State swam at last year’s ACCs championships, where they finished 6th in this event. Stokowski was only 0.06s slower today than he was at least year’s ACCs, while today the Wolfpack got faster unsuited fly and free splits than they got at ACCs.

NC State’s ‘B’ relay took 2nd in 1:24.97, with a 21.34 leadoff leg by Aiden Hayes, primarily known for his butterfly prowess, particularly standing out. UVA’s ‘A’ relay was almost another second behind at 1:25.72, with Noah Nichols‘ 23.80 breaststroke leg the only split on which a UVA swimmer was faster than a NC State swimmer.

The 50 free proved to be a battle of underclassmen. NC State freshman David Curtiss got his hand on the wall first in 19.38, followed closely by UVA sophomores Matt Brownstead (19.50) and Matt King (19.61). Curtiss’ time set a new AFC pool record.

Once again, it was Noah Nichols who managed to escape the NC State stranglehold, as the Cavalier completed the breaststroke sweep with a 1:56.68 win in the 200 breast.

NC State exhibitioned the final individual event, the 200 IM, but Mikey Moore touched first with a 1:46.67. UVA’s Casey Storch touched 2nd with a 1:47.37, and was officially credited with the victory.

While the score proved to be lopsided, UVA managed to finish the session on a high note as their ‘A’ relay set a new pool record in the 200 free relay in a thrilling race.

Wondering if the UVA men’s program will ever catch up with the women’s? Yikes.

Is Jack Walker still at UVA? As an NC guy, was looking forward to watching him swim today. He’s not listed on their roster, unless I overlooked his bio.

he recently quit the team

He was asked to leave the team

Lots of “rolling” going on in Charlottesville this weekend.

They are so good and versatile that there HAS to be more than one of them….

Curtiss has a world class 50 but he’s got a long way to go to catch Douglass in versatility. She and especially Alex Walsh (okay Gretchen too) looked in a whole different league from some still pretty world class swimmers.

It remains to be seen with Gretchen. Alex may be a tad more versatile than Kate. They’re good but me thinks Smith, Huske and soon Curzan are a level above

Looking for some REAL competition! TOO EASY! Too bad the SCAREDY CAT Horns are too chicken to come to Raleigh.

As someone who was at both the uva-texas and uva-ncsu meets, Texas was much more impressive, as you’d expect knowing anything about men’s college swimming.

Actually…if you actually looked at the results of both meets, you’d see that if you combined the results from this meet with those from the Texas/UVA dual back in November, NC State men would have won almost every event, and in many cases would have taken the top 2 or 3 spots. So I’m not sure what you mean by “Texas was much more impressive.” Numbers don’t lie. This was simply a faster meet. To the Wolfpack: congrats on an impressive performance!

31
-4
Reply
Braden Keith
Admin
Reply to  Do your research…

As soon as yesterday’s results get loaded into the USA NCAA database, we can verify this via Swimulator.

1
0
Reply
Greg
Reply to  Do your research…

Well it’s sort of apples and oranges comparing dual meet times from early November to mid January, especially with different programs at different states in their training. NCSU came in relatively fresh yesterday and were fast, but I stand by what I saw at both meets. Texas is deeper and doesn’t have any weak spots. TBH it’s kind of sad and ridiculous that pack fans will try to use dual meet times from yesterday to justify that they have a chance against Texas in March.

I don’t think anyone would argue Texas isn’t a huge favorite currently at NCs. I don’t know Windle’s status and that could change the dynamic with Cal but they are the favorites until shown otherwise. That doesn’t detract from State looking real good right now. I doubt they were ‘fresh’ unless you mean they didn’t have AM practice since they were on a 4 hour bus ride until an hour before the meet. There are some great teams out there right now and all we really learned is that UVA isn’t among them either in the pool or in classy behavior.

Fresh? You didn’t see their practices this past week…

Every time NCSU goes relatively fast, all we ever hear from numbnuts like you is that they’re “fresh” or “rested” or “tapered” or that they aren’t training as hard as their competitors right now. Give it a rest. Comparing any dual meet to any other dual meet is pointless.

0
0
Reply
Tea rex
Reply to  Do your research…

I mean, Texas had a duel meet this week. Could use that as a reference point if you weren’t going for pure puffery

6
-3
Reply
Breezeway
Reply to  Do your research…

My man, you know you can’t argue anything against Texas on this site with the fans or admins no matter if you’re right or wrong. That’s worse than fueling your fire pit with the flag or holy bible

Are numbers hard for you GREG? Its OBVIOUS to see that the PACK would have DESTROYED Texas. The PACK would have been exhibitioning before the second break. Too bad we will never get to see it because it seems like men from Texas are SCARED.

Oh I get it, you’re like the Hoosier Daddy for NC State.

As an pack fan, I endorse downvoting this comment

Nutty performances across the board. Top 3 relays under the pool record in 200 Medley. NC State with 3 guys under 47 in the 100 fly. Sam Hoover and Luke Miller with dominating performances. David Curtiss showing some consistency at speeds near the peak of his career. And all of this unsuited. Props to UVA as well with an amazing 200 free relay and many stand out performances.