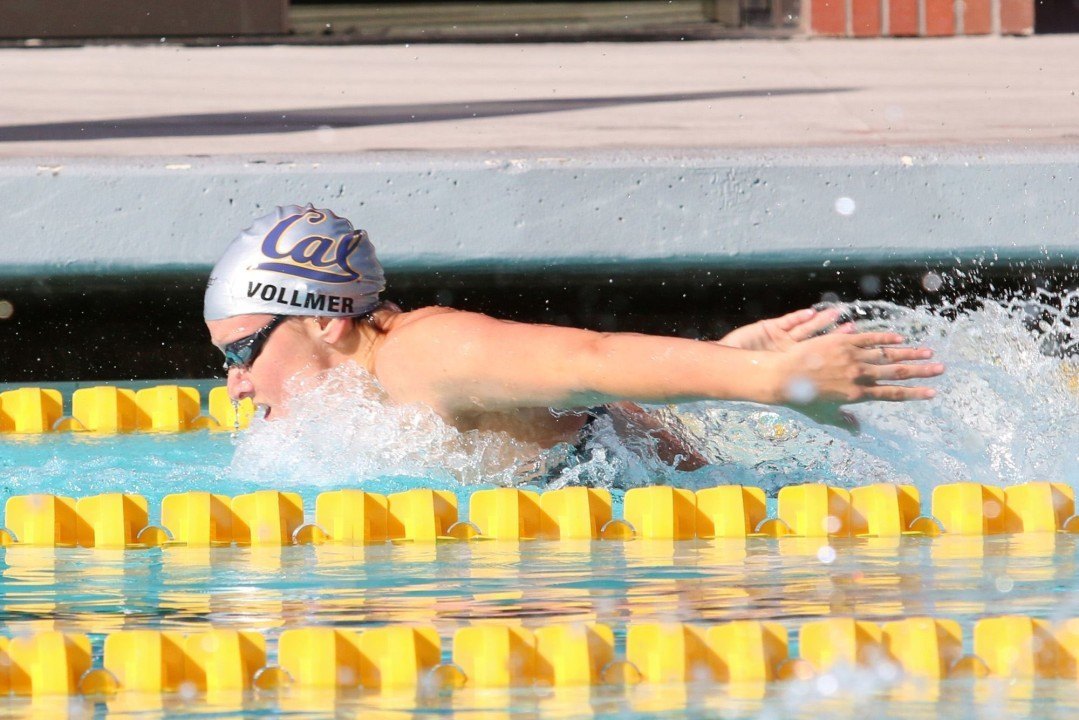 In the first event of the day, world record holder Dana Vollmer returned to the pool after a 2 year hiatus. Following the World Championships in 2013, Vollmer was absent from competition, despite never officially retiring. Current photo via Richard Quinton

Friday nights finals at the Los Angeles Invitational was a tune up for many of the swimmers on the U.S. World Championships Team roster.

In the first event of day 4 at the L.A. Invitational, world record holder Dana Vollmer returned to the pool after a 2 year hiatus. Following the World Championships in 2013, Vollmer was absent from competition. It was then announced that she was expecting her first child. Vollmer never officially retired, and her 55.98 from the 2012 London Olympics still stands as the world record.

In the first swim of her comeback, she qualified 2nd for finals in 1:00.05. She’ll take lane 5 after Farida Osman took the 1st spot in at 59.31. It will most likely take a 59 low to win tonight. Osman’s shown consistent improvement from prelims to finals at this meet. Kelly Naze and Andrea Ward weren’t far behind, qualifying 3rd and 4th respectively in 1:00.33 and 1:00.35.

Behind Shields, Cal sophomore Justin Lynch grabbed the 2nd seed with a 53.59. Tucson Ford’s Masha Kishada rounded out the top 3 seeds in 54.17. He was followed closely by Stanford’s Andrew Liang and GCA’s Marcus Schlesinger, who tied at at 54.35. Former West Virginia All-American Bryce Bohman, who trains with Kishada in the Arizona post grad group for the summer, was the next fastest at 55.30.

The 100 back finals will see Ryan Murphy and Matt Grevers go head-to-head. Murphy took the top seed with the only sub 56, touching in 55.85. Grevers followed with a 56.01.

Trojan Swim Club’s Luca Spinazzola will challenge them tonight. He came in at 56.22. Bryce Bohman swam back-to-back events to take the 4th spot in finals with a 56.96.

She’ll also be challenged in the final by Arizona’s Emma Schoettmer, who won the 200 breast by a large margin. Schoettmer went 1:12.66 this morning to qualify 7th. She could make this race interesting, as she dropped almost 5 seconds from prelims to finals last night.

U.S. World Championship Team member Brendan McHugh took the top spot in the men’s 100 breast, swimming to the wall at 1:01.61. McHugh chose to scratch the 200 breast last night, but he’ll be swimming the 100 breast again. He’s only swimming the 50 breast at worlds, so he’ll use this meet to try and make the 2015-2016 U.S. National Team.

USC’s Steven Stumph recorded a personal best in this event with a 1:02.84. He had previously been 1:03.05 in April. He’ll be swimming out of lane 1 after qualifying 7th this morning.

Tucson Ford’s Margo Geer continued to swim strong in the prelim races. Her 2:02.40 in the 200 free, which qualified her 2nd, was just off her best of 2:02.20 at the 2015 Southwest Classic. Geer is more of a competitor in the 50 and 100, but if she chooses to swim this event again in finals, she’ll have a shot to earn another best time.

Cal’s Camille Cheng took the top spot in 2:02.36. That puts her in front by just .04. Both Geer and Cheng will be looking for their first win of the meet in this event.

I think Sheilds will be slower in the finals tonight, but that was a good time for him.

To the uniniated no one will know what event is referred to for Margo , Camille etc