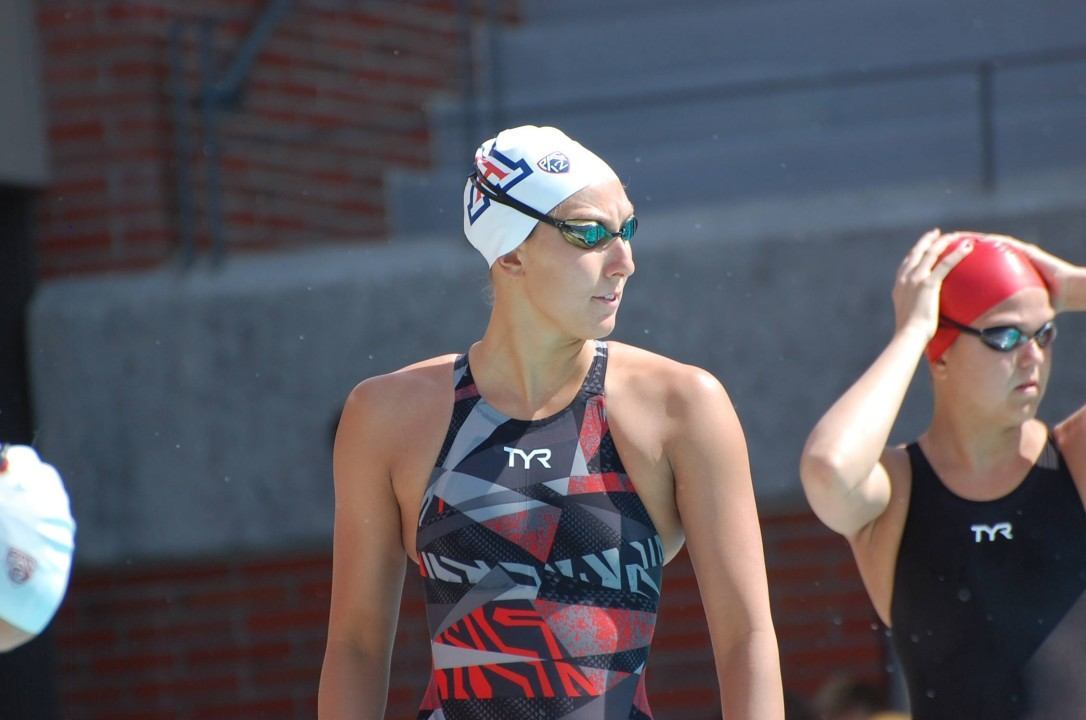 Day 3 prelims at the Los Angeles Invitational set the foundation for exciting races between some of the world's top swimmers. The 50 free will see another battle between Adrian, Morozov, and Lobintsev. Current photo via Anne Lepesant

Friday nights finals at the Los Angeles Invitational was a tune up for many of the swimmers on the U.S. World Championships Team roster.

Day 3 prelims at the Los Angeles Invitational set the foundation for exciting races between some of the world’s top swimmers. Murphy will look to capture another 1st place finish after dominating the 200 back yesterday. Adrian, Morozov, and Lobintsev will square off in the sprint freestyle again. Geer, America’s top 100 freestyler in 2015, will look to leave her mark on the 50 as well.

The men’s 200 free set up a battle between top qualifiers Nikita Lobintsev and Ryan Murphy. They went head-to-head in the final heat of prelims, with Lobintsev claiming the top spot by just one tenth of a second, 1:51.76 to 1:51.86.

Murphy’s Cal teammate Trent Williams will compete with him tonight, qualifying 4th in 1:52.31. He was just off 3rd place qualifier, NOVA’s Spenser Goodman, who touched in 1:52.30. It took a sub-1:54 to get into the championship final, as Marshal Parker clenched lane 8 with a 1:53.95.

Arizona’s Emma Schoettmer will swim in her first final of the meet after qualifying first in the 200 breast with a 2:32.03. She’s narrowly in front of Trojan Swim Club’s Rami Dvariskyte, who clocked a 2:32.13.

Those two will be challenged by incoming UCLA freshman Emma Schanz. Schanz qualified with a 2:33 flat. Pac-12 champion Sarah Haase put herself into the mix with a 2:33.78 this morning for 4th. 3 of the top 4 swimmers are Pac-12 rivals who will likely meet multiple times during the NCAA season.

Former world record holder and breaststroke legend Kosuke Kitajima made an appearance in the 200 breast this morning. He qualified 2nd in 2:14.19. He sits behind top qualifier Steven Stumph from USC, leading with a 2:13.44. Brendan McHugh will be representing the U.S. in the 50 breast in Kazan. He qualified 3rd here with a 2:15.09. Cal’s Chuck Katis made huge strides in his final NCAA season. He’ll be taking lane 6 tonight after posting a 2:17.14.

Tucson Ford’s Margo Geer earned the top qualifying spot again this morning in the 50 free with a 25.17. Geer broke 54 yesterday to become the fastest American this year in the 100 free at 53.95. She’s currently the 5th fastest American in the 50 after posting a 25.09 earlier this season. She’s already been under 25, clocking in at 24.95 at 2014 Summer Nationals time trials. She’ll be looking to improve on that tonight and set another personal best before heading to the World Championships.

Cal’s Farida Osman will challenge Geer for the win. She was the only other woman under 26, swimming to a 25.55. She’s already been under 25 this year, recording a 24.92 at the Arena Pro Swim Series in Austin.

In yesterday’s 100 free, Morozov, Adrian, and Lobinstev were separated by less than 2 tenths of a second. In the 50 free, those same 3 men will battle it out in the middle of the pool. Nathan Adrian was the fastest qualifier in 22.09. He’ll look to overcome Vlad Morozov after narrowly finishing 2nd in the 100.

Morozov and Nikita Lobinstev tied for 2nd in prelims, both touching at 22.68. Lobinstev will have a quick turnaround if he chooses to swim both the 200 and the 50 in finals. Another tie, this time for 7th, will put Matt Grevers in a position to improve on his 23.53 in the championship heat.

3 men broke 4:30 this morning in the men’s 400 I.M. to take the top 3 spots. The field is led by AZOT’s Corey Okubo, who also swims for Princeton, in 4:26.41. He had a sizeable lead over everyone in prelims, but he’ll have to take down Stanford’s Curtis Ogren and Cal’s Adam Hinshaw in the final. Ogren and Hinshaw both hit the wall in 4:29.86 to tie for 2nd.

Excited to see what murphy can do in the 200. I think breaking 1:50 and going 1:49 low would be a statement of a swim after his outstanding 200 back yesterday. His freestyle has a lot of room for growth. Lobintsev will be pushing him.

Adrian needs to be under 22 in the final, or else Morozov is placed in a strange position of confidence where he has almost always beaten Adrian whenever they’ve gone head to head in the past 6-8 months. He can win it but he needs to improve upon his 21.97 this season. Morozov could realistically go anywhere from 21.6 to 22.5 tonight. The Russian can always swim fast.

I think he has a lot of potential for relays in the 100 and 200 free. He’s always been a great relay swimmer.

Adrian was much better in finals than prelims yesterday. I think he will be at least 21.7. I don’t follow Morozov closely enough to know what he puts up in regular season meets. But I think it’ll be close, both under 22.