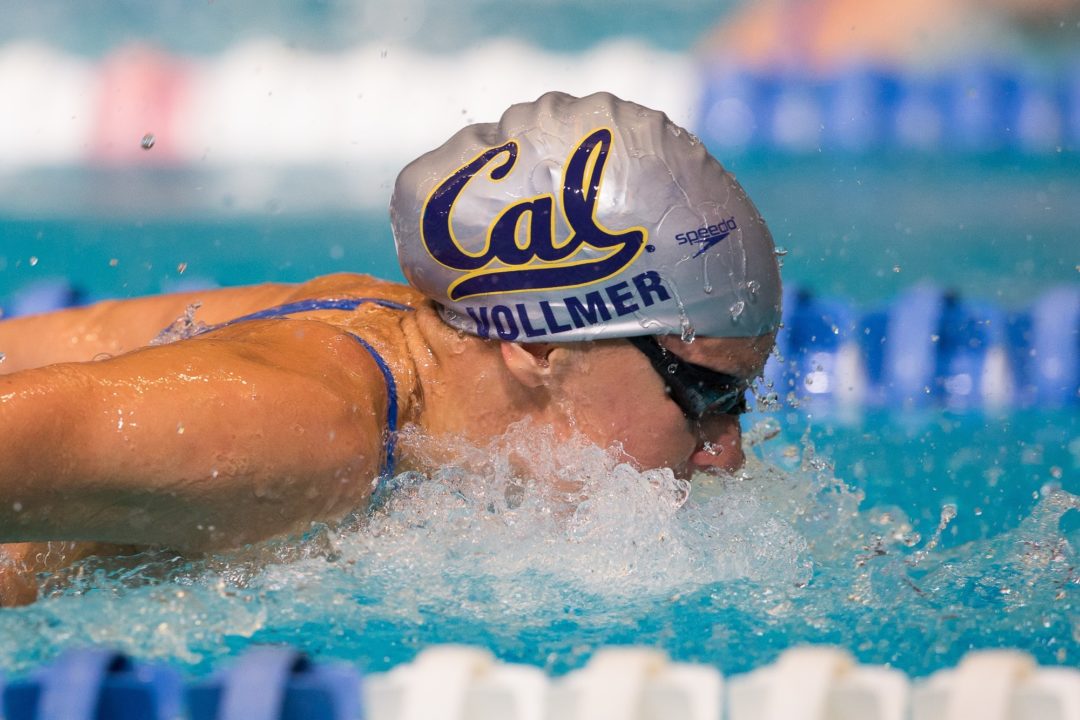 Olympic champ and world record-holder Dana Vollmer made her much-anticipated return to competition this morning, going 1:00.05 in the 100 fly at the L.A. Invite. Archive photo via Tim Binning/TheSwimPictures.com

Vollmer took an extended break from swimming after the 2013 FINA World Championships, and it’s been about two weeks shy of two years since she last raced.

But Vollmer had always made it clear she wasn’t officially retiring, just taking a break from competing. She and her husband had a child earlier this year, but Vollmer started dropping hints this spring that she was already back in the water, feeling out her strokes with the possibility of returning to competition.

This weekend’s L.A. Invite was her first meet swim in a long while, and though there was certainly some rust, her 1:00.05 was still enough to qualify second overall in what’s a quite fast meet up and down.

Vollmer, competing once again for Cal Aquatics, was the second qualifier to only current Cal Bear Farida Osman (59.31). At age 27, Vollmer finished ahead of a number of college and former college stars in the heats, including Cal’s Kelly Naze, UCSB’s Andrea Ward and USC’s Lucy Worrall.

Vollmer won the London 2012 Olympics in the 100 fly, stunning a tough field with a 55.98 that still stands as the world record and the only swim ever under 56 seconds.

She’ll presumably compete again in the final, where she’ll look to get under a minute for the first time since 2013. Though she clearly has her work cut out for her to be able to compete internationally again, her time in this prelims swim would have earned her a B final slot at last summer’s U.S. Nationals – a fair place to start for an athlete with a long road ahead, but some very intriguing 2016 potential.

Solid effort ,let’s see what she can do in finals. She’ll be swimming 57s as early as December at this rate

I am hoping you are right. That would be cool if she did hit 57s so quickly.