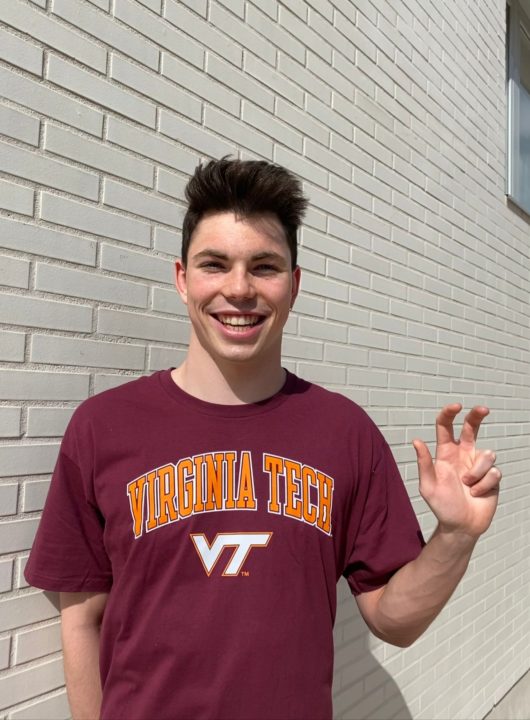 Freestyle and IM specialist Luis Domínguez has verbally committed to swim for Virginia Tech beginning in the fall of 2021. Current photo via Luis Domínguez

Luis Domínguez of Spain has announced his decision to swim for Virginia Tech’s class of 2025. Domínguez swims club at E.M. El Olivar located in Zaragoza. He will join the H2okies beginning in the 2021-2022 season.

I’m extremely excited to finally announce my verbal commitment to University of Virginia Tech. I would like to thank all my family, friends, coaches and teammates who have supported me throughout this years! I can’t wait to be there and be part of the Hokie family!!

In July of 2020, Domínguez was selected by the Royal Spanish Swimming Federation to swim at the Meeting de Loule. He was one of 5 people to be selected to their Men’s Junior National Team for the meet in Portugal. He raced in the 50, 100, 200, and 400 free, and the 200 IM. His top finish was in the 50 free, where he touched 9th.

Below is a table of his personal best times:

Virginia Tech finished 3rd at the 2021 ACC Championships last weekend. Ramadan earned the team’s only individual gold medal, finishing first in the 100 fly. He broke the school record, the ACC meet record, the tech school record, and he swam the fastest ever time for a freshman in the NCAA. Ivanov took home the bronze medal in the 100 fly and a silver medal in the 200 fly. Domínguez’s top converted times would have placed him in the A-final of the 100 free and the C-finals of the 200 and 500 free.

Pump the brakes on that…please…Needs to recruit the state of virginia better!