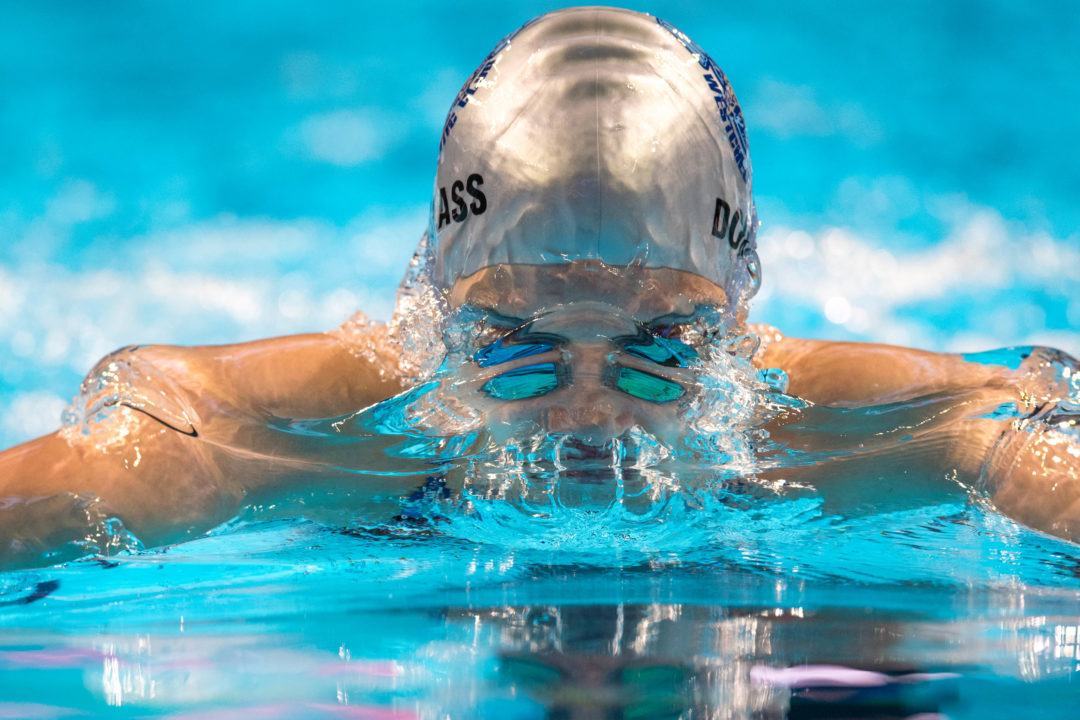 UVA freshman Kate Douglass stole the show on day one of the Trojan Invite with her double wins in the 200 IM and 50 free. Stock photo via Mike Lewis/Ola Vista Photography

The 2019 Trojan Invitational hosted by USC swam its first of 3 sessions on Friday night. The meet is following the NCAA 3-day championship event lineup, except that there are no prelims and finals, with each event run taking place in a single session. There were a few tweaks, especially with relays, where on night 1, teams swam 4×25 relay events. The meet is a combination of collegiate and professional swimmers, with USC playing host to competitors from Virginia, UC San Diego, CSU Bakersfield, and pro swimmers from Trojan Swim Club and Team Elite San Diego.

Friday’s evening session featured the 500 free, 200 IM, 50 free, as well as 100-yard free and medley relays. In the medley relays, Virginia swept both the men’s and women’s events. During the free relays to close the evening, the USC women and Team Elite men swam to victories.

Virginia newcomer Kate Douglass once again showed her powerful versatility on Friday with her double event wins in the 200 IM and 50 free. Douglass first won the 200 IM with a time of 1:55.15, holding off USC’s Tatum Wade (1:58.37) and Virginia teammate Abby Richter (1:59.24). Last season, Wade had the fastest October time nationally, a 1:57.89 at this meet. Douglass is already almost 3 seconds better than that this year. In fact, the only other time we could find for a swimmer going this fast in October of a collegiate season was in the 2017-2018 year, where Ella Eastin and Kathleen Baker each went 1:53.24 at the College Challenge meet that pitted the top Pac-12 collegiate swimmers against the USA Swimming National Team. Finishing fourth was 16-year-old Israeli record-holder Gorbenko (1:59.66).

SC’s men gonna be lucky to be top 25 come March.

Can’t get my head around how fast these October times are these days. October used to mean you were almost too sore from the early season weights & yardage to even pull yourself out of the pool.

Now we watch the same times in March

I’m pretty sure that’s a best for Douglass by a second, I think her best coming out of HS was 1:56.low. That’s very impressive for early October.

Why is Team Elite swimming at yards meets?

Probably looking for a race the same weekend as others doing a scm ISL meet?