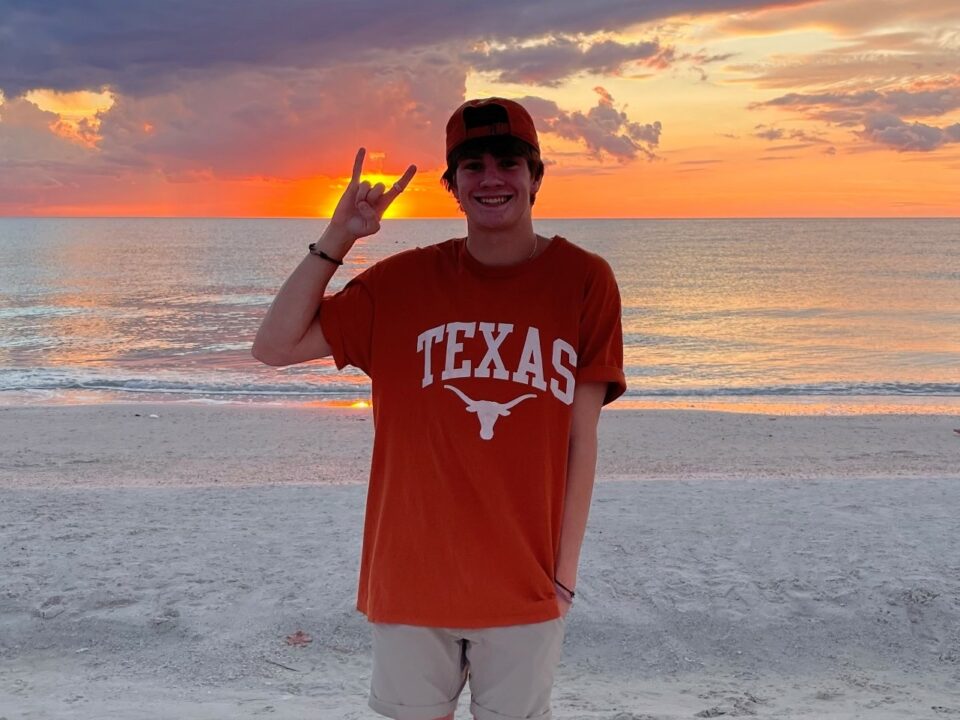 Alexander Turney from Salt Lake City, Utah has announced his verbal commitment to the University of Texas for 2022-23.

“I’m proud to announce that I have verbally committed to swim and study at the University of Texas. Thank you to all my friends, family, and coaches who have supported me through my swimming career. Hook ‘em!🤠🤘”

Turney has done most of his club swimming with Olympus Aquatics, but his family lived in Florida for much of the last year and he swam for Clearwater Aquatic Team over the summer. He won the 100/200 breast at Phoenix Sectionals in March, notching PBs in both events. A month later, he competed at St. George Sectionals and added new times in the 50 free, 100 fly, and 200 IM.

Some say even Will Licon wasn’t crazy fast or highly recruited at the time he was recruited, but really blossomed his last year in high school and of course in college. Who would have guessed how fast Licon would go in 200 IM and 100 breast scy?

I have a soft spot for the late bloomers.

What’s up with the downvotes to this? I guess y’all don’t remember Shaun Jordan, either, among others?

Will Licon was already on the Junior National Team, had won a Winter Junior title, and was 19th in the 200 breast at the Olympic Trials before he committed to Texas.

Don’t get this wrong, I appreciate you and what you’ve done with swimswam. I’m grateful to wake up to it everyday. What I was objecting to was your response to the idea that maybe young Turney could have as big a drop asWill did. On multiple occasions Ive seen you pull out the same trope complete with stats about how in actuality, Licon was already great before he got to Texas. You seem to relish pointing this out. All I would say is that there is a massive difference between finishing 19th at trials and being one of a handful who have won 4 different events at nc’s. That is a remarkable drop..why not wish that for young Turney here.… Read more »

Wow, that’s a big takeaway from a series of 3 facts. I wasn’t commenting as an Aggie, I was commenting as “the guy who wrote his original commitment article.”

Come on Braden, you’ve spent enough time on the 40 acres to know how this goes. They’re so used to the insular cult that they don’t know how to process when they feel like they’ve been slighted. Hell, you said a POSITIVE thing about a Texas swimmer, and they still found a reason to get mad.

Not a longhorn or part of an insular cult. UCSB grad and fan. Just pointing Braden’s occasional myopia. And yes Licon’s drops from hs to senior year at Texas were plenty nasty: 5 seconds in 100 breast; 7 seconds in 2im.

Congrats Alex! Gonna be a little different than Oly.

Correct. Meet Mobile shows that he swam butterfly leg of the relay.