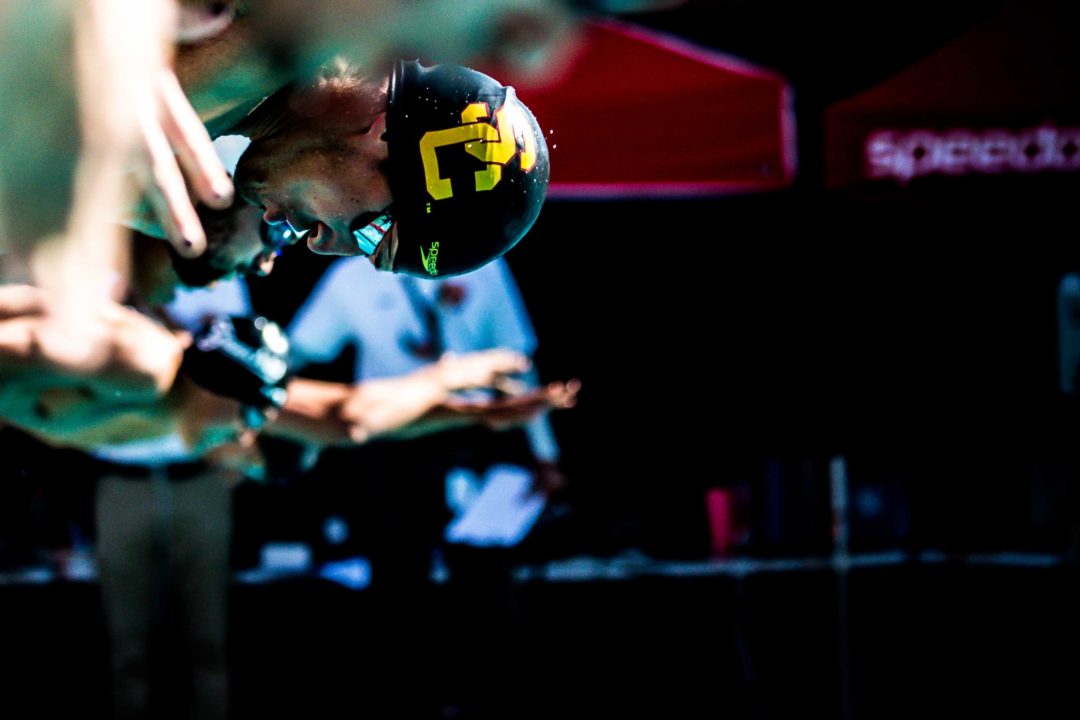 The swim was huge for Sancov, marking his first personal best performance since November of 2019.  Stock photo via Jack Spitser/Spitser Photography

The USC Trojans host the Utah Utes for a men’s dual on Friday and Saturday, sweeping the swimming events. Harry Homans, a USC sophomore, won 3 individual events on the weekend. On Friday, Homans took the 200 fly with a 1:44.59, touching first by well over a second. The time was just off Homan’s season best of 1:44.09, which he swam in January.

Homans, who transferred to USC from Georgia this season, then went on to win the 200 backstroke on Saturday. Touching in 1:43.68, Homans established a new season best by over a second. He was a bit off his personal best of 1:41.88, which he swam at last year’s SEC Championships. Homans also took the 200 IM, finishing in 1:49.08. That was another season best for Homans, coming in just slightly under his previous 2021 best of 1:49.22. Homans’ lifetime best 200 IM of 1:45.29 was also swum at last year’s SEC Champs.

Sophomore Harry Homans posted a pair of individual wins to guide the USC men’s swimming team to a 160-94 victory over Utah at the Uytengsu Aquatics Center on Saturday (Feb. 13.) Isabelle Odgers also won twice, taking the 200y breast and 200y IM in USC’s women’s swimming and diving loss to UCLA.

In his final swim at the Uytengsu Aquatics Center, senior Mario Koenigsperger finished first in the 200y breast, posting a 1:57.82. Justin Lum was second in 2:00.24.

During the final event of the session, USC’s A-relay of Miljenic, Sancov, Cruz Zuniga and Max Saunders, posted a 2:54.09 to win the relay.

In the diving well, sophomore’s George Korovin (344.55) and Nike Agunbiade both won on platform. Agunbiade finished with 268.20 to take the event. Freshman Tatsuya Machida was second for Troy with 245.60.

On the women’s side, seniors Jemma Schlicht and Marta Ciesla opened up the meet with a Trojan 1-2 finish in the 100y free. Schlicht posted a 48.87 and Ciesla was shortly behind in 49.30, beating UCLA’s Rachel Rhee by .01.

Aela Janvier extended the lead for the Trojans, picking up a win in the 200y back, and securing an NCAA B-cut with her time of 1:54.86.

In the final event of the day, the USC A team (Odgers, Ciesla, Dobler, Delgado) touched .04 seconds behind UCLA, finishing behind the Bruins A-relay that gave them the points needed to secure the dual meet win.

Both programs turn their attention to the Pac-12 Championships, which begin in less than two weeks (Feb. 24.)

Crosstown Cup
The winner of the USC-UCLA dual meet scores 10 points toward the Crosstown Cup, awarded annually to the school with the most successful athletic year against the other. Points are awarded to the winner of each Trojan-Bruin head-to-head contest (100 points is the magic number).

LOS ANGELES- The Utah men’s swim team fell 160-94 to USC at the Uytengsu Aquatics Center in Los Angeles on Saturday after completing the second half of races in the two-day dual. The Utes closed out the 2021 dual season posting four personal bests to wrap up the weekend.

Up next, the dive team will compete in the Pac-12 Diving Championships from Feb. 24-27 at the Hillenbrand Aquatic Center in Tucson, Ariz. Over the same dates, the Utah women’s swim team will travel to Houston, Texas to compete at the Pac-12 Swimming Championships at the University of Houston.