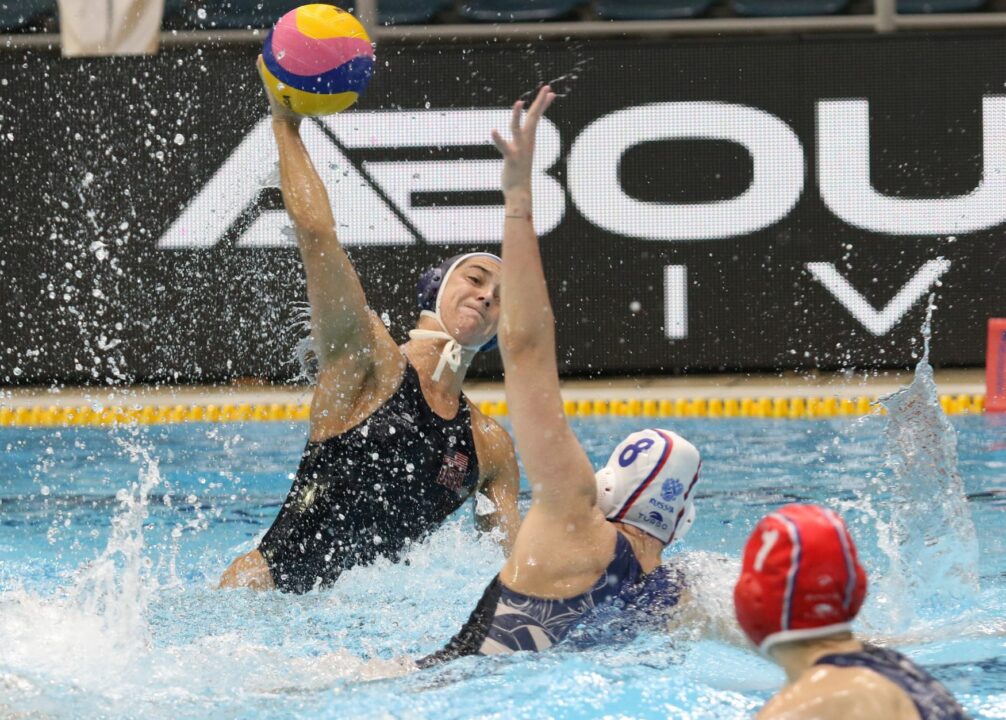 Team captain Maggie Steffens (above) has been named to her third Olympic team as Team USA is en route to win their third consecutive Olympic gold medal. Archive photo via fina-athens2021.com

Check-in here to see who’s racing at the Pro Swim Series, who’s prepping for NCAA’s, who’s retired, and who we’re not too sure about.

The WADA report from after the Tokyo Olympics criticized “the lack of anti-doping knowledge” of some CAS Anti-Doping Division members.

All 13 women are members of this year’s U.S. National team which is coming off a gold medal win at the Fina World League Super Final in Greece last week.

Team captain Maggie Steffens made her Olympic debut in 2012 at 19 years old. This will be her third  Olympic team and Melissa Seidemann joins Steffens as a third-time Olympian.

Although, head coach Krikorian emphasized that the team is not too fixated on that goal. “We don’t spend a whole lot of time … talking about trying to win a third,” he said when asked if he has talked about the three-peat goal as motivation for the team.

“This team is its own team and it stands alone as its own team … We never went into this process like we’re trying to defend anything.” He said the team is most focused on playing the best they can play.

Krikorian highlighted that the Olympic team was being announced on Wednesday, June 23rd, the 49th anniversary of Title IX being signed into law. The original law states “no person in the United States shall, on the basis of sex, be excluded from participation in, be denied the benefits of, or be subjected to discrimination under any education program or activity receiving Federal financial assistance.”

“The team that will sit before you is a direct result of what happened in 1972,” Krikorian said.

He mentioned two other holidays that take place on June 23rd:  Olympic and Paralympic Day and his daughter’s birthday. First, he remarked on the progress Team USA’s women have made due to programs like Title IX. For the latter, he teared up while thanking the team for giving his daughter role models she can identify with.

“The impact of what happened in 1972 has had a huge hand for our women on the Olympic stage. That year, 1972, Team USA women won 23 medals. Compare that to Rio when the women won an unbelievable 61 medals … something I know this team takes great pride in.”

Team captain Steffens then took the stage, thanking “the team behind the team” meaning the families of these athletes.

“It is such an honor for us to be up here … it’s more of an honor to get to share it with these women,” Steffens continued.

“We had a very challenging … past couple years. We faced endless adversity from postponement, pandemic…we always came out stronger…together. That’s where the magic lies with this team…Alone it didn’t feel possible but together anything felt possible throughout his experience. “

“We’re here to fight for one another,” she said.

The process of making this U.S. Olympic team been a unique experience, especially for repeat members of the Olympic team.

Krikorian listed some of the challenges the team faced during this past season including: “two traumatic experiences, lost loved ones, 3 fourteen thousand foot peaks hikes in one day … a week painfully sitting win silence, global pandemic, isolation …

“… loss of fitness, no hugs, annoying and awkward Zoom calls (with yours truly), lost teammates along the way, 453 days without a game, and 453 days of seeing your teammates as the opposition.”

Krikorian and other staff members were quick to thank a number of current and past U.S. National water polo team members who were not named to the Olympic roster today. “You’re seeing the stars at the top of the pyramid today,” said Ramsey before acknowledging and thanking the “base” of that pyramid, meaning everyone who has contributed to their journeys.

Krikorian specifically expressed his gratitude towards their collegiate and youth club coaches: “The impact of their previous coaches dating all the way back to when they first started the game…was phenomenal for each one of them.

“This process is never ever lost on me or my staff,” he said.

Kind of amazing how much experience this team has. You wouldn’t think people would have the opportunity to play for a long time in this sport given what I assume is minimal financial support and opportunities.

doing some research it looks like several of them are able to compete in professional leagues in europe and australia. that said, I’m sure they’re not raking it in

The good ones can make more than enough to survive (not in Australia, but Europe) and continue chasing their dreams. Plenty of time to work, not always enough time to compete at your peak.