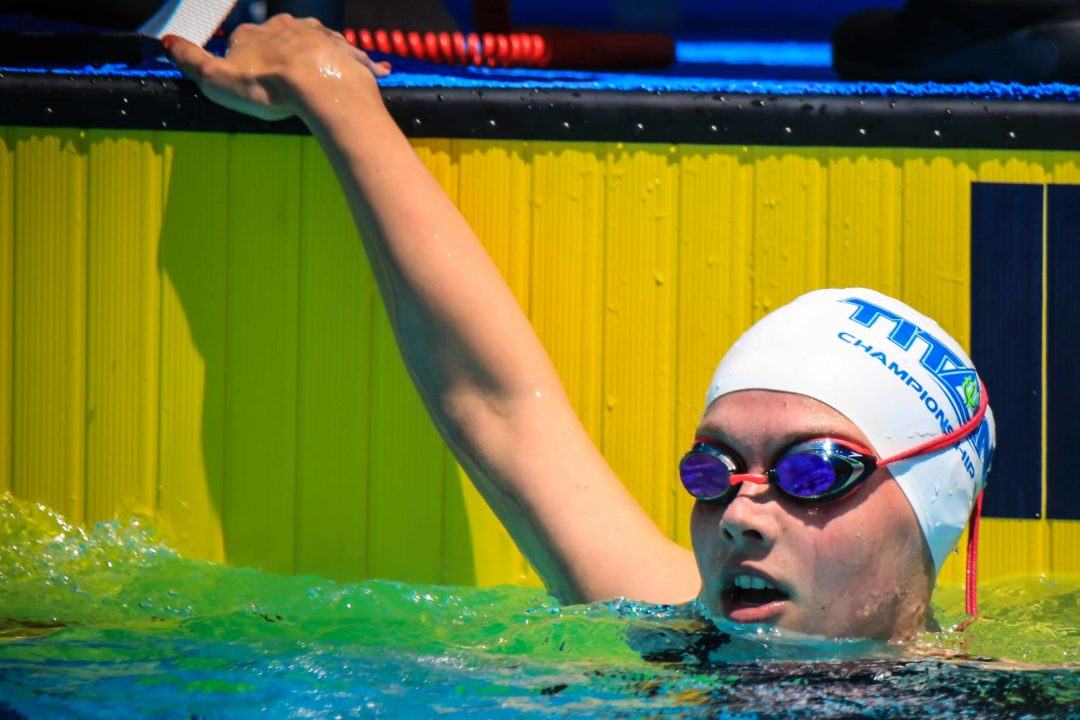 A unique set of circumstances in her first meet back from quarantine led to uncertainty about whether Claire Curzan's NAG Record would be ratified. Archive photo via Jack Spitser/Spitser Photography

2 weeks after Claire Curzan swam times faster than the 15-16 National Age Group Records in 3 events, USA Swimming has decided to ratify those times.

Clarifying that the existing policy of not allowing times to qualify for national-level meets from the month of July remains in-tact, USA Swimming decided that the policy didn’t specifically extend to National Age Group Records, though some around the organization were initially under the impression that the two policies were one-in-the-same.

This means that Curzan has 3 new National Age Group Records to her name:

The approval of the records by USA Swimming actually answers two questions. The first, more recently, is about whether times swum in July of 2020 would count. This came up recently as a result of USA Swimming’s policy for the first meets back after the height of the coronavirus quarantine, and by Saturday is a matter that will expire – times are back to normal in all regards in August (presuming all of the usual applicable rules are met).

The other question is one that has lingered for a while, but that has never been forced to be addressed. USA Swimming rules (and FINA rules) don’t allow for records to be set on relay leadoff legs, primarily because of the potential benefits of drafting if a female swimmer is racing head-to-head against a male swimmer. This came up most infamously at the 2007 Duel in the Pool, when Libby Lenton swam a 52.99 relay leadoff leg in a 100 free. That made her the first woman ever under 53 seconds in that race, but because she was swimming against Michael Phelps, FINA disallowed that swim.

The intrasquad meet for the TAC Titans, like many meets since the restart, threw swimmers of all genders into the same heats, so Curzan was racing boys in all 3 swims (though in one of those cases, she actually won her heat regardless).

A literal and esoteric reading of the USA Swimming rules, however, are very specific in disallowing leadoff legs in mixed relays from counting for National Records.

There is another rule in place that swimmers must win their heat to set a record, which Curzan only did in 1 of her 3 record-clearing swims. There is, however, an exception to that rule when the record being broken is “When age or representation is a condition for setting LSC or Age Group records.”

In this case, because it was a National Age Group Record, that loophole is filled. In the case that she broke an all-ages American Record, this loophole would have cleared her too, but if she had broken a U.S. Open Record, this specific rule would not have cleared her – so that hypothetical situation (it’s never happened) has not been answered by this approval.

USA Swimming confirmed that the meet had electronic timing and manual timers in place for each lane, information that helped them to ratify the records.

Curzan now holds 12 active National Age Group Records: 10 in short course and 2 in long course. Having just turned 16 a few weeks ago, she has almost a full year to continue going after the 15-16 record books.

if you’re going to give voice to that sentiment, you really ought to change your name.

Big fan of Dahlia. But I think this is a prescient take. In 2020 it would have been close. With another year, that favors the youngsters. And when you see what Curzan just did in yards…. 👀

It’s the regression that is worrisome for Dahlia.

She is not the only one, look at Sjostrom since fall of 2017 (after World Champs)

This is wrong. There were clearly stated conditions in place saying times in July do not count outside the state or LSC. I’m very proud of Claire and respect her talent immensely. But this is wrong. It’s a special favor granted in retrospect. I can’t agree with the decision. She’ll have other LEGAL opportunities. When you also add in the mixed nature of the heats it’s absurd. Bad decision that isn’t fair to the current NAG holders. I’m disappointed. Again, love Claire Curzan. But this is wrong.

If you really respected Claire, you’d have the gumption to say this to her face or with your name attached and not post it anonymously on the internet.

All this comment shows is an utter lack of respect.

The disrespect is to USA Swimming, who is not holding to their own standards. It is clearly only love towards Claire. The times should not count as NAGs based on USA Swimming’s own statements. This takes nothing away from the incredible swims, or Curzan. Only from the corruption and lackospineiosus that is displayed by USA Swimming.

Show us the statement where anyone with any authority at USA swimming ever said national age group records wouldn’t count. I’ll wait.

Well let’s see…
Statement made June 27th: USA Swimming has announced that it will allow competitions to resume in July with some restrictions.
However, times achieved during meets in July will not count towards qualification for any USA Swimming programs.
USA Swimming rule book:
205.9.1 (paraphrased) National Age Group records must meet FINA regulations for records

FINA does not record records set in mixed races.

Also:
USA swimming rule 104.2.1
F) To be eligible for a record a swimmer must have won his/her heat. Only the time of the winner is recognized for record purposes even though another swimmer may have a faster time but is displaced by judge’s or ballot decision.

That’s a paraphrasing in an article about it on SwimSwam. Show me the actual statement from USA Swimming that says that swims in July don’t count for National Age Group Records.

Times submitted for recognition shall be achieved in the recognized events in 102.1.2 and in accordance with 102.24.1C in any USA Swimming Sanctioned or Approved competition, USA Swimming Observed Swims, or meets sanctioned by FINA or FINA members and accepted for national times reporting by USA Swimming. These meets must be conducted between September 1 of one calendar year and August 31 of the next calendar year.

With your thinking that the mixed nature of the heats should disqualify the ratification… Please say that to all masters swimmers who, outside of the masters World Champs, race in mixed heats and set records that way.

Now, if you only were talking about the blanket statement of not counting anything outside of state records… That statement was made by USA Swimming… And they can choose to back track that statement to ratify amazing swims like Claire produced, if they so wish.

Masters swimming is governed by USMS, not USA Swimming.

You raised valid points BUT from my one experience, I have also received a favorable decision (within 3 weeks) from USAS validating a swimmer’s NAG if all relevant documents are submitted within the allowable time period for review. USAS may question adults but they clearly support AG swimmers.

US sporting federations don’t seem as bound by their own stated rules or policies as their European counterparts. It’s something I’ve noticed in Athletics (T&F) in recent years too.

Did staff make this decision or the head of Rules and Regs? Clark Hammond should have final say on the legitimacy of the records in a mixed gender heat.

Did head of rules and registration make the original decision to allow sanctioned meets where the times only count for local use or was that staff?

That was definitely staff.

Actually, the whole reason it was a question in the first place was because the conditions WEREN’T clearly outlined. They did not specifically state July times couldn’t count as NAGs. It was a gray area from the beginning.

But why am I even explaining it if you clearly didn’t read it the first time? Maybe next time make sure you’ve read the article you’re about to comment on.

Anyway, it’s not really worth getting mad about, as two of the NAGs were already hers anyway (50 free and 100 fly), and she’ll probably drop so much time in the 100 free before she turns 17 that such a minor technicality will end up a footnote in swimming history.… Read more »

The decision to not count times towards all time standards was wrong. The Decision to count these times is right. The concept of keeping a level playing field by only allowing times to count locally is flawed. There is no level playing field at any point. This was akin to deciding that there will be no long course time standards for national meets because some areas of the country do not have the same access to long course pools. If you felt(or feel) penalized by your area not having access to practice or meets right now take comfort in the fact that when all is back to normal you actually have the the needed facilities.

I agree! If this is allowed, then all the times in July should count towards National meets as well!

Many age group records are set in Senior competitions with faster swimmers already.

I’m surprised but happy for her. We certainly will see many more mixed events now as it undoubtedly provides an advantage for elite female swimmers. Bring it on!

If a kid or teen can swim faster under the compromising conditions that everyone has had then we should reward them. The deck is never fairly stacked- certain kids have always had better facilities, better coaching, whatever. We shouldn’t put barriers up for kids and their developments.

Am I the only one who read the headline and immediately had to google “ratify definition” ??

That’s kinda sad….. I hope this is not the case for anyone else that is a high school graduate and read this article.

I went to a decent university AND GRADUATED.

If you had a legal swim at a sanctioned or recognized event (pre-Covid or after July), then yes. USA-S rules are permissive, unless the rules state otherwise.
Congrats Claire! Amazing swimming!

@JBS nailed it. If the rules and sanctions don’t exclude it then it’s good. Rules explicitly permit mixed gender heats and rules approve NAGs swum according to the rules. The July sanction limitation was also explicit that times wouldn’t count for qualifying for camps or meets above the LSC level. Not including records in that sanction limitation spoke volumes. It also makes sense. Camp or meet qualification could be taking away from someone who didn’t have the same opportunity this year. NAGs are for all time. If we don’t exclude super suits and don’t exclude times swum with (insert modern tech here such as non-turbulent lane lines, gutters, deep pools, tech suits, etc.) then someone who swam the fastest ever… Read more »