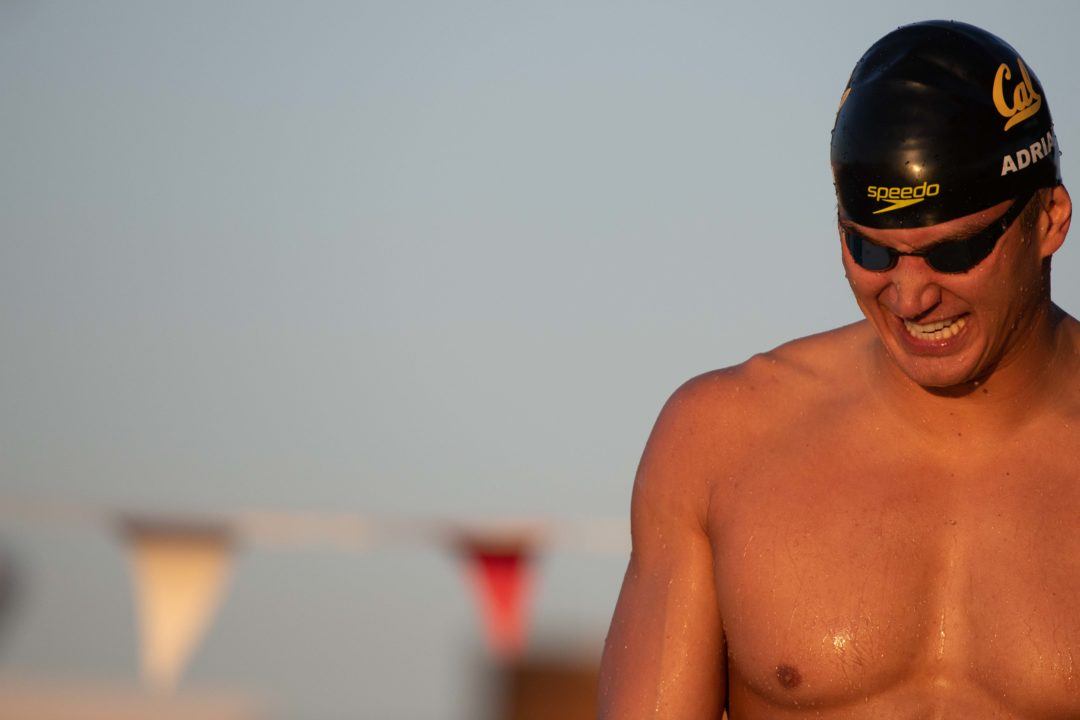 Nathan Adrian (above) was also a captain at the 2017 World Championships and 2016 Olympic Games. Archive photo via Mike Lewis/Ola Vista Photography

USA Swimming has named 4 swimmers as captains of the 2018 Pan Pacs team: Nathan Adrian, Matt Grevers, Allison Schmitt, and Leah Smith. Three of those four swimmers are returning members of the Pan Pacs team who also competed in 2014, with Schmitt missing that team (though she swam at the 2010 edition). Adrian was also on that 2010 team.

The men’s captains Adrian and Grevers are the same as were named for last year’s World Championships, while Adrian and Schmitt were also captains on the 2016 Olympic Team.

The quartet have combined for 24 Olympic, 31 Long Course World Championship, and 13 Pan Pacific medals in their careers. Smith is the youngest of the group at just 24, Grevers the oldest at 33, while Schmitt is 28 and Adrian is 29.

The United States led the medals table at the 2014 edition of the meet with 43, including 16 gold, 13 silver, and 14 bronze. Australia was the next-closest nation with 28. The U.S. returns only one individual gold medalist from that edition, Katie Ledecky, but Adrian (100 free) and Grevers (100 back) each won silvers, while Smith took an 800 free relay gold. Adrian (1 silver, 1 gold) and Grevers (1 gold) also earned relay medals at that meet.

The U.S. is currently training at Soka University Aliso Viejo before leaving for Tokyo on August 4th.

This is the Team i had in mind – Perfectly balanced !!!! Yeah

As all things should be

Dressel should be a captain.

Because he is a transcendent talent. God forbid USA swimming tries to promote someone that could expand interest/viewership beyond only the most hardcore fans.

He just got his ass kicked three out of four times. He’s got enough on his plate.

@JRKAY Perhaps you might know if the Pan Pacs have special races for team captains….

Nonetheless, leadership is always more than performance; it is also part character, charisma, thoughtfulness, and compassion. There have been articles and videos on this site where swimmers like Dressel extolled the leadership of people like Adrian & Grevers; if you watched the Nats, it was clear how much Schmitty meant to the swimmers and the crowd.

No one is thinking, “hmm maybe I’ll get into swimming the only year where there’s not an Olympics or world championships. Wonder who the captains are?” USA swimming is going promote the hell out of Dressel when the time comes because he’s the fastest

Adrian and Grevers are both seasoned veterans, experienced leaders, dope personalities, and awesome ambassadors for the sport. While they’re around, they’re the best candidates. Can you imagine a pre meet speech from those two? Who wouldn’t be hyped?

Dressel will get his chance no doubt and he will be fantastic. He’s still pretty young.

I hear you. But just naming the oldest guys seems shortsighted. Admittedly, I didn’t realize the team voted on captains when I said USA swimming should be focused on promoting Dressel. In most (all?) mainstream (read: vastly more popular) sports, the best/most talented athletes are the captains.

Oldest? I suspect age has little to do with it except for building a reputation with other swimmers over time. Phelps and Lochte (Lochte…surprised) were not selected as team captains in 2014 and were “older” than most other swimmers. As far as promoting the brand I don’t think team captains are even known except by very serious fans.

Phelps went to pan pacs. He got his second dui after pan pacs, which made him ineligible for kazan.

@Kristiina – If you are referring to team captain, Smith, its Leah Smith, 23 and not Regan Smith, 16. And it is Crohn’s disease not chronic.

well , the good news for you is : Swimming dont follow the other sports habits …..

No. It’s bad news for fans of swimming that want to see its popularity increase, myself included.

JRKay – you’re making an apples-to-oranges comparisons. Yes, in the NBA and the NFL, the captains are also best players. But, that comparison is the one made to, say, team captains at the University of Florida.

On national teams/combined teams, the captain is often not the best player, rather it’s the most experienced, or the one who has shown the most commitment to the team. Carmelo Anthony, for example, was the captain of the US Men’s Olympic Basketball Team in 2016. That’s a team that included Kevin Durant. But, it was Carmelo’s 4th Olympics – he was clearly the most committed player to that team, and most experienced player on it, though clearly not the best, certainly not by that… Read more »

Appreciate the thoughtful response. I understand your points and they make sense. I just want what’s best for the popularity of the sport. I think some are too beholden to traditions that are possibly counterproductive to that objective, but you have honestly changed my mind. Bravo.

To that point —- people weren’t tuning in to see Captain Carmelo.

I would say the majority of the time, people are not even aware that there are team captains when it comes to national/olympic teams so this may be a moot point. People tune in to see the best swimmers regardless. People want to see fast swimming! I can’t think of any moment where team captains are brought up in primetime swimming except within those knowledgeable of it in the swimming community and here on Swim Swam.

So in 2014 Matt Grevers and Anthony Ervin where team captains. Phelps was there, Lochte was there so it is clear performance is not the top thing the team looks for in a captain. Most of the swimmers on these teams have encountered on deck or been on teams with the more senior swimmers. Much like many other teams selecting their own leaders it has a lot more to do with personality, Motivation and inclusion than raw performance.

Great reasoning. We have done it incorrectly in the past, so that can never change! Phelps not being a captain is beyond incomprehensible.

When was his DWI? Did he interact with other swimmers on deck, or have his own private area on deck that it was known to not violate? He did make team captain for the Olympics in 2016, but not before. He might have had a change of heart/personality after DWI, getting married, that showed to other swimmers. Not sure.
I guess what I’m saying is a team captain is selected because the team thinks they will make the TEAM better not just themselves…

When you make the team, you can vote for who *you* want to be captain.

Using your logic, no one except those athletes on the Pan Pacs squads should be able to voice their opinion about who should be captains? Cool idea did the comments section of a swimswam article.

Hmmmm u are going too fast here ……Captains are often multi Olympic medalists with years of experience on the highest level . Period

They were voted on by their teammates. You’d have to ask them, and I’d bet the house that none of them would tell you.

I assume the men swimmers pick the men’s captains and women pick women’s captains, versus whole team selects both sets. Anyone know?

If Dean Farris decided to make the team, he would be all 4 captains

Something about her – does anybody else think she can challenge Ledecky in 2020??