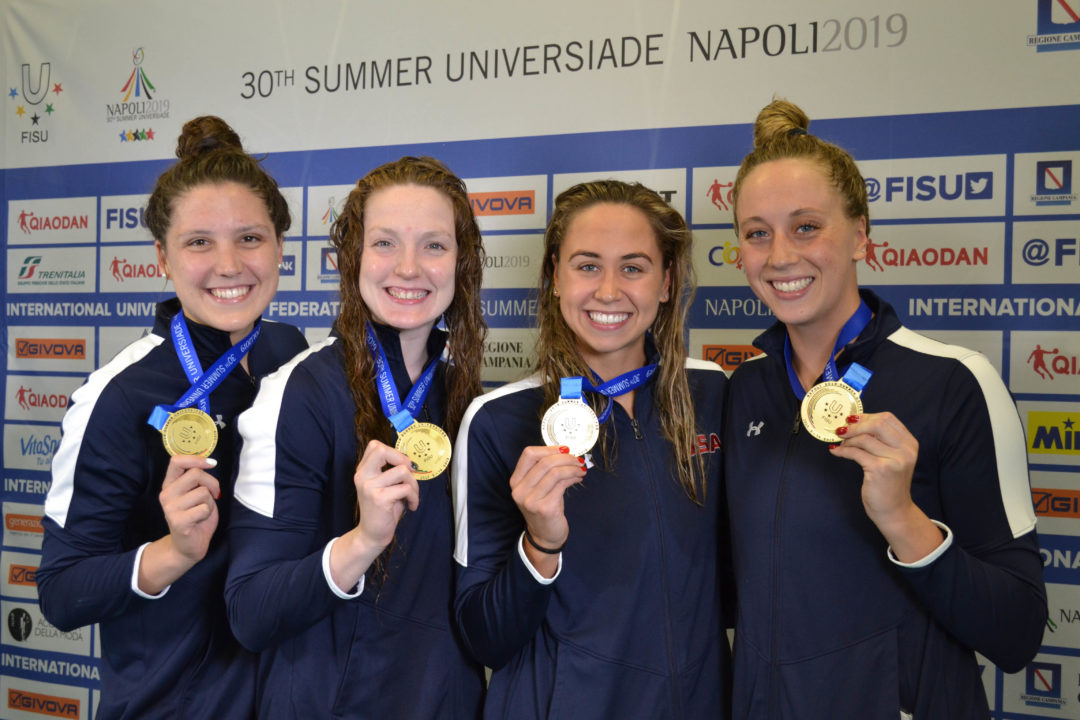 The United States leads the official medal table with two golds at the conclusion of the first day of competition at the 2019 World University Games. The Americans won both the men’s 400 free relay final (3:11.03) and the women’s 400 free relay final, the latter with a new meet record of 3:37.99. Standing atop the men’s podium for the United States were Zach Apple, Dean Farris, Robert Howard, and Tate Jackson. Michael Jensen swam in prelims. The winning women’s relay consisted of Veronica Burchill, Claire Rasmus, Catie DeLoof, and Gabby DeLoof. Claire Adams participated on the relay in prelims.

Japan and Italy finished second and third, respectively, in the women’s 4×100 free, while Brazil and Italy scored respective silver and bronze medals in the men’s relay.

Japan picked up a gold in the men’s 400 free, with Keisuke Yoshida coming from behind to win in 3:49.48. Italy’s Matteo Ciampi earned the silver medal in that race, while Russia’s Anton Nikitin took home the bronze.

The results of the women’s 400 IM, the fourth final of the evening, have not yet been certified. Great Britain petitioned the International University Sports Federation (FISU) on behalf of Abbie Wood who missed the final because she didn’t hear the start. It is our understanding a ruling will be made tomorrow morning. If the results of the women’s 400 IM stand as swum, the United States will pick up another gold and a silver, as Makayla Sargent and Evie Pfeifer went 1-2. Sargent broke the meet record with a PB of 4:37.95 Pfeifer just touched out Ilaria Cusinato of Italy for the silver. Therefore, if Great Britain loses its appeal, the amended medal table for Day 1 will be: